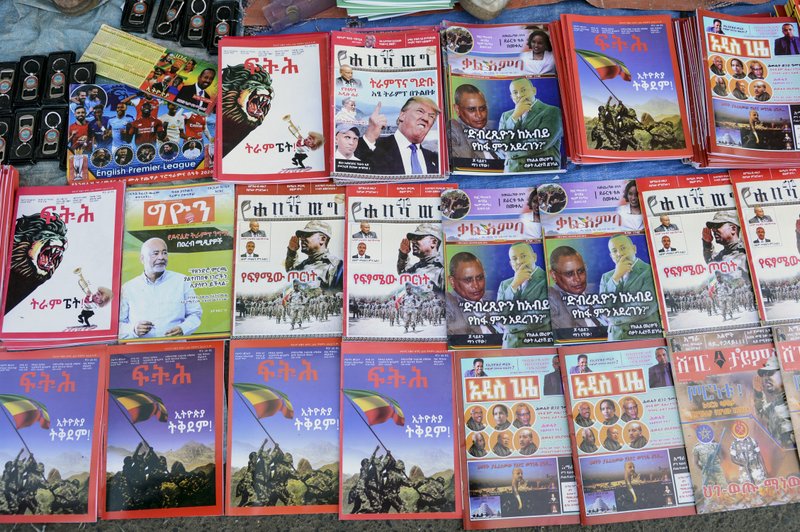 1 of 2
Newspapers and magazines reporting on the current military confrontation in the country are seen at a news stand on a street in the capital Addis Ababa, Ethiopia Saturday, Nov. 7, 2020. Ethiopia moved Saturday to replace the leadership of the country’s defiant northern Tigray region, where deadly clashes between regional and federal government forces are fueling fears the major African power is sliding into civil war. (AP Photo/Samuel Habtab)

NAIROBI, Kenya (AP) — Ethiopia’s prime minister announced major changes to his government’s military and intelligence leadership on Sunday as he sought to defend a growing military action against the country’s defiant Tigray region, and urged citizens not to target the ethnic Tigrayan people amid fears of civil war.

At least 60 people have been wounded and six killed in one location along the Tigray border alone, Doctors Without Borders said Saturday, and the United Nations warns of a major humanitarian crisis if up to 9 million people flee all-out fighting or the Tigray region remains largely cut off from the world.
ADVERTISEMENT

Prime Minister Abiy Ahmed’s cabinet reshuffle included little explanation but appeared aimed at bringing the most outspoken supporters of the operation in Tigray to the forefront.

Birhanu told the state-owned Addis Zemen newspaper that several locations in Tigray including Dansha, Barken and areas from Shiraro to Shire are now under the federal army’s control after the military operation began Wednesday. “The army has destroyed all the heavy weapons controlled by the infidel group. Now it is marching forward,” he said.

The Tigray government, the Tigray People’s Liberation Front, made its own claim.

Communications remain almost completely cut off in Tigray, with airports and roads closed, complicating efforts to verify either side’s assertions. Each accuses the other of starting the fighting.

The conflict in Tigray pits two heavily armed forces against each other in the heart of the strategic but vulnerable Horn of Africa region, and experts worry that neighbors including Sudan, Eritrea and Somalia could be sucked in. The federal and Tigray governments, once allies in Ethiopia’s ruling coalition, now regard each other as illegal, the result of Abiy’s political reforms after taking office in 2018 that left the once-dominant TPLF feeling marginalized and targeted.

Diplomats and others assert that the conflict in Tigray could destabilize other parts of Ethiopia, Africa’s second-most populous country with 110 million people, scores of ethnic groups and other regions that have sought more autonomy even as the Nobel Peace Prize-winning Abiy tries to hold the country together with exhortations of national unity.

The Tigray leader in a letter to the African Union chair, seen by The Associated Press, has warned that Ethiopian forces are preparing to launch a large-scale offensive. Debretsion Gebremichael also appeared open to talks, saying the AU was well-placed to bring parties to dialogue to “avert an all-out civil war.”

Pope Francis on Sunday said he was following “with worry” the news from Ethiopia and exhorted people to “reject the temptation of armed conflict.”

With international pressure on Ethiopia’s prime minister growing, he has issued several statements seeking to defend what he calls a “law enforcement action” while his own military officials speak in terms of war.

Abiy’s on Sunday accused the TPLF of trying to undermine his rule and “make the country ungovernable by instigating clashes along ethnic and religious lines.” He accused the TPLF of a “massive military buildup” in an attempt at intimidation, and he again took aim at the local election Tigray held in September, calling it illegal.

Abiy’s message, delivered in English, rejected any idea that the federal government was “equal with criminal groups,” again seeming to slam the door on any dialogue with the TPLF

Tigray, for its part, has objected to the postponement of national elections until next year because of the COVID-19 pandemic, which extends Abiy’s rule.

Concerns are growing that tensions over the conflict could lead to the targeting of ethnic Tigrayans. Abiy urged “all Ethiopians to take responsibility for ensuring that Tigrayans do not fall prey to any illegal activity that follows the government’s actions.”

On Saturday the mayor of Addis Ababa, Adanech Abebe, announced the arrests of 10 city officials in the capital, accusing them of being “keen to carry out terrorist activities.” 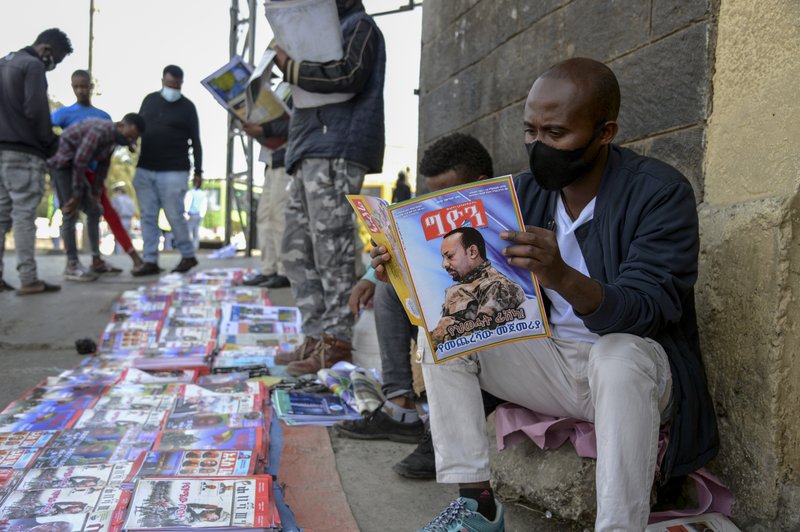 Neither side appeared ready for the dialogue that experts say is needed to avert disaster in one of the world’s most strategic yet vulnerable regions, the Horn of Africa.

The upper house of parliament, the House of Federation, voted to set up an interim administration, giving Prime Minister Abiy Ahmed the power to carry out measures against a Tigray leadership his government regards as illegal. They include appointing officials and facilitating elections.

The prime minister, who won the Nobel Peace Prize last year, asserted that “criminal elements cannot escape the rule of law under the guise of seeking reconciliation and a call for dialogue.”

Experts and diplomats are watching in dismay as the two heavily armed forces clash. Observers warn that a civil war in Ethiopia, Africa’s second most populous country with 110 million people, could suck in or destabilize neighbors such as Sudan, Eritrea and Somalia.

“It’s a very, very bad situation,” Audrey Van der Schoot, head of mission for aid group Doctors Without Borders in Ethiopia, told The Associated Press. Heavy shelling resumed Saturday morning, for the first time since Wednesday, near the group’s outpost in the Amhara region by the Tigray border. It was so close, Van der Schoot could hear it over the phone.

The clinic has seen six dead so far and some 60 wounded, all combatants from Tigray and Amhara, she said, adding that shelling came from both sides.

A statement posted Saturday on the Facebook page of the Tigray government, the Tigray People’s Liberation Front, asserted that it will win the “justified” war, adding that “a fighter will not negotiate with its enemies.”

In a letter to the AU chairman, South Africa’s president, Tigray leader Debretsion Gebremichael alleged that Ethiopia’s federal government and neighboring Eritrea have mobilized their forces near the Tigray border “with the intention of launching a full-fledged military offensive.”

The letter dated Friday, seen by The Associated Press, called Abiy’s behavior “unconstitutional, dictatorial and treasonous.” It said the African Union was well-placed to bring parties to dialogue to “avert an all-out civil war.”

The conflict is playing out between former allies in Ethiopia’s ruling coalition who now regard each other as illegal. The TPLF long dominated the country’s military and government before Abiy took office in 2018 and introduced sweeping political reforms that won him the Nobel. The changes left the TPLF feeling marginalized, and it broke away last year when Abiy sought to turn the coalition into a single Prosperity Party.

Clashes began early Wednesday when Abiy accused the TPLF forces of attacking a military base in Tigray. In a major escalation Friday, Abiy asserted that airstrikes in multiple locations around the Tigray capital “completely destroyed rockets and other heavy weapons.”

The military operations will continue, the prime minister said, and he warned the Tigray population: ”In order to avoid unexpected peril, I advise that you limit group movements in cities.”

Tigray is preparing for a “major offensive to come tomorrow or the day after from the federal government,” Kjetil Tronvoll, a professor at Bjorknes University College in Norway and a longtime Ethiopia watcher, told the AP. “That’s my estimate. Abiy has promised a quick delivery of victory, so he has to move fast.”

Ethiopia’s decision to replace the Tigray leadership leaves the region with essentially two options, he said: pursuing a “full-out war” with the aim of toppling Abiy’s government or declaring independence.

Encircled, the TPLF can’t afford a drawn-out conflict and might fight its way to the capital, Addis Ababa, or toward the Red Sea for an outlet, Tronvoll said.

He described one published estimate of Tigray having nearly a quarter-million various armed forces a “serious underestimate” and said they outnumber the federal army “by at least two or three multiples.” Addis Ababa has called for reinforcements from other regional forces, he said.

Communications remain almost completely severed with Tigray, making it difficult to verify the rivals’ assertions and leading aid groups and human rights groups to warn of a brewing humanitarian disaster.

A new United Nations assessment lists eight “recent military confrontations” across Tigray, most near its southern border with the Amhara region. The blockage of air and road networks significantly affects aid to more than a half-million people, the assessment said, and an escalation of fighting could “seriously increase” that number and send millions fleeing.

What’s more, “there is a concern that the vacuum left by security forces re-deployed from other critical areas may incite more ethnic violence including attacks on ethnic minorities” in other parts of Ethiopia, the U.N. report said.

Dino Mahtani with the International Crisis Group, in comments posted Friday, said that if the Tigray forces come under pressure they may “punch into Eritrea, which would then internationalize this conflict.” The TPLF and Eritrea have a bitter history of a long border war between Ethiopia and Eritrea before the countries made peace in 2018.

The TPLF’s only other real avenue out of Ethiopia is Sudan, which finds itself “in a very delicate position,” Mahtani said.

The Tigray drama dominates conversation in Ethiopia, and many people commenting on social media appear to support the government’s move to get rid of the region’s leadership. Some cite abuses by the TPLF while it was in power for well over two decades, or echo the federal government’s accusation that it incited recent violence across the country.

Those sympathetic to the TPLF are mostly silenced due to the communications blackout in Tigray, but those able to comment describe the federal government’s actions as an aggression that will lead to further escalation of the conflict.
___

« WHO ARE THE FOREIGNERS THAT ARE WORKING WITH UGANDA’S OPPOSITION??? (Previous News)
(Next News) Bobi Wine, the pop star who would be president of Uganda »