Ethiopian Prime Minister Abiy Ahmed has been seen weeping at a memorial for the army chief of staff who was shot dead in an alleged coup attempt on Saturday.

Gen Seare Mekonnen was reportedly assassinated by his bodyguard as part of a plot to seize power in the northern region of Amhara.

Officials say the bodyguard is being treated for his injuries, contradicting an earlier claim that he was dead.

The alleged ringleader of the coup was shot dead on Monday, police said.

Brig-Gen Asaminew Tsige was reportedly killed as he tried to escape from his hideout in Amhara’s capital, Bahir Dar.

The internet has been shut across Ethiopia, after a brief resumption in service that followed an unexplained blackout lasting more than a week.

Mourners paid their respects before flag-draped coffins bearing the bodies of Gen Seare and Gen Gezai Abera, who was assassinated with him.

Mr Abiy was filmed wiping away his tears while soldiers eulogised the dead men.
In a statement on state media on Monday evening, Ethiopian federal police apologised for having earlier said that the alleged assassin, Gen Seare’s bodyguard, had killed himself.

The latest statement from the police said the bodyguard, who has not been named, was being treated for gunshot wounds in hospital. It is not clear if the injuries were self-inflicted.

This has been a sombre ceremony full of religious and military symbolism. Priests from the Ethiopian Orthodox Church led the prayers, chanting hymns for the dead. The top brass of Ethiopia’s military would later line up, one by one, as they saluted in front of the caskets of the killed generals.

Prime Minister Abiy wept throughout the ceremony, his head in his hands. As one general broke down while paying his tributes, Mr Abiy reached out to embrace President Sahle-Work Zewde. Both were in tears. There were tributes from Gen Seare’s son and his colleagues, who all described him as a loyal servant.

Hundreds of people turned up from early morning. The majority were locked out with no space to accommodate them in the hall. After the memorial, Gen Seare’s coffin, draped in the Ethiopian flag, was flown to his birthplace in the northern region of Tigray for burial.

The attack on Gen Seare and Gen Gezai on Saturday came hours after gunmen in Bahir Dar killed the governor of Amhara, Ambachew Mekonnen, along with two senior officials.

The government described the events as a co-ordinated attempt to seize power in the northern region. State officials told local television on Monday that Brig-Gen Asaminew had been present at the killing of the governor.

What has been the response to the alleged coup attempt

Mr Abiy has urged Ethiopians to unite against “evil” forces set on dividing the country.

The weekend’s assassinations represent the biggest challenge yet to his year-old government, which has undertaken sweeping reforms to the security apparatus.

The BBC’s Emmanuel Igunza says there is clearly still significant opposition within the military to the prime minister’s style of leadership.

The US, a key ally, has condemned the unrest, saying it was probably linked to “vestiges of the old regime” unhappy with Mr Abiy’s reforms.

Why did the alleged coup take place?

While details are still unclear, news of Gen Asaminew’s alleged bid for power was not a surprise for some Ethiopians.

He was a member of the Amhara, the country’s second largest ethic group. He had a reputation for hardline ethnic nationalism and had previously called for the Amhara people to have greater autonomy.

This month, in a video on social media, he openly advised the Amhara to arm themselves. He had been serving as Amhara’s regional security chief and was said to have a significant following among young people.

He was among a group of high-ranking military officers released from prison early last year when the government moved to free political detainees in response to public pressure.

The general had been in custody for nine years for allegedly plotting a coup.

Gen Asaminew also had a bad relationship with the regional government of neighbouring Tigray province. The government claimed that Gen Seare and Gen Abera had been killed because they came from the minority Tigray ethnic group.
What has been Mr Abiy’s record in office?

Since his election last year, he has moved to end repression by releasing political prisoners, removing bans on opposition political parties and overseeing the prosecution of officials accused of human rights abuses.

But his reforms have taken on powerful interest groups in the military and the ruling coalition.

Mr Abiy survived a grenade attack at a rally a year ago on Sunday, which killed two people and left more than 100 injured.

Africa’s oldest independent country, Ethiopia is also the continent’s second most populous after Nigeria, with 102.5 million inhabitants from more than 80 different ethnic groups.

A transfer hub for long-haul air travel, it has one of the fastest-growing economies in the world, but a vast number of young Ethiopians are without work. 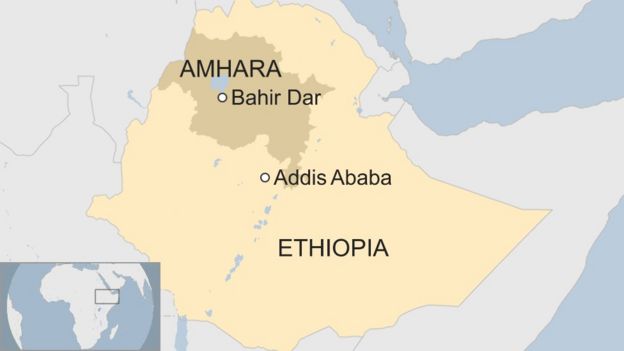 « NTVUganda has added King Oyo checks in on Cranes ahead of Zimbabwe match video (Previous News)
(Next News) Hacker Used $35 Computer To Steal NASA Data. They Found Out A Year Later »