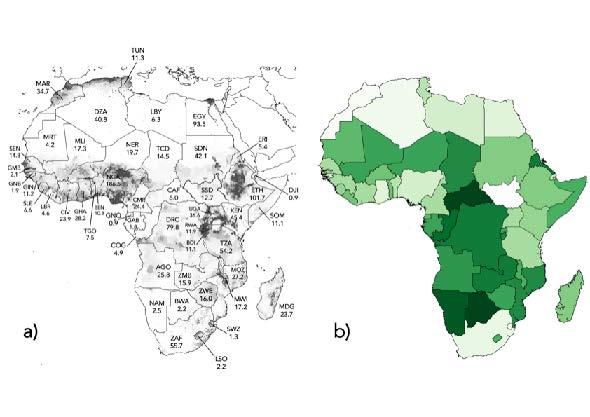 
Africa is projected to be home to nearly 3 billion people by 2100, but rapid population growth will cause widespread environmental degradation unless effective family planning becomes widespread policy, according to new research that tracked increased population pressures on the continent’s ecosystems.

Researchers from Flinders University and the University of Helsinki have examined the environmental impacts of population density, variation in the distribution of wealth among citizens, and a country’s overall economic activity across the African continent.

“Our finding that the strongest predictor of environmental performance among nations in Africa is population density means that countries with the most people suffered relatively more environmental degradation on average,” says lead researcher Professor Corey Bradshaw, from the Global Ecology Laboratory at Flinders University.

“The result brings into question the reality of the United Nations’ Sustainability Development Goals because none of the targets mentions reducing human population size as a pathway to achieving their goals.”

“Dedicated family planning and government policies that attempt to limit population growth and promote economic development that does not compromise environmental integrity are needed to support sustainability across Africa.”

The findings — published in the Nature journal Scientific Reports — come after a new United Nations report found that the fastest population growth on Earth is most likely to occur in sub-Saharan Africa, which is expected to double its population in the next 30 years.

“Given the rapid growth of its population, Africa stands to lose many of its already threatened species and ecosystems over the coming decades, especially as overseas demand for timber, minerals, fuels, agricultural products, seafood, and wildlife increases” says co-author Dr Enrico Di Minin, a conservation scientist at the University of Helsinki.

Dr Di Minin highlighted that while there are many policy levers that African nations can use to improve the future state of their environments and the societies that depend on them, limiting excessive human population growth will likely facilitate the best results.

“But there is some relatively good environmental news in at least parts of Africa”, states Professor Bradshaw. “Despite having other problems, countries like Central African Republic, Botswana, Namibia, and Congo have been doing a lot better then many of their neighbours in the environment stakes”.

“But some of the worst environmental performers are densely populated countries like South Africa, Algeria, and Nigeria”, Professor Bradshaw warns.

“As pressures on the environment grow, most African nations will have to focus on mitigating the negative interactions of high population growth and unsustainable development if they want to have any chance of maintaining the beautiful, rich, and unique animals and plants for which Africa is famed”.