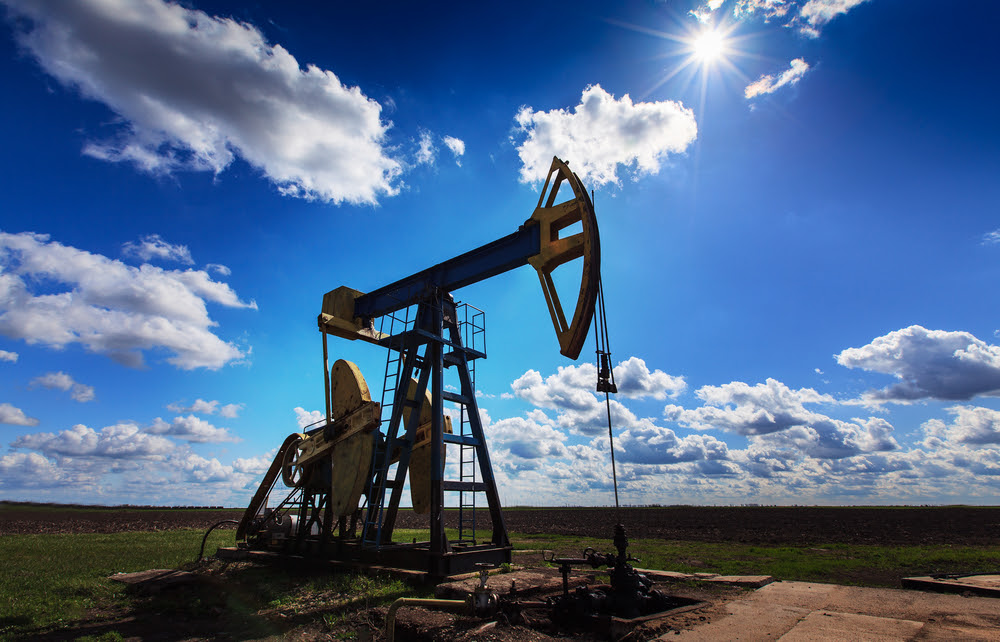 Crude oil prices fell on news that Saudi Arabia has declared a partial cease-fire in Yemen, a move that could significantly ease tensions across the region. 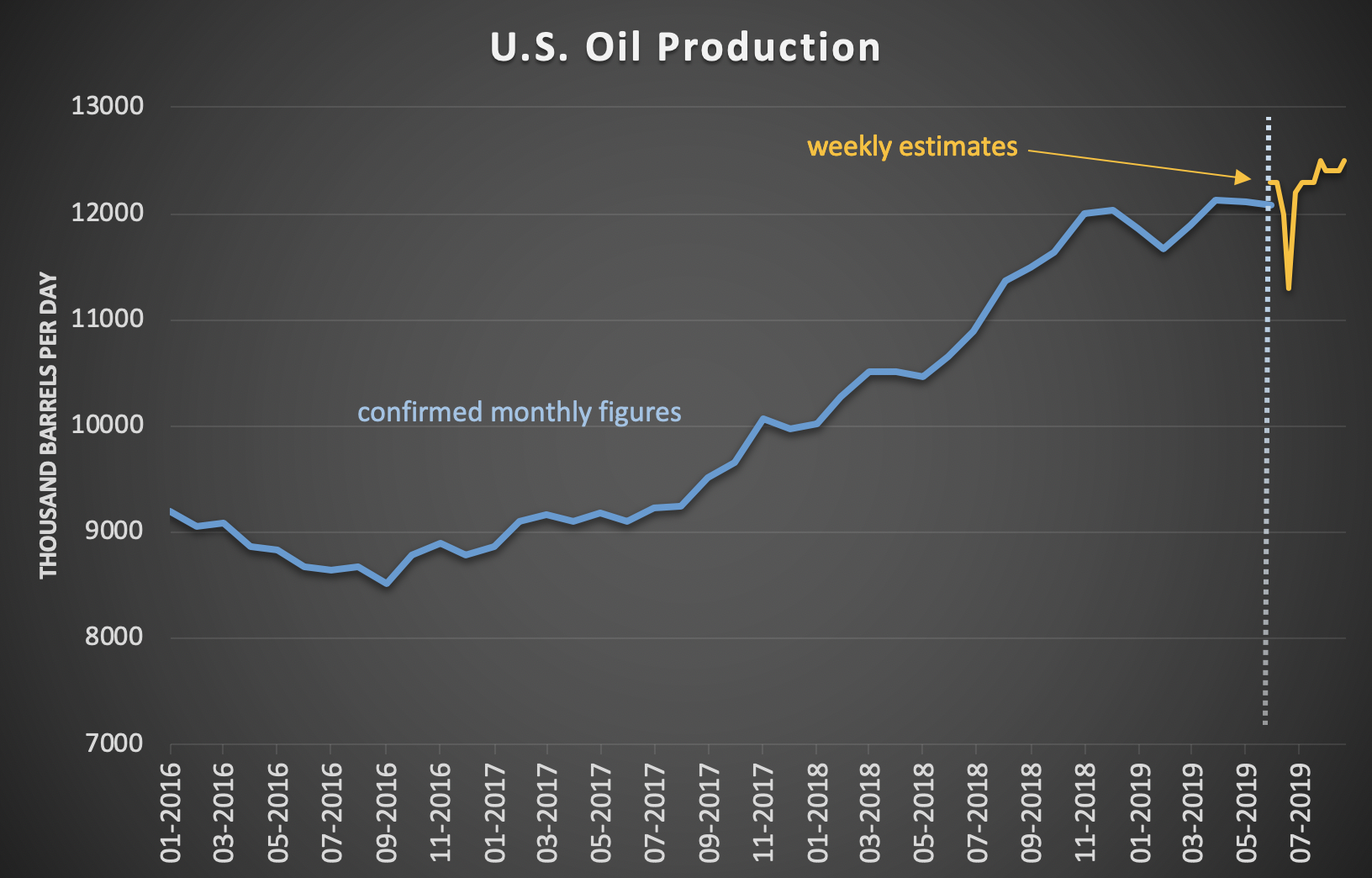 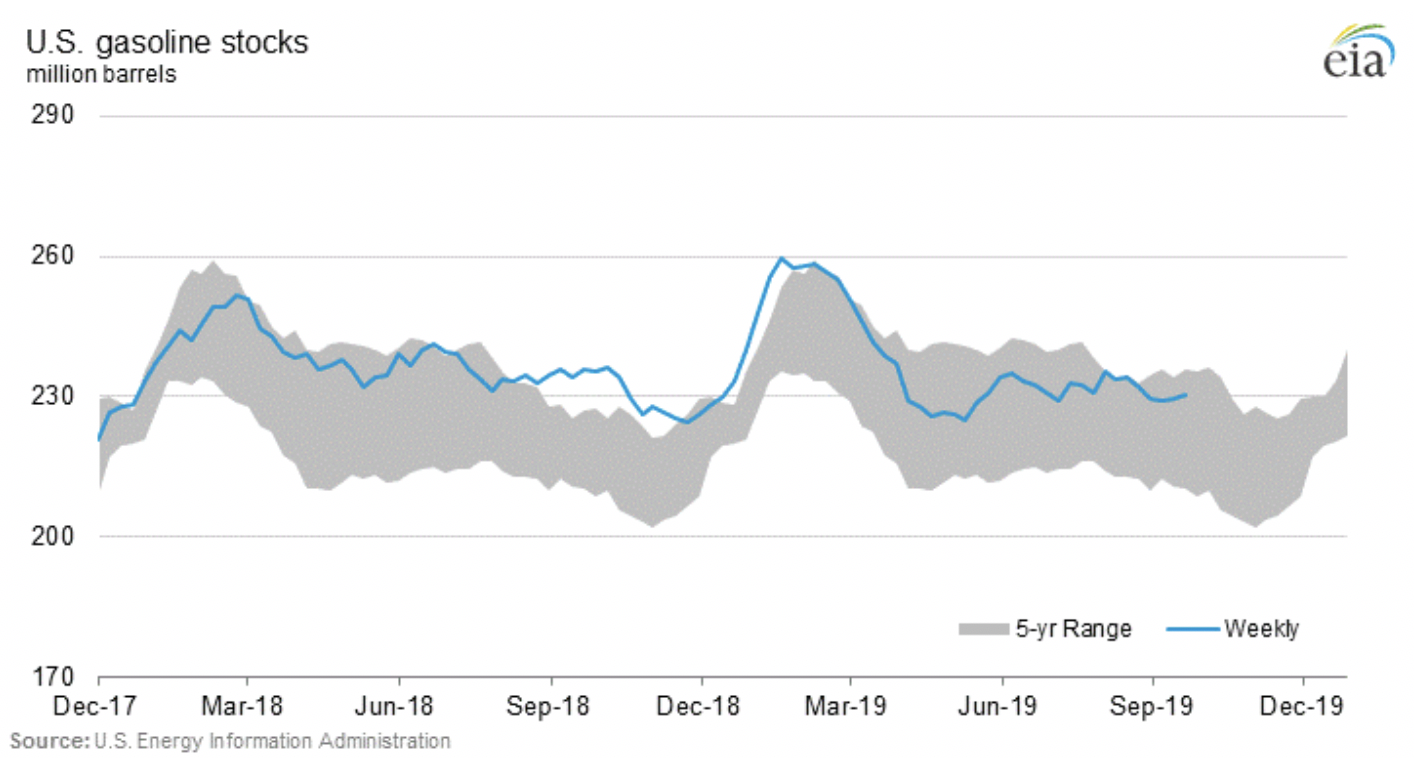 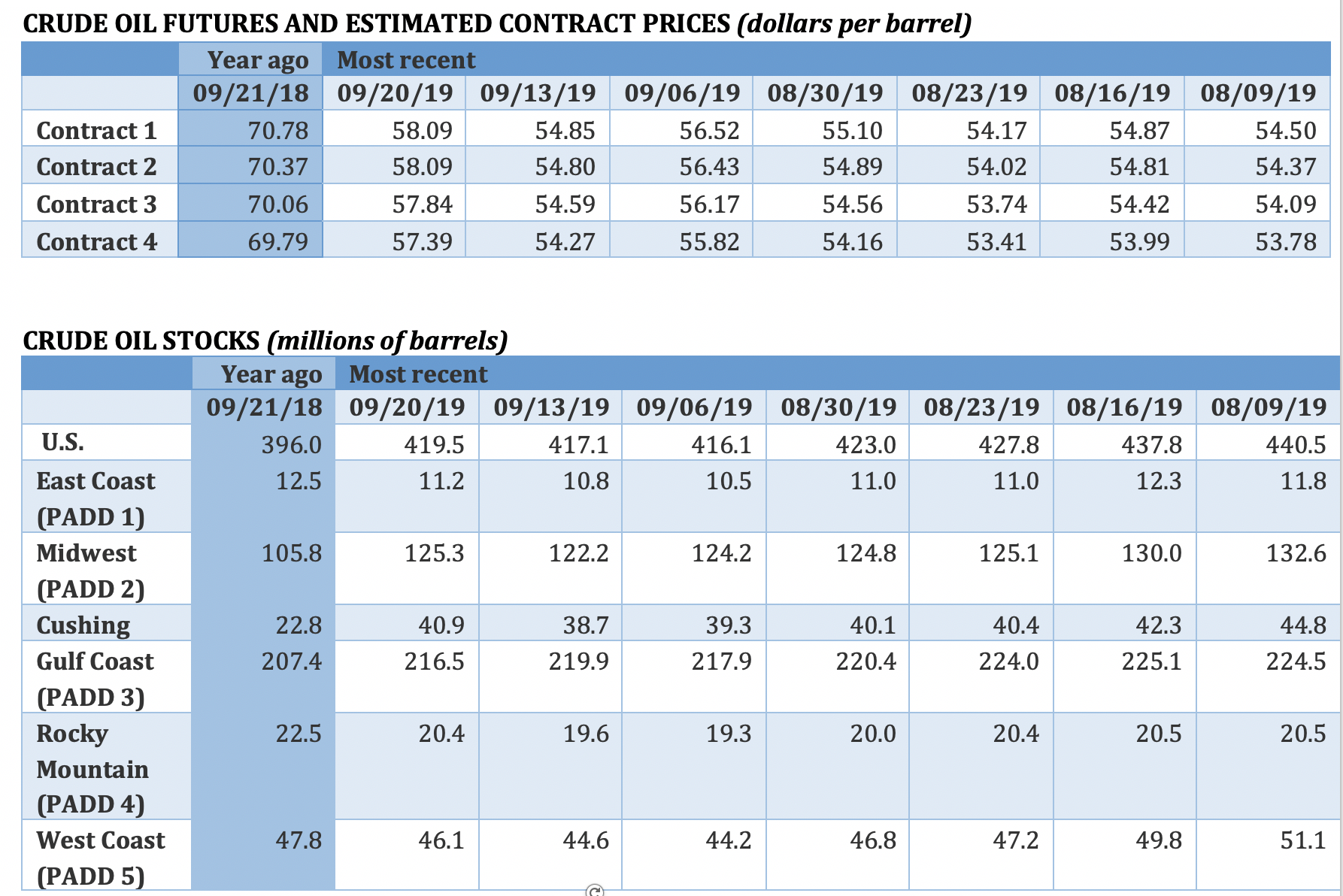 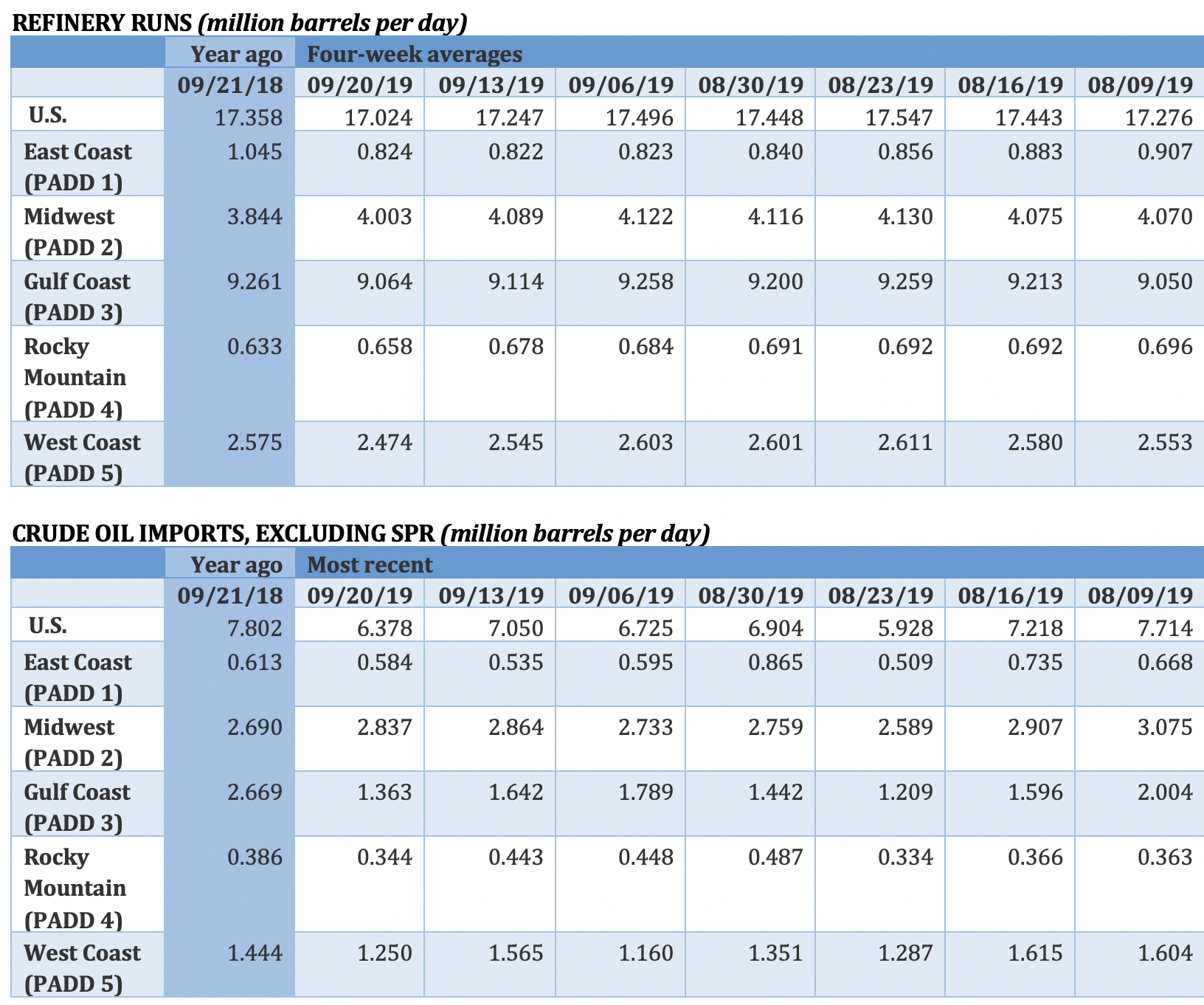 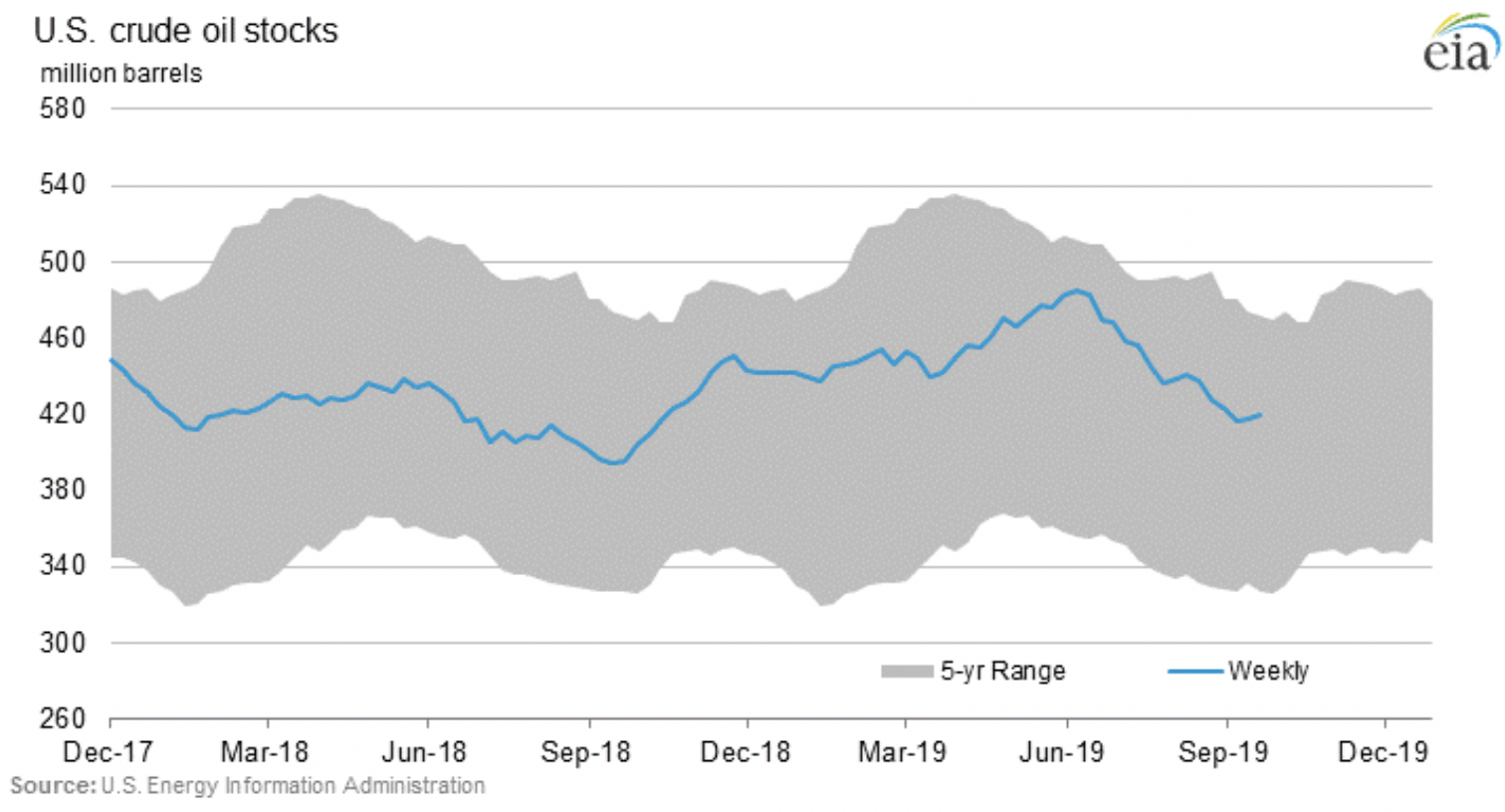 Oil is set to close out the week with the largest weekly loss in months. Crude fell on news that Saudi Arabia has declared a partial cease-fire in Yemen, raising hopes that several years of war could come to an end. It would also dial down tension with Iran.

Saudi Arabia insists on Abqaiq timeline, but analysts remain skeptical. Saudi Aramco has promised to restore production at the Abqaiq and Khurais facilities by Monday, but oil traders are not so sure. “I would like to see real evidence that they are going to resume [production] in the coming weeks,” a Middle East oil company official, told S&P Global Platts. Middle East-based petroleum engineer Einstein Millan Arcia added: “I seriously doubt Saudi Aramco’s capability to recommission such facilities [by September 30] considering the depth of the damage and all the associated testing protocol needed prior to restart.”

Aramco accelerates IPO preparations. After some reports suggested that Saudi officials were considering delaying the IPO of Aramco, it now appears that the government is pressing forward and even accelerating the effort. The offering could come as soon as November.

Saudi exports plunge. Despite assurances that there would be little interruption in exports, a report from Petro-Logistics, reported on by Reuters, estimates that Saudi oil exports averaged 5.875 mb/d in the 10 days after the Abqaiq attack, down 1.494 mb/d from prior.

Return on capital falling for oil majors. Low oil prices and a slow but unfolding energy transition is cutting into the returns for the oil industry. ExxonMobil’s (NYSE: XOM) return on invested capital (ROIC) was 25 percent in 2011, but was less than 10 percent last year, according to the Wall Street Journal. Meanwhile, the ROIC for Vestas Wind Systems (CPH: VWS) was negative 5 percent in 2011, but averaged 22 percent over the last five years.

Halcon Resources restructures $750 million in debt. Halcon Resources (OTCMKTS: HKRSQ) shed $750 million from its balance sheet in a debt restructuring. That could allow the company to exit bankruptcy in the coming weeks, the company’s second time in bankruptcy. Halcon blamed unforeseen operational issues, according to the Wall Street Journal, including poor well performance and falling oil prices.

Biofuels groups fear impeachment inquiry could delay agreement. Biofuels groups are concerned that the impeachment inquiry into President Trump could delay a pending deal on biofuels policy. The battle between ethanol and oil refineries has been fierce and ongoing, but Trump was poised to hash out an agreement that could boost biofuels demand in 2020. “It seems his interest has waned,” one industry source told Reuters. Another source said that he would not be surprised if the deal was put on hold indefinitely.

Shareholders push to breakup Marathon. Two large shareholders in Marathon Petroleum (NYSE: MPC) are calling for the removal of the company’s CEO and the breakup of the company into three parts. The push comes from Elliott Management Corp. and former board members of Andeavor, a refiner that was acquired by Marathon last year. “This experience, combined with Marathon’s stagnation and destruction of value, causes us great concern with your decision to ignore our perspectives and insights,” the group of shareholders wrote in a letter to the company.

Tesla’s stock up on delivery figures. Tesla (NASDAQ: TSLA) saw its stock price jump by more than 6 percent on Thursday after Elon Musk said that the company would deliver more than 100,000 Model 3 vehicles this quarter, a new high.

U.S. oil exports could hit 4 mb/d. U.S. oil exports could top 4 mb/d for the first time by the end of the year thanks to new Permian pipeline capacity and the outage in Saudi Arabia. The “market call on the U.S. will increase because the U.S. is effectively the marginal supplier,” Sandy Fielden, oil research director at Morningstar, told Platts.

Total to hike dividend. Total SA (NYSE: TOT) said that it would accelerate its dividend growth “in the coming years” as it looks to return more cash to shareholders. The group will increase its “dividend by 5 to 6 percent per year instead of the 3 percent per year as previously announced,” Total said.

Venezuela production falls. Venezuela’s Orinoco Belt saw production fall to 246,000 bpd on Tuesday, down from 370,000 bpd from earlier in the month, according to Platts. Lack of tankers and depleted storage has forced production curtailments.

LNG glut now, shortage later. Because of long lead times for LNG projects, there is often imbalance between supply and demand. A wave of projects came online this year, pushing prices down to decade-lows. But by 2021, very few new projects will hit the market, a legacy of the shortfall in investment from several years ago during the market downturn. That could lead to market tightness in the early- to mid-2020s. “The supply outlook is very much a feast-to-famine situation,” Nicholas Browne, Asia gas and LNG director at Wood Mackenzie, told the WSJ.

A Geopolitical Earthquake In The Middle East

This is now the ultimate game of leverage between Iran and the United States, with Saudi Arabia’s oil infrastructure being used by Tehran to win concessions from Washington.

There has been no call to war. The highest level this has reached (and keep in mind that the markets have already largely written off the incident) is for the US to announce a troop deployment to the Middle East, to defend Saudi Arabia and the UAE. That move in itself can be seen as a sign of weakness for these Gulf giants whose own alliance has been wrecked by Yemen and whose defense systems are now glaringly incapable of protecting strategic assets – even from the rogue Houthis (with, of course, Iranian aid).

Iran is now laying all of its cards on the table, offering to meet with Trump should the American president “do the right thing” and lift sanctions.

Back in Saudi Arabia, there is little time to consider the new geopolitical reality of a weakened Gulf Cooperation Council (GCC). They’re too busy wondering what this will all mean for OPEC leadership, future vulnerability of oil installations, and the Aramco IPO.

There is a certain amount of skepticism as to whether the Saudi oil leadership will be able to meet its promise of getting Abqaiq – the world’s largest oil processing facility – repaired and fully operational by the end of this month.

Recent announcements, such as a notice to Japan’s NXTG Nippon Oil & Energy (Japan’s biggest oil distributor) that exports to Tokyo would be downgraded from light grade to heavy and medium in October quite possibly suggests things are not on track to meet the completion date.

The Saudis have made a point to note that they realize they are largely alone now, with the UAE having abandoned them in Yemen, and Trump having failed to push the red button on Iran. This is a Saudi Arabia weakened to the point that it becomes clear that being the world’s oil giant is not enough.

Qatar, for one, is having a media parade in celebration of this sentiment. Having been the victim of a rather unsuccessful economic blockade by Saudi Arabia and its allies, as it turns out, natural gas giant Qatar is far better protected. Qatari-run media has also been quick to point out that Aramco employees have ostensibly been threatened with severe disciplinary actions for sharing any images or videos of Saudi oil facilities that are currently being repaired.

We are set for a dramatic geopolitical reshuffling: The Saudis are suddenly openly vulnerable, the Aramco IPO is looking far less attractive, and the US under Trump doesn’t fit the profile of a country willing to go to bat wholeheartedly for the losing side.

What does this mean for OPEC? More importantly, what does it mean for Saudi Arabia’s dominance of OPEC? That was already in question long before the attacks, when the Saudis had to bring on Russia in order to make an oil price output cut relevant. And in the event of a war with Iran, oil prices would soar through the roof and there would not be a thing OPEC could do about it (which is exactly what Iran is banking on).

For now, MBS’ attempt to save face is to make sure everyone knows that he is considering doubling the stake offering in the Aramco IPO, news of which was leaked on Tuesday via the Wall Street Journal. That would mean floating up to 10% of Aramco, rather than only 5%.