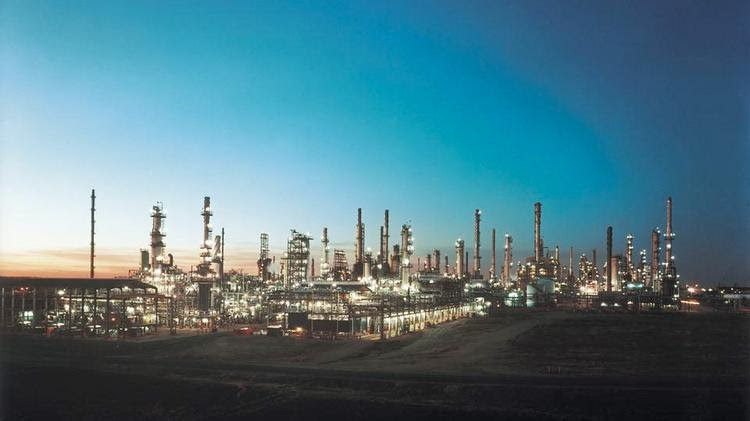 Oil Markets: Everything Is About Weak Demand

By OILPRICE.COM
Oil prices dropped sharply during trading on Thursday but recovered on hopes of more aggressive action from the Federal Reserve. The U.S. jobs report on Friday revealed more weakness, but it wasn’t as poor as feared. Geopolitical risk has receded from the top of minds of oil traders. Everything is about weak demand now.

OPEC production fell most in 16 years in September. Largely due to the Abqaiq attack, OPEC’s oil production fell sharply in September. It was the single-largest disruption in history when it occurred, although its short duration meant that the outage fell short of the PDVSA strike in 2002 in terms of total volumes lost. Still, oil prices languish as demand continues to weaken. “Oil-demand growth is hitting the skids as macroeconomic, trade, and political risk drivers continue to intensify, from Brexit to impeachment through Persian Gulf conflict risk and the U.S.-China trade war,” Bob McNally, president of Rapidan Energy Group, told Bloomberg.

Unrest in Iraq puts spotlight on oil. Iraqi security forces have tried to violently suppress widespread protests in the country, and there is little sign of a resolution. Oil production has not been affected yet.

U.S. SPR more limited than expected. The U.S. strategic petroleum reserve is thought to be a massive trove of oil that can be readily deployed. For instance, in a hypothetical outage in the Strait of Hormuz, the U.S. should be expected to withdraw 3.5 mb/d of oil from the SPR. But the reserve might not be able to pull that off. Changes in pipeline flows, and huge increases in upstream production mean that only about 1.5 mb/d can be drawn down at a time, according to Platts.

Volkswagen to spend $2.2 billion on EVs. Volkswagen’s Traton truck division plans to spend 2 billion euros ($2.2 billion) over the next five years on EVs.

Investor group urges climate action. Climate Action 100+, a group of investors overseeing $35 trillion, says that of the most polluting companies in the world, only about 9 percent have aligned their operations with the Paris Climate Agreement. The investor group has already pressured oil companies, including Royal Dutch Shell (NYSE: RDS.A) and BP (NYSE: BP) to take more aggressive action.

Exxon and Shell issue profit warnings. ExxonMobil (NYSE: XOM) and Royal Dutch Shell (NYSE: RDS.A) both issued profit warnings this week ahead of their third quarter reports later this month. Exxon said its earnings would be around 50 percent lower than the same quarter last year, largely due to lower oil prices.

Ecuador to leave OPEC. Ecuador said that it would leave OPEC in January due to fiscal problems.

Iran says French plan for talks with U.S. “broadly acceptable.” Iranian President Hassan Rouhani said that the French proposal to restart negotiations between Iran and the U.S. was “broadly acceptable.” They include Iran refraining from work on nuclear weapons and also helping to improve security for the region. In exchange, Iran would receive sanctions relief. Still, Rouhani said that mixed messages from the U.S., including President Trump saying publicly that he would escalate sanctions, undermined the possibility of talks.

Russia’s Rosneft wants payment in euros. Russia’s Rosneft is asking buyers of an oil cargo to pay in euros. “This could be a step to reduce U.S. dollar exposure, which makes sense for Russia, given the sanctions risk,” said Carsten Fritsch, an analyst at Commerzbank AG.

Chevron using joint ventures to scale up in Permian. Chevron (NYSE: CVX) is relying on joint ventures and partnerships to help scale up production in the Permian basin, according to Reuters. For instance, Chevron has a joint venture with Cimarex Energy (NYSE: XEC), which has been profitable since 2016. Chevron also has dozens of other agreements with other shale players in Texas and New Mexico. The model gives Chevron a share of the oil, but often relies on other companies to lead on drilling.

Pennsylvania joins cap-and-trade. The largest polluting state in the U.S. northeast will join RGGI, a regional cap-and-trade program with the mid-Atlantic and northeast. Entering the carbon market will put a cap on emissions from power plants, and utilities will have to buy and sell credits to comply. The measure could put more coal plants at risk. Pennsylvania regulators will have until July 2020 to draw up rules to join.

More signs of financial stress for Permian drillers. Private-equity-backed American Energy-Permian Basin LLC convinced creditors to restructure $2 billion in debt, helping the company to avoid bankruptcy. The company was founded by the late Aubrey McClendon, and the company missed an interest payment in May. Meanwhile, micro-cap driller Abraxas (NASDAQ: AXAS) said it was suspending drilling operations in the Delaware basin.

Chevron says it will cut emissions. Chevron (NYSE: CVX) said that it would cut greenhouse gas emissions by 5 to 10 percent from its upstream oil operations and by 2 to 5 percent in natural gas operations from 2016 to 2023.

Washington law impacts oil-by-rail to west coast. Phillips 66 (NYSE: PSX) has curtailed shipments of Bakken oil to its refinery in Washington State because of a law limited vapor pressure in oil-by-rail cargoes. A Phillips 66 refinery manager said that law is having a “significantly negative impact to refinery profitability.”

BP names successor to Dudley. BP (NYSE: BP) announced that Bernard Looney, head of the company’s upstream unit, will take over from Bob Dudley when he retires next year. 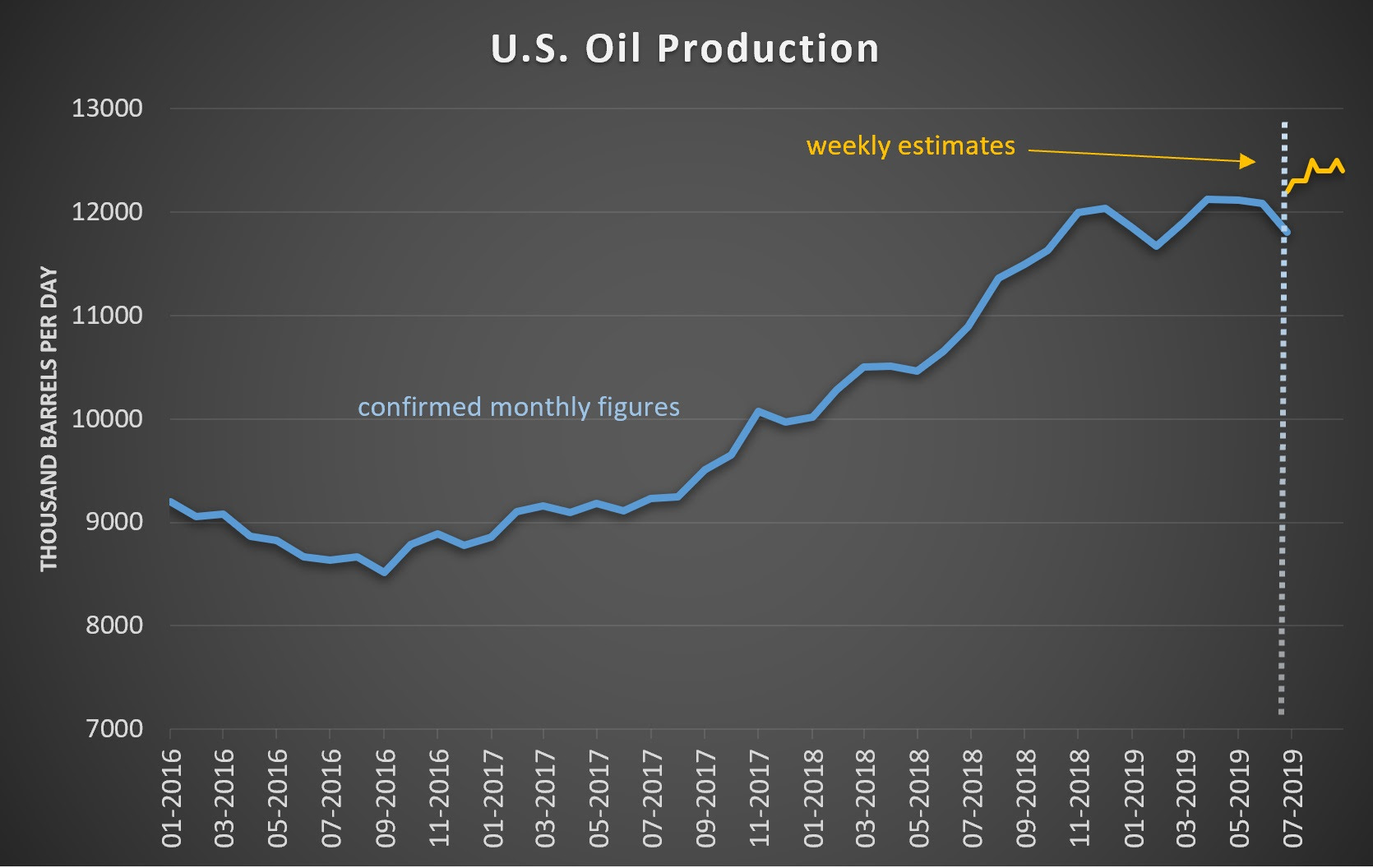 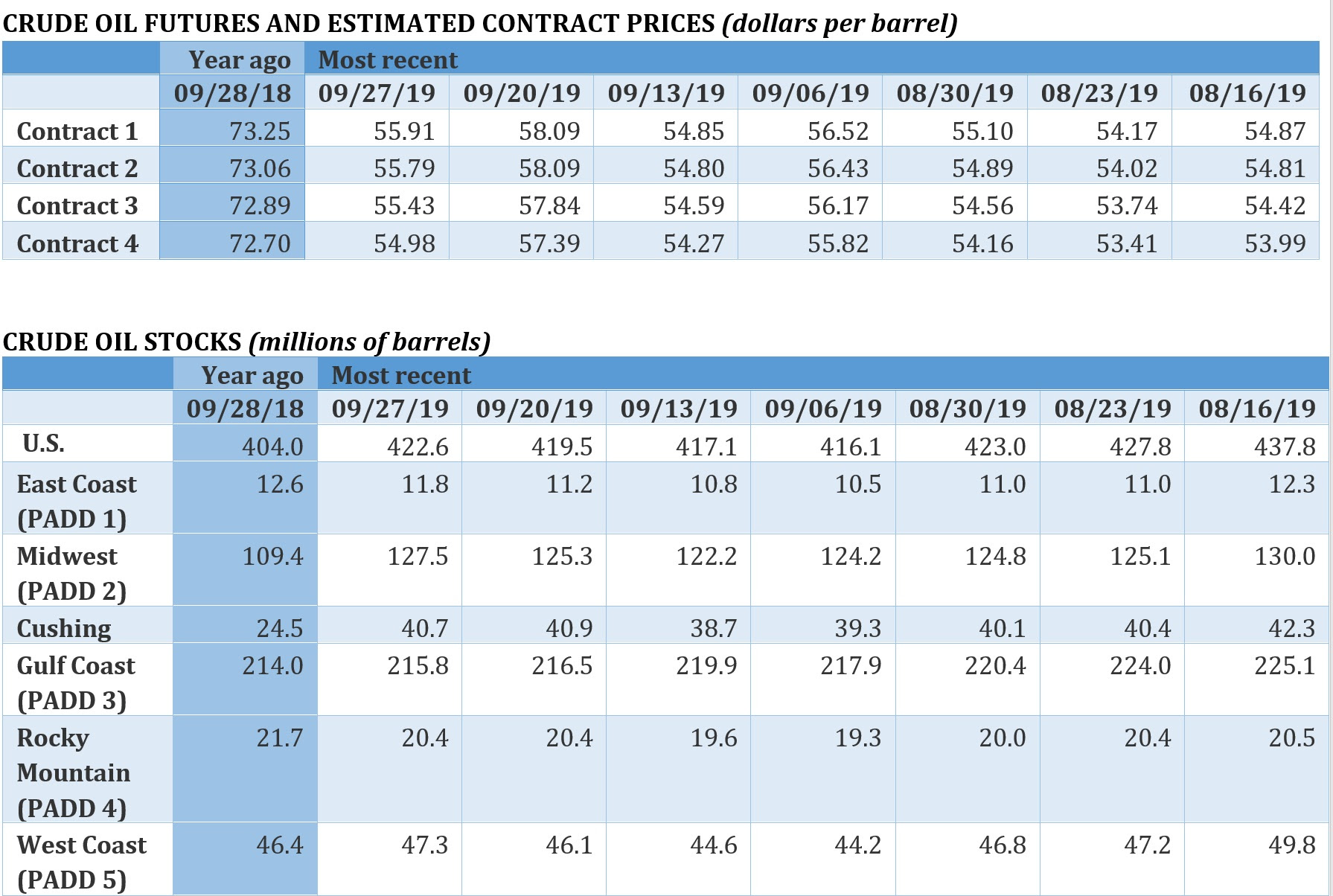 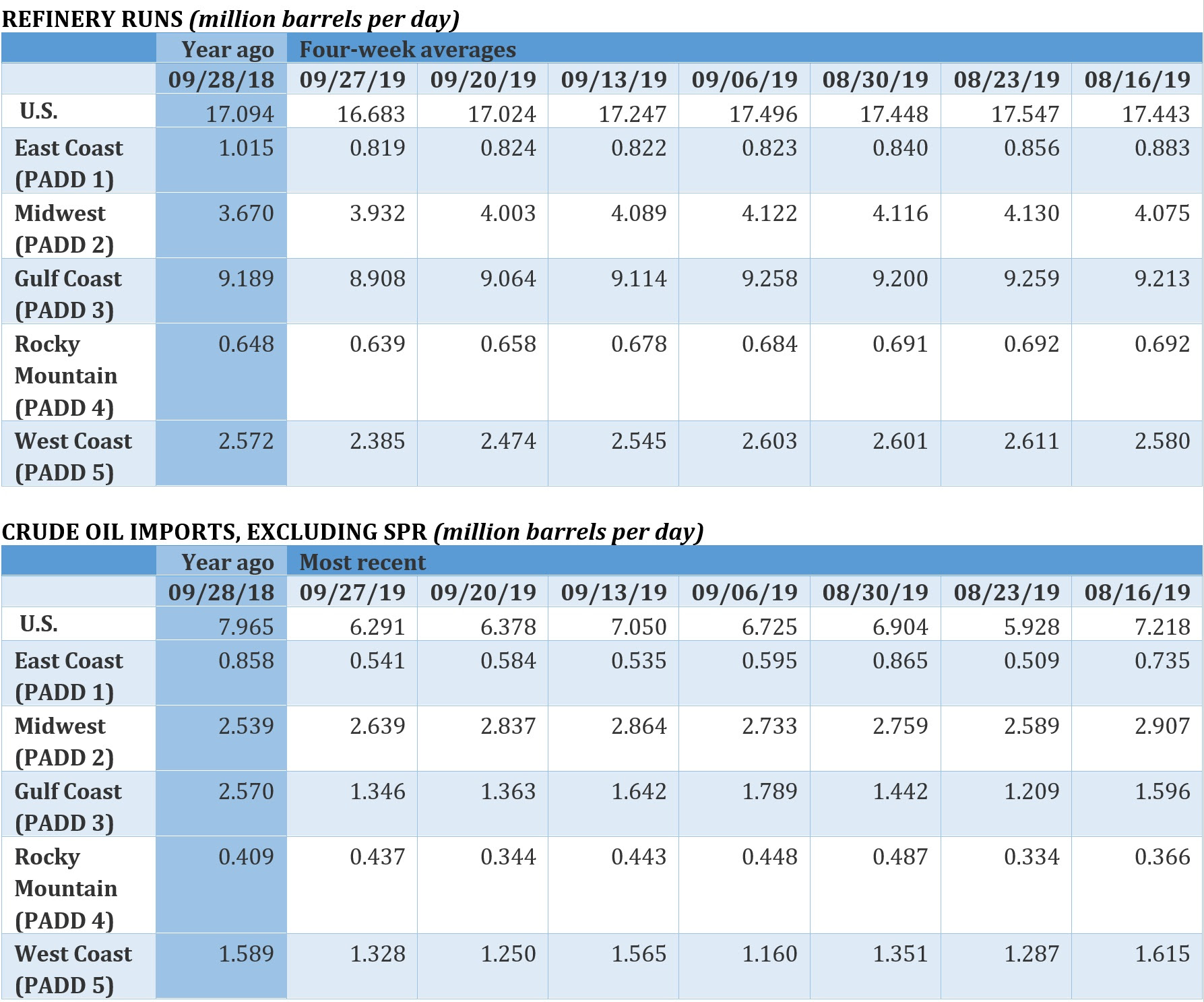 A Crisis Looms Over U.S. LNG

Trade talks between the US and China are expected to resume in October, but US LNG producers can already count the cost of earlier failed negotiations, which resulted in the imposition of 25% tariffs on their LNG exports to China. The number of US LNG cargoes heading to China so far this year has plummeted from levels in 2018.

Even for producers not facing tariffs, China’s LNG demand is not showing the dynamism of the last two years. China’s LNG boom in Winter 2017 reflected a lack of policy coordination between coal-to-gas switching on the one hand and the country’s domestic gas supply capabilities on the other. Two years later and China enters the 2019/2020 gas year better prepared.

In addition, the trade dispute has compounded the already evident slowdown in Chinese GDP growth. Chinese LNG demand is still expected to rise by more than 10% this year, but this is a far cry from the near 44% growth seen in 2017 and 39% in 2018.

Strong but not stellar demand growth now appears the order of the day. China’s LNG imports are expected to rise to 80 million tons per annum (mtpa) by 2025 up from around 54 million tons in 2018, according to forecasts made by the China National Petroleum Corporation.

Start-up at the end of the year or in early 2020 of the 38 Bcm/yr (3.7 Bcf/d, 27.8 mtpa) Power of Siberia pipeline will bring more Russian gas into China’s north, although flows will take time to ramp up and are not expected to reach full capacity until 2025.

In the meantime, Sinopec should have completed the 7.2 Bcm/yr Qingdao-Nanjing pipeline by October next year, which will take LNG from the company’s terminal in Qingdao 531 kilometres to the Nanjing gas station, passing through seven cities in Shandong and Jiangsu provinces, supporting the supply of regasified LNG into the north and east of China.

The government’s environmental policies and the build out of delivery infrastructure, including new LNG terminals, mean Chinese LNG demand is likely to remain on an upward curve in contrast to the more limited prospects for growth in Asia’s two other key markets, Japan and South Korea.

While the US-China trade war persists, this is a lost opportunity for US LNG producers in terms of immediate sales, but also in terms of a dearth of long-term purchase agreements from Chinese buyers and a lack of Chinese investment in new US LNG plant.

It also creates a particular reliance on European LNG demand, but Europe’s ability to absorb cheap LNG is not infinite. According to Gas Infrastructure Europe, Germany’s gas inventories reached 93.9% of capacity September 29. Analysts put storage levels across Europe 12 Bcm higher than a year ago at record levels.

European LNG imports have come down from the peak levels seen in April to levels on a par with last year, reflecting both the filling up of storage capacity on the one hand and a lack of further capacity to switch from coal to gas in the power sector on the other.

There are of course uncertainties. A European Court of Justice (ECJ) ruling in September has restricted Russian state gas company Gazprom’s use of the Opal pipeline in Germany. Initially, from 2011, Gazprom was only allowed to use 50% of Opal’s 36 Bcm/yr capacity, limiting its ability to bring in gas via the Nord Stream import route. This restriction was lifted in 2016, but has been re-imposed by the ECJ decision, which prevents Gazprom from the right to participate in auctions for 40% of the pipeline’s capacity.

Whether the ruling results in a real cut in supply depends on whether Ukraine and Russia reach an agreement on gas transit through Ukraine beyond the end of the year, when the current contract expires. Both have economic incentives to reach a deal and the ECJ ruling certainly puts pressure on Russia as transits through Ukraine provide an alternative route into European gas markets for the lost capacity on Opal. Nonetheless, to say Russian-Ukrainian relations are fractious and unpredictable is an understatement.

While Ukrainian-Russian gas relations provide the backdrop, more immediate is the Dutch decision also announced in September to halt production at the once giant Groningen gas field by 2022, eight years earlier than previously anticipated. The field’s production has fallen from 54 Bcm in 2013, before earth tremors were felt, to just over 16 Bcm in the current gas year, which runs to October 1.

European gas prices have strengthened on the back of the developments surrounding Groningen and Russian gas supplies, alongside Norwegian gas field maintenance, but this may only serve to price Europe’s burgeoning coal stocks back into the power market. Even as Groningen output drops to an expected 12 Bcm next year and question marks hover over the volume of Russian supplies, record high levels of gas in storage mean security of supply concerns are low.

In the event of a mild northern hemisphere winter, LNG cargoes could well end up in floating storage – i.e. loaded on LNG carriers with nowhere to go. At that point, US LNG producers really will have cause to rue the tariff barriers pricing them out of the Chinese market.