By OILPRICE.COM
– New England does not have a major gas storage facilities, and can see constrained supplies during winter. Spot natural gas prices at Algonquin Citygate spiked to nearly $80 per million British thermal units (MMBtu) on January 4, 2018.
– However, prices never topped $14/MMBtu in January and February of 2019, owing to higher levels of LNG imports.
– Pipeline capacity from the Marcellus Shale has been limited as new pipelines have had trouble obtaining buy-in from dense populations on the eastern seaboard.

• Equinor (NYSE: EQNR) shut oil and gas production at its Oseberg field last week, although the outage is only expected to be temporary.
• Shell Midstream Partners (NYSE: SHLX) soared by more than 6 percent after agreeing to acquire Shell’s 25.97 percent equity interest in Explorer Pipeline Company and 10.125 percent interest in Colonial Pipeline Company.
• Weatherford International (NYSE: WFT) said on Friday that it expects to file for Chapter 11 bankruptcy protection, due to weak drilling conditions. Its shares fell 67 percent after hours. 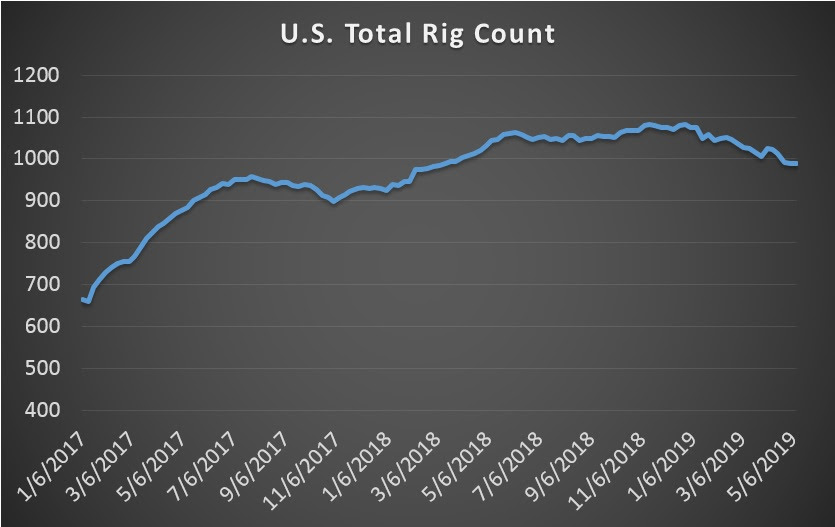 Chart of the week 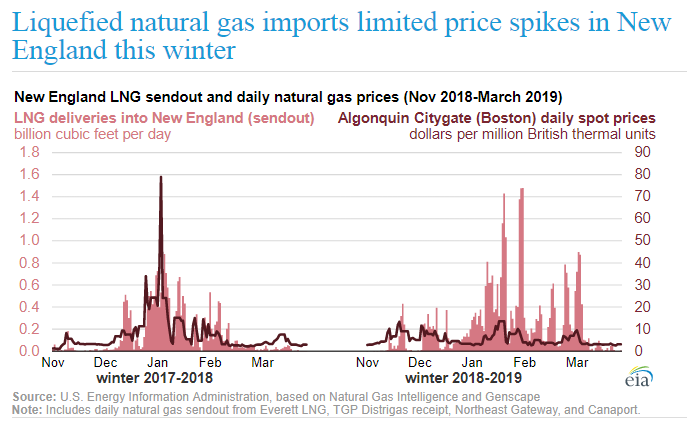 It’s been a volatile few days for oil, with prices up on Monday because of tension in the Middle East, only to fall on concerns about the trade war. By Tuesday, prices were back up again, with markets paying renewed attention to geopolitical risk.

Oil crashes on trade war. Global financial markets shrugged off the escalating trade war last week on hopes that a deal could be reached. However, by Monday, gloom began to sink in. Negotiations in Washington ended on Friday and there is little sign of a thaw in the short run. China announced retaliatory measures on Monday, raising tariffs from 10 to 25 percent on $60 billion worth of U.S. goods, which included LNG but not crude oil. If the trade war drags on, it could deter future U.S. investment in LNG export capacity. The trade war “poses a threat to U.S. investment in LNG by limiting our share in the world’s fastest-growing LNG market,” Stephen Comstock, director of the American Petroleum Institute, said in a statement.

Saudi Arabia says drones hit pipelines. In another worrying development, Saudi Arabia said on Tuesday that drones attacked two pumping stations belonging to Saudi Aramco, forcing a temporary suspension of operations. The pipeline runs from eastern oil fields to the Red Sea. Only minor damage was reported and Aramco said the outage was precautionary, but the incident could inflame tensions even more. Iran is a suspect, though neither Saudi Arabia nor the U.S. have offered any evidence.

Oil prices could soar on Middle East proxy war. A potential attack by Iranian proxy forces on U.S. interests in Iraq could set off a broader conflict, Cyril Widdershoven wrote for Oilprice.com. Disruptions in Iraq and Iran would not only impact supply, but also would wreak havoc on crude grades, with medium and heavy oil in short supply. “When the market hits the brick wall at the end of this year, this quality problem, in combination with increased instability in the Middle East, will not only create a nightmare scenario for consumers but could also push crude oil above the current $70-85 per barrel range,” Widdershoven wrote.

Iran says nuclear compliance contingent on 1.5 mb/d oil exports. Iran told European diplomats that it needs to export as much as 1.5 mb/d in order for it to stay in the 2015 nuclear deal, although this was likely a negotiating tactic. Last year, Iran had demanded 2 mb/d in a previous round of negotiations. Iran says that the European Union must provide some benefit to Iran for staying in nuclear deal after U.S. sanctions seek to eliminate all Iranian oil exports.

IEA: Fossil fuel investment stabilized last year, renewables fell. In a new report on energy investment, the IEA said that spending levels in 2018 stabilized for oil, gas and coal, but declined for renewables. Still, the agency said that the oil industry is not spending enough to ensure adequate supply in the years ahead.

Chevron quits on Anadarko, raises bar for M&A. Chevron’s (NYSE: CVX) decision to end its pursuit of Anadarko Petroleum (NYSE: APC) after Occidental (NYSE: OXY)upped its bid “raises the bar for deals, and dampened expectations that oil majors will drive a new wave of consolidation in U.S. shale,” according to Reuters. Chevron’s top management said that it would not do a deal at all costs and instead would maintain capital discipline – and its shares jumped on the news. Keeping costs in check and not overspending is “what shareholders have been advocating for,” Andrew Dittmar, an M&A analyst at researcher Drillinginfo, told Reuters. “Chevron stock got a decent pop on a lousy day for the market.”

Chevron to drill in Mexico’s Cuenca Salina Basin. Chevron will drill its first deepwater well in Mexico in 2021, in the Cuenca Salina Basin. “This ultra-deepwater region seems highly prospective. However, it has never been tested,” said Faustino Monroy, head of exploration at Mexico’s National Hydrocarbon Commission, according to S&P Global Platts.

Trump to offer more of California for drilling. The Trump administration announcedplans to open up 725,500 acres along California’s Central Coast for oil and gas drilling.

Russia losing billions on contaminated oil. Oil shipped in the western-bound 1 mb/d Druzhba pipeline from Russia has been found to be contaminated and the incident iscosting Russia roughly a half billion dollars per day.

Enbridge: Delays in Line 3 leading to higher costs. Enbridge (NYSE: ENB) said that permitting delays on its Line 3 replacement project could push costs above the estimated C$9 billion (US$6.71 billion) the company originally laid out. In March, the company pushed back its in-service date from later this year to the second half of 2020.

IMF: World spending $5.2 trillion on fossil fuel subsidies. The IMF said in a new report that the world continues to subsidize oil, natural gas and coal to the tune of $5.2 trillion (2017 figures). In other words, the fossil fuel industry receives the equivalent of 6.5 percent of global GDP in subsidization, which includes the cost of air pollution and other environmental costs.

VW to invest $1 billion in batteries. Volkswagen said it would invest 1 billion euros ($1.1 billion) into building its own batteries for its electric vehicles.

U.S. Senate drafting bill to sanction Nord Stream 2. Senators Ted Cruz (R-TX) and Jeanne Shaheen (D-NH) are drafting a bill that would target Nord Stream 2 with sanctions. Specifically, the bill would hit vessels that build the pipeline and executives from those companies.

Did you find apk for android? You can find new Free Android Games and apps.
Sharing is caring:
business, world news World News, Business Comments Off on ENERGY: Oil report for May 14, 2019 (CHARTS) Print this News

Israel floods hundreds of acres of farmlands in Gaza