MLN: If you are not familiar with the twice weekly oil reports I share, welcome to Tuesday and Friday.  The Geo-Political regional issues (wars apparent or new oil discovery or electric cars) are moving goal posts.  It will be interesting to see how new oil discoverers like Uganda fare out. 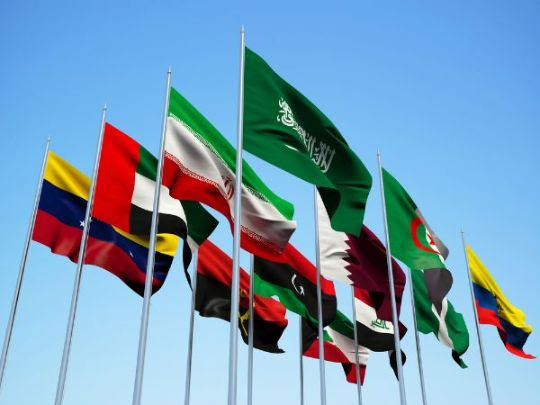 An OPEC+ Extension Is All But Certain

By OILPRICE.COM
Oil prices showed some life at the end of this week on news that Saudi Arabia was holding firm on the OPEC+ cuts. Also, there are some glimmers of hope that the Trump administration won’t move forward on its proposed trade war with Mexico.

Automakers warn Trump on emissions deregulation. The world’s largest automakers warned the Trump administration that its effort to water-down fuel economy standards for cars and trucks would create “untenable” instability in the manufacturing sector and slash profits for the automotive sector. In a letter signed by 17 car companies, including Ford (NYSE: F) and GM (NYSE: GM), they urged the administration not to move forward with a plan to roll back fuel economy standards. In particular, because California would continue to enforce its own standards, the nationwide fuel economy standards would give way to a patchwork across various states, something the auto industry desperately wants to avoid.

Saudi Arabia affirms plans to extend cuts. Saudi oil minister Khalid al-Falih said that an OPEC+ extension was all but certain. “I don’t think the question is at all whether we will extend or not,” he said at a conference in St. Petersburg. “A rollover is almost in the bag for OPEC. The question is to calibrate with non-OPEC if there needs to be an adjustment from the first half.” His comments were the strongest signal yet that the group would extend the production cuts for the rest of the year.

Putin fine with $60 oil. Russia had been itching to get out of the OPEC+ cuts a few weeks ago, but now appears willing to go along with an extension after the slide in prices. But Russian President Vladimir Putin said that oil between $60 and $65 is “quite satisfactory.”

Keystone XL construction can begin. A panel of federal judges ruled on Thursday that construction on the Keystone XL pipeline can proceed. “We are pleased with the ruling,” a spokesman from TC Energy (NYSE: TRP), formerly TransCanada, said in a statement. “We look forward to advancing the project.” The pipeline is not out of the woods yet; it still faces legal challenges elsewhere.

IEA: Natural gas demand to rise 10 percent over next 5 years. The IEA highlighted the growing importance of natural gas around the world in a new report, estimating that global demand would rise by 10 percent over the next five years. Roughly 40 percent of that would come from China.

West Virginia court hits shale drillers. A ruling from the West Virginia Supreme Court of Appeals sided with landowners in an important case over drilling. The court said that drillers cannot use their holdings on one tract of land to extract oil and gas from an adjacent tract. “Using the surface to extract minerals elsewhere, without the permission of the surface owner, is a trespass,” Supreme Court of Appeals Justice John Hutchison wrote in a Wednesday opinion. “Should the mineral owner or lessee want to utilize the surface to access minerals under neighboring land, they can certainly reach a separate agreement with the surface owner.” The landowners suedEQT (NYSE: EQT), one of the largest shale gas producers in the country, for illegally trespassing on their land.

Toyota aims for half EV sales by 2025. Toyota plans an aggressive push on electric vehicles, aiming to get half of its global sales from EVs by 2025, five years earlier than its previous target. Because of a need for more battery capacity, Toyota will partner with China’s Contemporary Amperex Technology Co Ltd (CATL) and the Chinese EV maker BYD Co for battery procurement, according to Reuters.

Colorado to establish zero-emission vehicle rule. Automakers wanted a voluntary target, but Colorado regulators are set to establish a zero-emissions vehicle (ZEV) rule, which will take effect beginning in 2022.

Gulf Coast oil imports hit 33-year low. Oil imports in March at the Gulf Coast fell to their lowest level since 1986. Imports averaged 1.8 mb/d in March, down from a peak of 6.6 mb/d in March 2007. Higher production combined with sanctions on Venezuela and a period of refinery maintenance helped trim imports.

Discounts for Permian oil. Growth in supply in the Permian is coming from lighter and lighter types of oil, creating a mismatch between supplies and refining capabilities. As a result, there is a sort of three-tiered system emerging – West Texas Intermediate (WTI), West Texas Light (WTL) and a newer so-called West Texas Condensate (WTC). But as the stream becomes lighter, discounts are becoming more pronounced.

U.S. pushing for Eastern Med gas. According to McClatchy, the U.S. government sees the promotion of natural gas production and related infrastructure in the Eastern Mediterranean as a key effort in tying countries in the region together and promoting peace. It’s a continuation of an Obama-era foreign policy objective. But the effort has also led to conflict.

Trump tariffs anger oil industry. The oil industry launched an aggressive lobbying effort in Washington to convince the Trump administration not to move forward with tariffs on Mexico. The tariffs would increase costs on the roughly 712,000 barrels of oil and products imported from Mexico each day. The danger is particularly pronounced for Gulf Coast refiners who import Mexico’s heavy Maya blend, including Royal Dutch Shell (NYSE: RDS.A), Valero Energy (NYSE: VLO) and Chevron (NYSE: CVX). 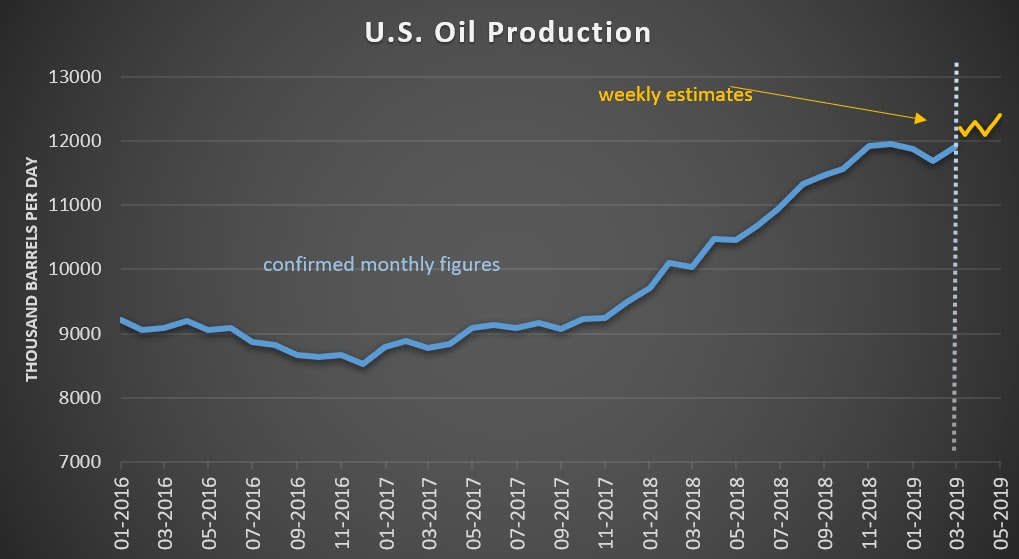 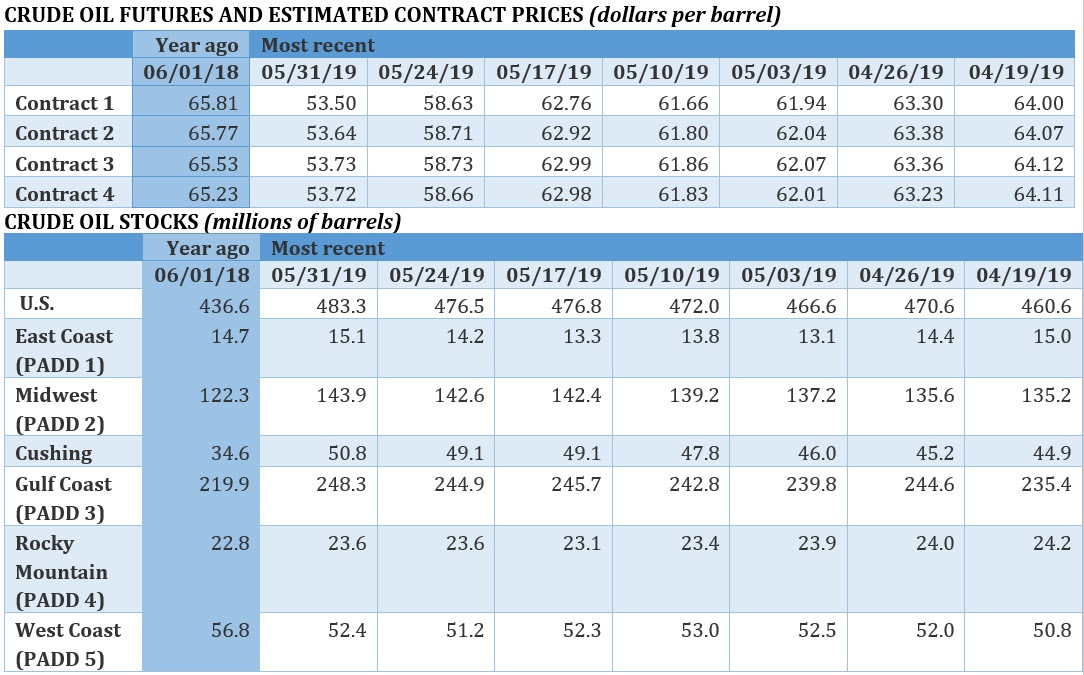 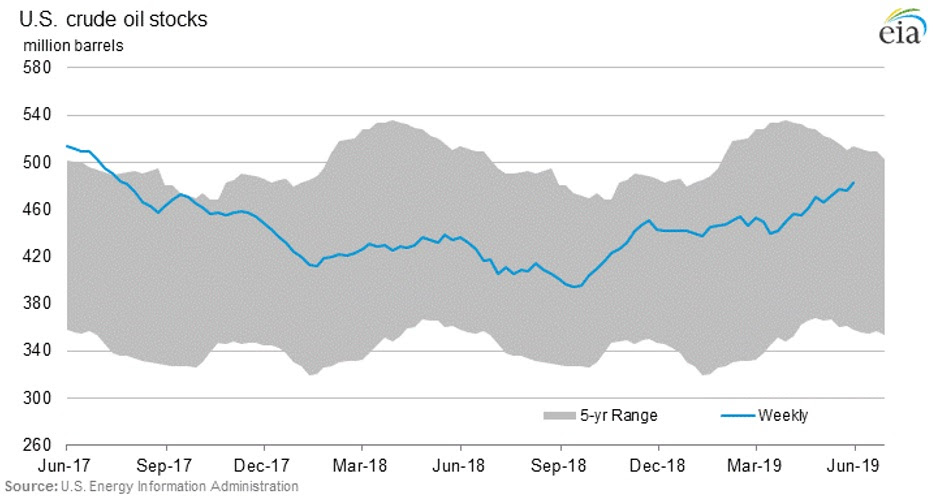 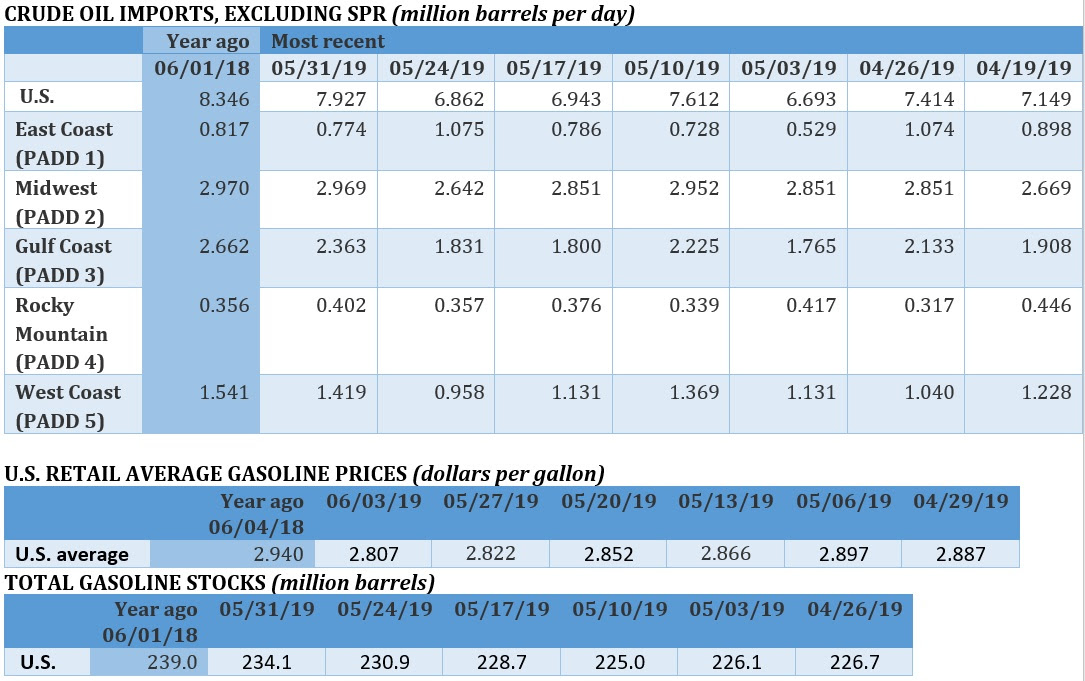 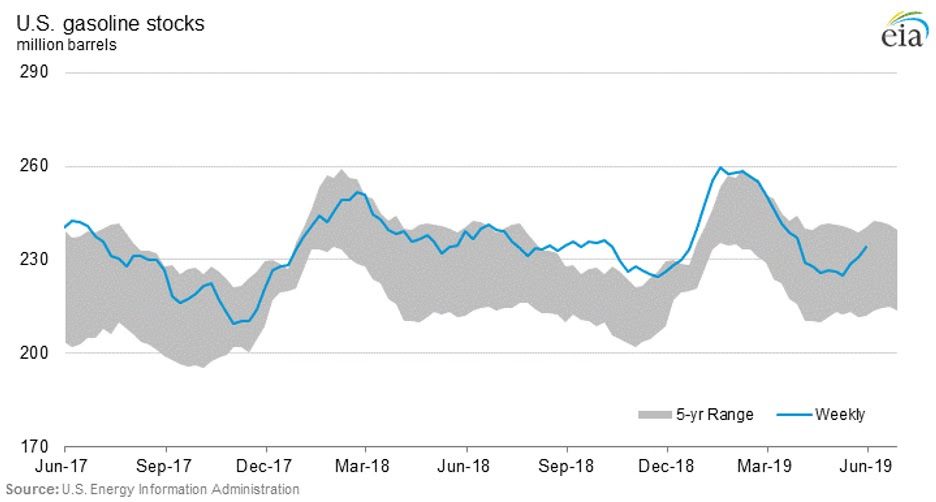 ‘No Trade Deal’ Scenario Keeps A Hard Cap On Oil Prices
Recent financial market headlines have been dominated by stories covering the plunge in global interest rates. And for good reason. Government bond yields have been sinking like a stone lead by a move in the US 10yr yield down to 2.1% for an 18-month low. Meanwhile, in overnight markets, the 3-month LIBOR has dropped from 2.8% in December to 2.5% this week. So why are investors flocking to bonds? Simple- heated rhetoric between Washington and Beijing is making a US/China trade pact seem less and less likely every day and raising concerns that elevated tariffs could trigger a global recession.

Concern that the two sides are only moving farther from a deal is justified. Rhetoric from the Trump administration is taking a hard line, no compromise attitude towards the negotiations which could be difficult to reverse. In Beijing, President Xi is now using the tougher US stance to generate nationalist support arguing the US is maligning the Chinese and threatening their sovereignty. The Chinese newspaper People’s Daily has taken an extremely aggressive path in generating support of a non-cooperative trade attitude writing “we advise the US side not to underestimate the Chinese side’s ability to safeguard its development rights and interests. Don’t say we didn’t warn you!” Chinese officials have also threatened to cut off exports of rare earth materials used by the US to make electronics, defense materials and electric vehicles. The issue here, of course, is that both sides seem to have left the negotiating table in a manner that will make it hard to return by making overtures to their supporters at home rather than to each other. While a 2019 trade pact is certainly still possible, financial markets are putting lower and lower probabilities on a deal being struck.

So why should oil traders care about the increasingly bearish macro picture? After all, we’ve had low-interest rates correspond with a wide range of oil prices in the past. In fact, we can’t find any sort of statistically meaningful relationship between interest rates and oil prices over the last ten years. Low-interest rates don’t have to mean low or high oil prices. However, we can say with a high degree of confidence in current circumstances that US/China tensions will persist as a bearish input in a market where demand growth is already seriously lacking and global crude inventories are rising. Remember that current oil supply/demand balances are bearish despite a myriad of geopolitical risks and aggressive OPEC+ supply cuts. In the face of all the bullish headlines in 2019, US crude inventories are still higher by more than 36m bbls YTD while US refiner demand is lower by more than 200k bpd y/y. At the end-user level US domestic gasoline consumption + exports are down more than 100k bpd y/y. The oil markets simply lack the fundamentals to materially strengthen without hope of a US/China trade deal. We won’t offer an opinion on when the two sides may work to cool the rhetoric and return to negotiations, but we are confident that crude prices will face serious bearish headwinds so long as they stay away from the table.

Away from the bond market, Saudi Arabia’s Energy Minister made headlines this week by strongly implying that OPEC+ will continue to cooperate on oil supply cuts in the second half of the year. We were also interested to see Boris Johnson getting traction in polls to become Britain’s next Prime Minister while US central bankers suggested that rate cuts could be on the horizon.

– Oil markets opened sharply lower then flattened out this week with Brent near $61.50 and WTI trading $53. Brent crude is now lower by $14 since late April when a US/China trade deal seemed imminent, OPEC+ was demonstrating strong cut-discipline and the Trump administration surprisingly ended the Iran crude waiver program. Since then it’s been a non-stop bearish story driven by the deterioration of US/China trade talks and chronic inventory builds in US crude supplies.

– Given that the macroeconomic scene is currently driving crude oil prices lower we thought it would be a good use of time to pay extra attention to what’s currently going on in government bond markets. As we illustrate, the US 10yr yield is in free fall moving from 3.25% last fall to 2.10% at present.

– Perhaps even more importantly, the US 2yr/10yr bond spread has completely collapsed implying bond traders expect interest rates to remain low for an extended period. This structure reveals a large amount of pessimism on the growth prospects of the global economy.

– It isn’t just bond traders who are concerned about what the US/China trade war is doing to the health of the economy. This week Australia’s central bank cut their key rate to 1.25%- representing an all-time low- as storm clouds gather over the Chinese economy. Meanwhile in the US 12-month Treasury yield sank at an incredibly fast rate moving from 2.3% to 2.1% after US Fed Chief Jerome Powell and St. Louis Fed President James Bullard gave what bond traders interpreted as dovish comments. US Fed Fund Futures now predict two US rate cuts in the second half of 2019.

– US crude production jumped higher by 100k bpd w/w to 12.3m and tied its record high mark in the process.

– US crude inventories moved lower by about 280k bbls last week to 476.5m. Overall crude stocks are higher by 9% y/y over the last four weeks.

– Inventories in the Cushing delivery hub were essentially unchanged at 49m bbls this week.

– The US currently has 28.7 days of supply of crude oil on hand versus 26.0 at the same point last year- a powerful metric in revealing how far OPEC+ has to go if they wish to tighten the market.

– US distillate stocks fell 1.6m bbls last week but are higher y/y by about 10% over the last four weeks.