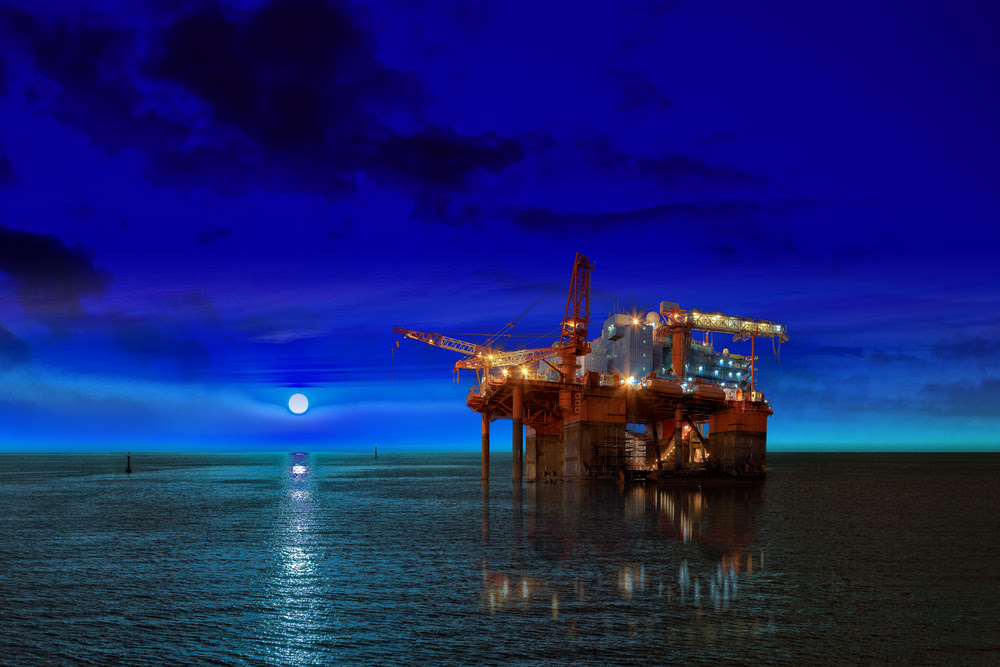 The main news today comes from the IEA, which called global oil demand “fragile” amid signs of a slowing economy. “The situation is becoming even more uncertain: the U.S.-China trade dispute remains unresolved and in September new tariffs are due to be imposed,” the Paris-based agency said in its monthly report. “The outlook is fragile with a greater likelihood of a downward revision than an upward one.” While Saudi Arabia’s promise to keep oil exports below 7 million bpd has given oil prices a boost, sentiment remains undeniably bearish.

IEA cuts oil demand growth forecast again. The IEA’s latest Oil Market Report shows some worrying numbers on oil demand. Consumption declined in May by 160,000 bpd year-on-year. Between January and May, demand was only up by 520,000 bpd, the weakest increase since 2008. Overall, the agency cut global demand growth for 2019 to 1.1 mb/d. The data offers further evidence of an economic slowdown.

New Permian pipelines bring relief. Permian oil producers could see not onlyexpanded midstream capacity, but also lower fees as new pipelines bring competition. As much as 1.6 mb/d of capacity is coming online in the next few months, with another 900,000 bpd set to be operational before the end of the year. The midstream bottleneck will quickly transform into a surplus. “There’s no way another 2.5 million bpd are waiting to get sent to Corpus Christi (Texas),” Sandy Fielden, an analyst at Morningstar, told Reuters. “Clearly, there’s going to be too much capacity … There will be buying up of barrels in Midland like it’s going out of style.”

Rystad: Oil outlook going from “gloomy to gloomier.” The potential for economic recession combined with ongoing increases in supply growth pose a rather gloomy recipe for oil prices heading into next year. Recent developments have “sent cold shivers” through the oil team at Rystad Energy, the consultancy said in a release.

UK sees GDP contraction. In the second quarter, the UK’s economy shrank for the first time since 2012. Analysts are also raising the odds of a no-deal Brexit later this year. “There is … little doubt that the economy is stalling, regardless of the volatility in the data,” PwC senior economist Mike Jakeman said.

U.S. natural gas demand at record high, but prices fall. Demand for natural gas in the U.S. continues to climb to record highs, but prices keep falling. The reason is that production continues to climb. Spot prices at the Henry Hub NG-W-HH-SNL benchmark in Louisiana were nearing a 20-year low, according to Reuters. “All the bulls are gone,” Kyle Cooper, consultant at ION Energy in Houston, told Reuters.

Argentina heads to polls. Argentina is holding an August 11 vote in the presidential primary, and due to the lack of reliable polling, the vote is viewed as a crucial barometer ahead of the general election later this year. Analysts say the reelection of President Mauricio Macri would provide certainty for the Vaca Muerta, where shale drilling is on the rise. However, analysts say that the opposition ticket, which includes former president Cristina Fernandez de Kirchner as the vice-presidential candidate, would still support Vaca Muerta development, although it would bring more uncertainty.

Nigerian oil struggling to find a home. According to Reuters, Nigeria’s light sweet oil is having trouble finding buyers, displaced by U.S. shale oil of similar quality. Rising U.S. exports have forced Nigerian oil not only out of U.S. markets, but also increasingly overseas. Reuters said that as many as forty cargoes of oil from Nigeria for August lacked buyers as late as July 18.

Hamm sees little value in public listing. Continental Resources (NYSE: CLR) CEO Harold Hamm was asked about the value of listing his company publicly. “In today’s market, we don’t see a lot of value in it,” Hamm said. The company has lost $15 billion in market capitalization since late last year.

Berkeley gas ban could spread to other cities. The city of Berkeley, CA recently banned natural gas hookups for certain types of new buildings, which could be the beginning of a broader trend. “Wow. Can you imagine if every local municipality takes up this issue? It’s death by a 1,000 cuts,” Catherine Reheis-Boyd, the president of the Western States Petroleum Association said Wednesday. Some 50 other municipalities are weighing similar measures, according to S&P Global Platts.

Texas approves flaring permit in closely-watched case. The Texas Railroad Commission approved a closely-watched permit for flaring on Tuesday, siding with drillers over the pipeline industry.

Aramco IPO could be back. Saudi Aramco is expected to hold its first-ever investor call on Monday, and there is now speculation that the company could move forward with a public offering as soon as next year. Reuters reported that there is a rather large gap between the $2 trillion valuation the company wants and the roughly $1.5 trillion that some bankers think the company is worth. 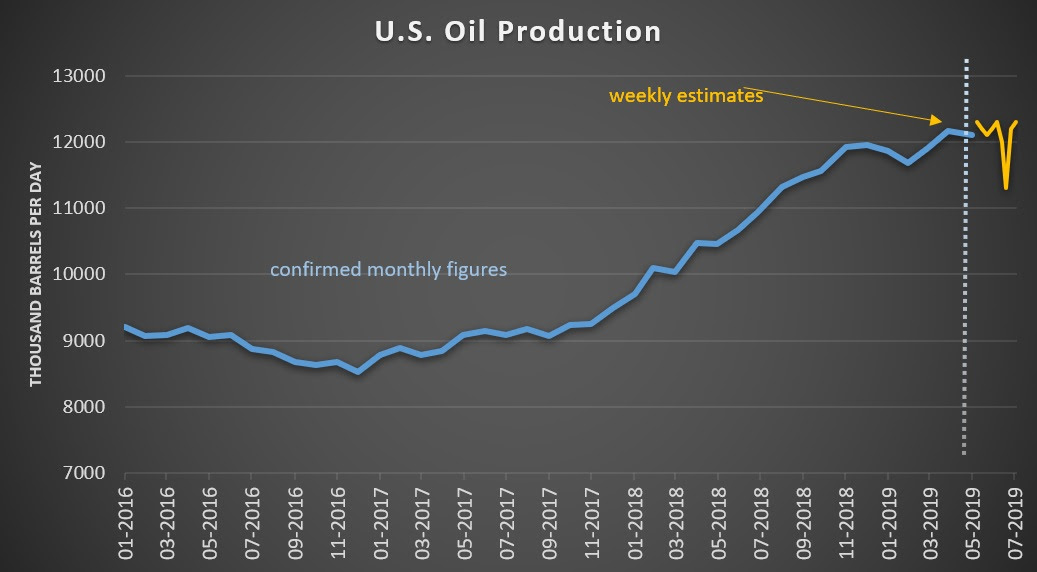 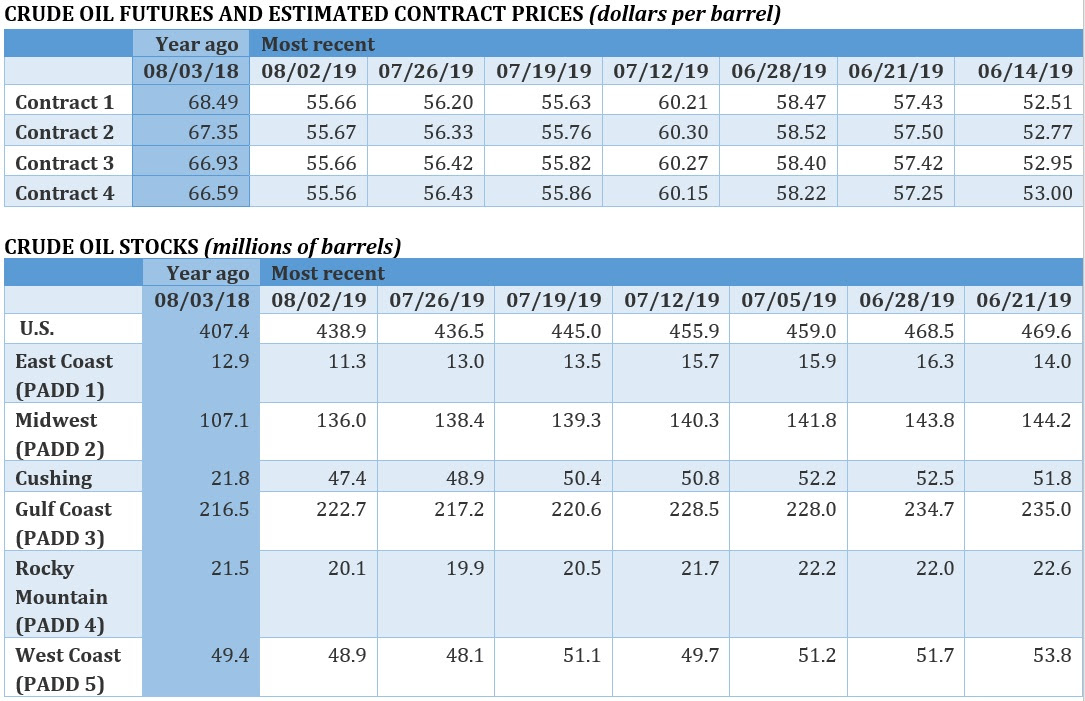 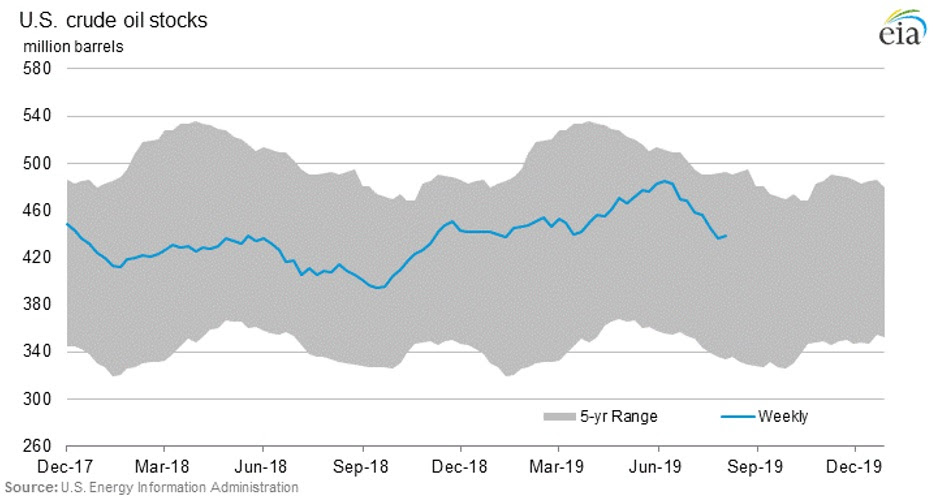 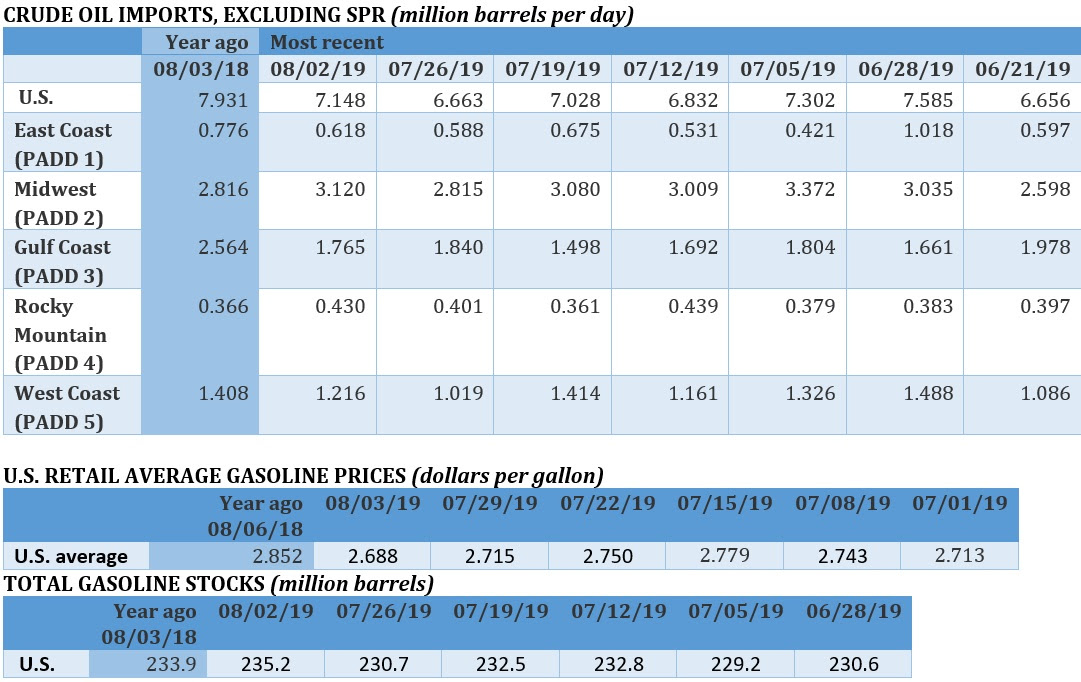 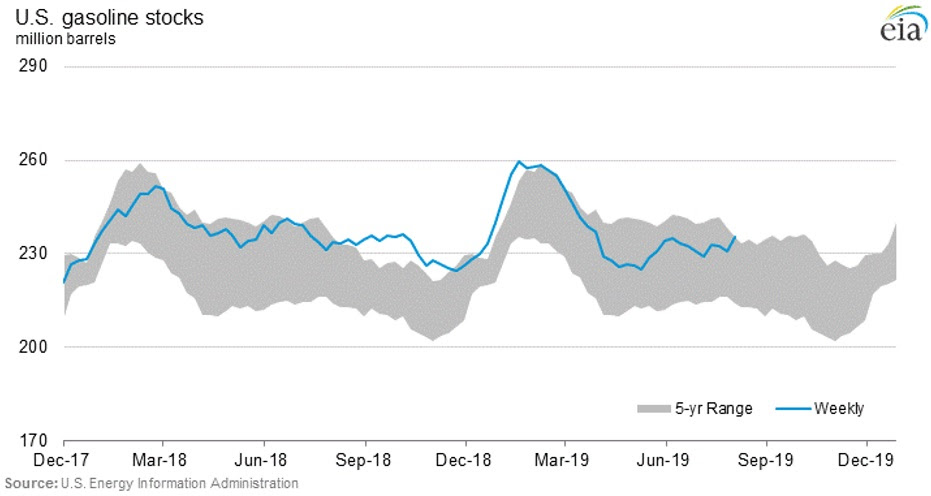 Oil Price Risk Has Shifted To The Downside

The US Federal Reserve cut interest rates July 31 for the first time since the 2008 financial crisis in an effort to keep the US’s long-running economic expansion on course.

It was in many ways an unusual move given the strong labour market, but possible in the absence of significant inflationary pressures. The US Labour Department reported inflation at 1.6% for June, while the employment rate was just 3.8%.

June data for non-defence capital goods excluding aircraft was also unexpectedly strong, rising 1.9% year on year, but the Fed’s move is nonetheless defensive, indicating concerns over the domestic US economy’s resilience in the face of a global slowdown in trade.

Real GDP growth for the second quarter was 2.1% year on year, down from 3.1% in the first quarter, according to the advance estimate published July 31 by the US Bureau of Economic Analysis. Housing starts dropped 3.9% in the first half of the year and home-related retails sales were also negative, despite otherwise robust consumer spending.

Illustrating the difference between the domestic economy and the external trade environment, government spending was up 5.0%, but exports of goods and services fell by the same amount.

The Federal Reserve did not signal that the reduction was the start of a longer-term cycle of rate cutting. However, given flat imports and an overall picture of slowing growth, the need to cut interest rates is a negative indicator when it comes to oil demand.

President Donald Trump’s decision to impose further tariffs on Chinese exports to the US is of much greater significance. Washington intends to impose 10% tariffs on the remaining $300 million of Chinese goods coming to the US from September 1. The announcement prompted a 7% drop in the price of Brent, the largest one day fall in three and a half years.

China responded within a few days with an announcement from the Ministry of Commerce that Chinese companies had stopped purchases of US agricultural products. The US then named China as a currency manipulator, owing to a weakening of the RMB/$ exchange rate, which Washington believes was the result of market intervention by the state-owned People’s Bank of China. A weaker RMB aids Chinese exporters and offsets to some extent the impact of US tariffs.

In short, the trade war truce achieved at the G20 summit in June has well and truly fallen apart. The rapid resumption of hostilities by the US indicates just how far apart the two sides are on fundamental issues.

The International Energy Agency’s assessment prior to the G20 meeting was that in a worst case scenario, global oil demand could be reduced by up to 350,000 b/d one to two years after the new measures are imposed, compared with its base case. That worst case scenario is not a foregone conclusion, but the September 1 deadline provides only a short period for some kind of breakthrough, a prospect which appears unlikely.

The slow down in world trade reduces demand for transport on land and by sea as fewer goods are moved from place to place, hitting middle distillates demand in particular. This may have the unintended effect of limiting the impact of the International Maritime Organisation’s 0.5% sulphur cap on bunker fuel that comes into effect January 1, 2019.

Back in the febrile atmosphere of the Arabian Gulf, Iran announced August 4 the seizure of a third oil products tanker. The detainment of the UK-flagged vessel Stena Impero in June came in apparent response to the UK’s detention of an Iranian crude tanker in Gibraltar, which was suspected of being on route to Syria, thereby falling foul of EU rather than US sanctions, which the EU does not support.

While the new seizure will be viewed by the shipping industry with concern, both it and the preceding seizure were of much smaller ships than the Stena Impero. The first, the MT Riah, was flying the Panamanian flag, while the latest detainee was said by Iran to be an Iraqi vessel. Both stand accused of smuggling heavily-subsidised fuel out of Iran.

As such, neither represents a serious provocation, particularly as acts of sabotage and the shooting down of drones on both sides have not resulted in a more serious escalation of what remains a tense situation.

More serious potentially is Iran’s breach of the terms of the nuclear deal from which the US withdrew last year. Although it is by no means clear that Iran wants to build a nuclear bomb, enriching uranium beyond the 3.67% limit stipulated in the Joint Comprehensive Plan of Action moves the country closer to “breakout point”, the point at which a country has enough uranium to make a single bomb.

Breaching the limit is designed to put pressure on the other signatories to the nuclear pact to find a way around US sanctions, rather than a real indication that Iran will enrich uranium to the 90% level required for weaponry, but if Iran pursues this path, the sanctions stakes become much higher.

For the moment, Iran seems willing to provoke, but not to the point of war, while the US is willing to respond commensurately. It is a dicey equilibrium, but the longer it continues, the more stable it will appear, dampening down the war risk premium in the oil price.

Meanwhile, there are signs that the ongoing Libyan conflict is beginning to impact oil production. The end of July saw force majeure declared by the country’s National Oil Corporation (NOC) at the port of Zawiya, owing to a valve closure affecting supply from the country’s largest oil field, the 300,000 b/d Sharara field, the second such incident in ten days.

Libya’s June output was 1.08 million b/d, according to secondary sources, down 40,000 b/d from May. Earlier in July, NOC reported production at its highest level in six years at 1.3 million b/d, but reports suggested it had fallen to 950,000 b/d as a result of the interruptions to supply from Sharara in early August. Libya is exempt from OPEC’s current production regime, but continued conflict and the patchwork of militia alliances on both sides leaves production vulnerable to disruption.

While geopolitical risks in both Libya and Iran should be monitored closely, it is undoubtedly the downside risks of a trade war and economic stagnation that are driving sentiment in markets.