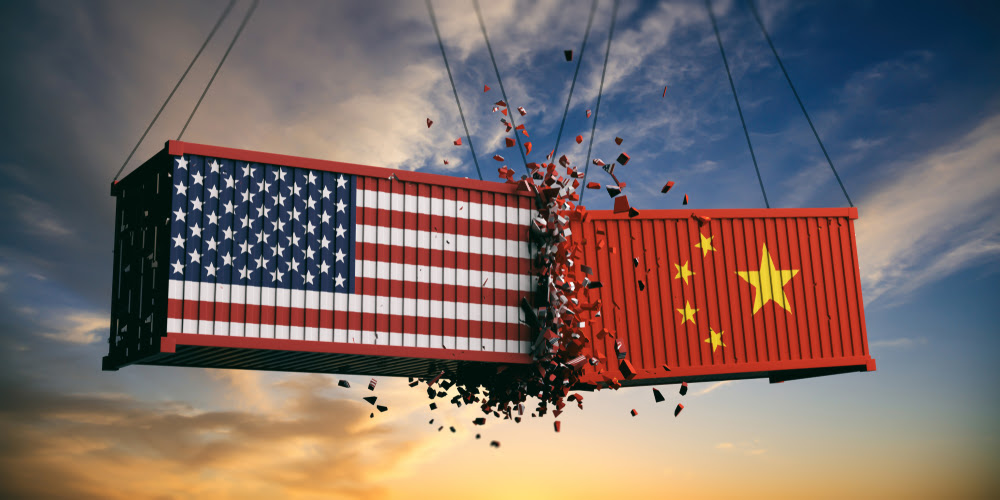 
Oil plunged on Friday after China announced new tariffs on U.S. goods, including crude oil. The move reignited fears of economic recession. Meanwhile, global financial markets are closely watching the Jackson Hole symposium, an elite financial summit that may provide some clues into the thinking of the U.S. Federal Reserve.

Alberta extends production curtailments through 2020. Alberta extended the authority of its production cuts through the end of 2020 due to pipeline uncertainty. The move comes after the delay of the Line 3 replacement, which means midstream bottlenecks are likely to persist.

Oil producers battle pipelines over tariff surcharge. Plains All American Pipeline (NYSE: PAA) has slapped a surcharge on oil producers using its new Cactus II pipeline to offset the higher costs of steel due to U.S. tariffs. But ConocoPhillips (NYSE: COP) and Encana (NYSE: ECA) have requested that U.S. regulators shoot down the pipeline fee.

China’s petrochemical expansion threatens others. A rapid increase in petrochemical production capacity in China could force producers in Japan and South Korea to cut production in the second quarter of 2020, according to Reuters. China is set to add 10 million tonnes of paraxylene capacity between March 2019 and March 2020.

U.S. says Iran exports fall below 100,000 bpd. U.S. State Department special representative for Iran, Brian Hook, said that Iran’s oil exports have plunged below 100,000 bpd, although independent assessments from S&P Global Platts puts the figure closer to 450,000 bpd. “We have effectively zeroed out Iran’s export of oil,” Hook said during a press briefing in New York. “I can’t overstate the significance of this accomplishment.” 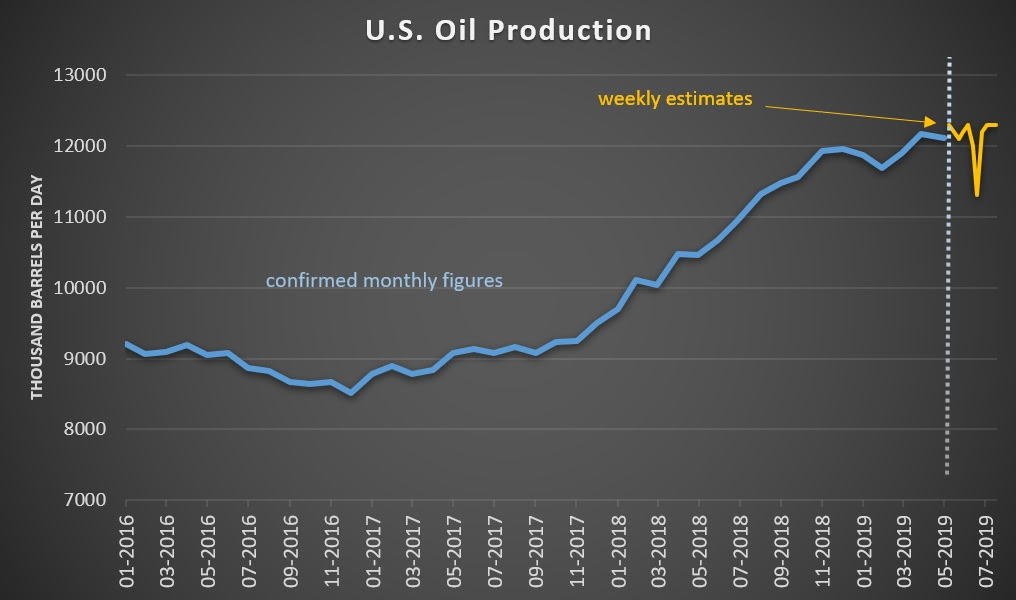 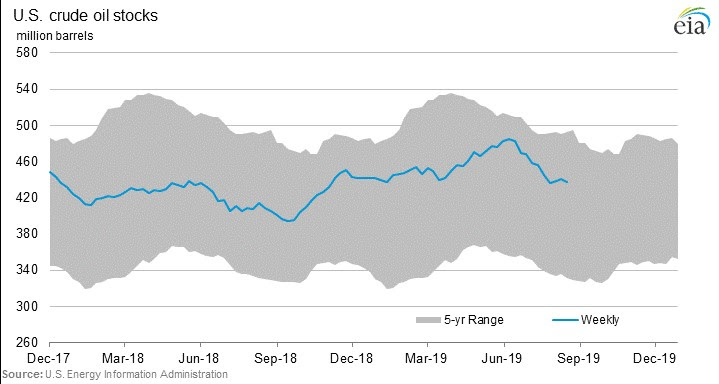 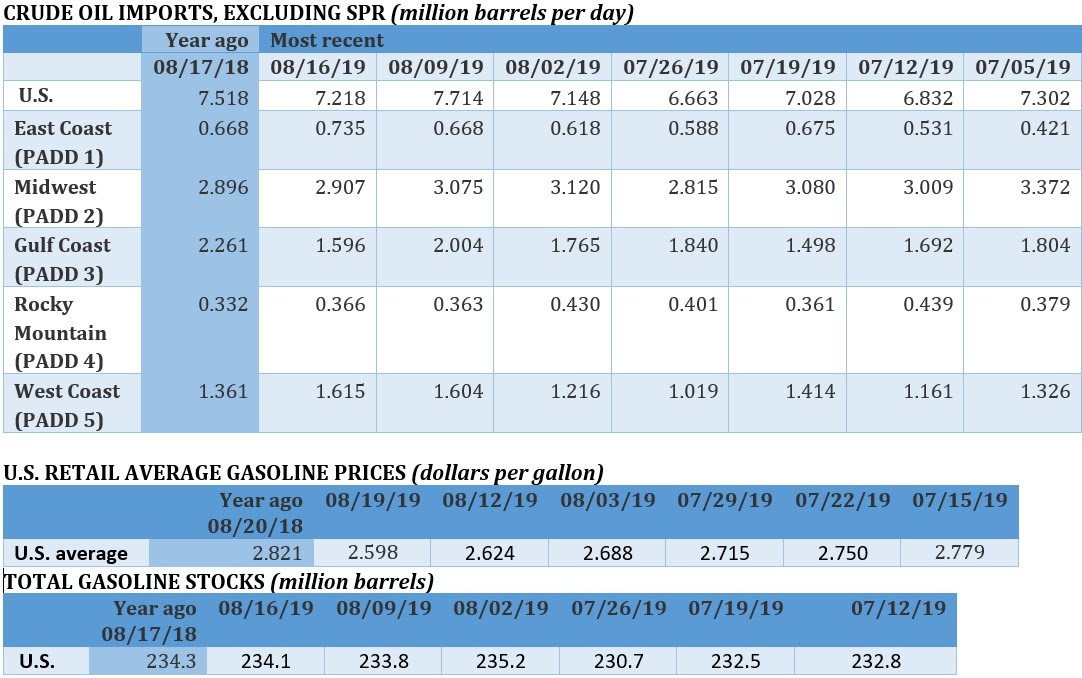 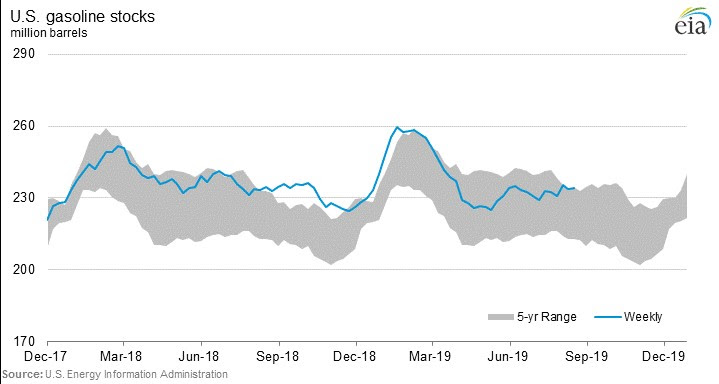 Natural gas hits 10-year low in Europe. Natural gas prices in Europe fell to a 10-year low as cheap LNG washes over the continent. Gas storage in many European countries is significantly higher than the five-year average.

Layoffs in India’s car industry. According to Reuters, declining auto sales is leading to worker layoffs and idling production in India. Auto sales have slumped for nine consecutive months in India, a sign of a worsening economy.

China unveils $75 billion in tariffs. China said that it would retaliate if the U.S. moves forward with the additional 10 percent tariff on $300 billion worth of goods, and on Friday announced plans for new tariffs on $75 billion worth of U.S. imports. The plans include an additional 5 percent on American soybeans and crude oil, which will go into effect in September, while a 25 percent tariff on cars will take effect in December.

Rosneft becomes oil trader for PDVSA. Russia’s Rosneft has become the main trader of Venezuelan oil, moving it to buyers in India and China, according to Reuters. The move comes as traditional oil traders are steering clear of Venezuela because of U.S. sanctions. Rosneft took 40 percent of PDVSA’s oil in July and 66 percent in August.

Rosneft to trade in euros. Rosneft has notified customers that future tender contracts will be conducted in euros, not dollars.

U.S. warns China away from Vietnam’s oil. The U.S. warned China on Thursday against interfering with Vietnam’s oil and gas exploration, highlighting the longstanding tension over territory in the South China Sea.

Trans Mountain pipeline restarts construction. Now under the control of a government-owned entity, construction has restarted on the Trans Mountain expansion. The pipeline is scheduled to come online in mid-2022 barring more delays.

Cube development can increase shale drilling returns. New research from Wood Mackenzie finds that cube development – drilling an entire section rather than individual wells – can increase present value (PV) by 30 percent in the Wolfcamp and Bone Spring. “Cubes won’t work for every company. That said, they offer big benefits if executed to plan,” Ryan Duman, principal analyst at WoodMac, said. But the approach also carries risk. “Investors need to be aware that the cube approach concentrates geographic and subsurface risk. And it doesn’t completely eliminate the risk of child wells,” Duman said. “Producing wells simultaneously can actually be more costly on a unit basis if the wells are not as productive as expected from overly dense spacing.”

Brazil wants to privatize Petrobras. The Brazilian government wants to fully privatizePetrobras by 2022. Meanwhile, Petrobras CEO Roberto Castello Branco suggestedthat the company should end the use of production-sharing contracts, and instead shift to a concession model.

Electric Vehicles Will Win Big In A Recession

The news on vehicle sales is indicative of the growing economic headwinds. Data published by the China Association of Automotive Manufacturers showed auto production down 12.4% in the first half of the year in what is the world’s largest car market. Chinese auto production in 2018 was down 4% to 27.8 million units, the first time since 1990 that the country’s car sales have contracted on an annual basis.

June sales for passenger cars were up, but this has been attributed to dealers offering big discounts to reduce inventories of vehicles that do not meet new exhaust emissions standards introduced from July in 17 Chinese cities and provinces.

In contrast, China’s New Energy Vehicles (NEV) faired far better. NEV sales last year were up 79% at 1.1 million NEV passenger cars plus 60,000 light commercial vehicles. According to data from EV-Volumes, this made up 4.2% of new sales in the light vehicle sector. The first half of 2019 saw total sales of 633,000 NEVs and an average market share of 6.3%.

The depressed state of the conventional auto market, but sustained buoyancy in NEV sales means the latter’s market share is higher than it otherwise might have been.

NEV sales in China for the remainder of the year are expected to fall foul of much-reduced subsidies to manufacturers, particularly for models with smaller batteries and shorter ranges. The subsidy reduction from July is also likely to have inflated first-half sales.

Nonetheless, taking the changes in support schemes into account, EV-Volumes forecasts growth of 55% over 2018 to this year for NEVs in China, representing a 6.7% share of the market. The market for conventional passenger cars is likely to see a second year of contraction.

China is and remains the epicenter of NEV production and growth, particularly when the e-bus and the e-truck market is taken into account. According to a recent report from Bloomberg New Energy Finance (BNEF), China’s e-bus fleet numbered 421,000 at the end of last year, about 98% of the world market. The global market for this segment grew by 32% in 2018, according to BNEF, which forecasts that China’s municipal e-bus fleet will rise to 600,000 by 2025.

European NEV growth at 34% last year was stunted by the introduction of the Worldwide Harmonised Light Vehicle Test Procedure (WLPT), which required many EV models to undergo battery upgrades, leading to a lack of availability.

In contrast, US EV sales rose sharply, by 79%, largely as a result of increased availability of Tesla’s new Model 3. The figures suggest that EV sales outside of China, far from suffering the downturn in the global car market, will rise quicker with increases in production capacity, supply-chain improvements and the roll-out of charging infrastructure.

Globally, EV-Volumes forecasts that the number of light plug-in EVs will rise from 5.4 million to 8.6 million this year and that medium and heavy commercial EV numbers will rise from 600,000 to 740,000. They also note continued growth in the proportion of all-electric vehicles as oppose to hybrid models.

This forecast represents about 100,000 b/d of displaced oil demand, building on the roughly 270,000 of displaced oil demand at the end of 2018. The permanent demand destruction of EVs is gathering pace at the same time that other alternative fuels, notably Compressed and Liquified Natural Gas, are starting to make inroads into the heavy-duty commercial vehicle fleet and shipping.

This estimate does not take into account the huge number of electric two and three-wheeler vehicles in Asia. Despite a clampdown on electric two-wheelers in China in 2016, their use remains ubiquitous and there are estimated to be over 200 million in the country. In April, the government introduced new national standards for electric scooters and mopeds designed to improve safety standards. Bans from some city streets reflected the congestion caused both on roads and when parked, as well as the lack of regulation of equipment standards.

Phase two of the government’s Faster Adoption and Manufacturing of Electric (and hybrid) Vehicles programme (FAME) aims to support sales of 500,000 electric three-wheelers in contrast to just 35,000 electric passenger cars. Supports for three-wheeled vehicles is aimed mainly at commercial use, while FAME II will also support sales of 7,000 e-buses.

In Bangladesh, the Power Development Board, concerned about their impact on the country’s fragile electricity system, estimated that there were more than 500,000 unregistered two and three-wheeled electric vehicles on the country’s roads in 2017.

In Indonesia, sales of passenger car EVs are also low, but electric two-wheeler sales are again more prolific in a total motorbike market of 500,000 units a year. Indonesia saw its first domestically-produced electric two-wheeler go into production this year and the Indonesian Motorcycle Association is targeting 2.1 million electric motorcycle sales by 2025.

Growing road transport demand in South Asia is a key element of global growth in transport demand because of rising incomes and the huge size of the populations concerned. Both India and Pakistan have adopted targets of 30% market shares for EVs by 2030.

The largest proportion of Asian road transport demand will almost certainly be met by conventional fuels, but if recently implemented policies designed to hit the 2030 targets are successful in terms in light EVs, e-buses and the continued growth of electric two and three-wheelers, the oil intensity of road transport growth should prove significantly lower than currently projected in most long-term energy forecasts.

In addition, the widespread use of electric two and three-wheelers mean that young Asians have a high level of familiarity with electric mobility – far higher than their western counterparts. This should serve to ease passenger car EV adoption as more models become both affordable and available.

Did you find apk for android? You can find new Free Android Games and apps.
Sharing is caring:
ENERGY, business, world news, oil and gas energy, OIL AND GAS, World News, Business Comments Off on ENERGY: Oil report for August 23, 2019 Print this News

« NTVUganda has added NTV TheBeat: One on one with Nigeria’s Nonso Amadi video (Previous News)
(Next News) How Dozens of Nigerian Scammers Stole Millions from People, Businesses »