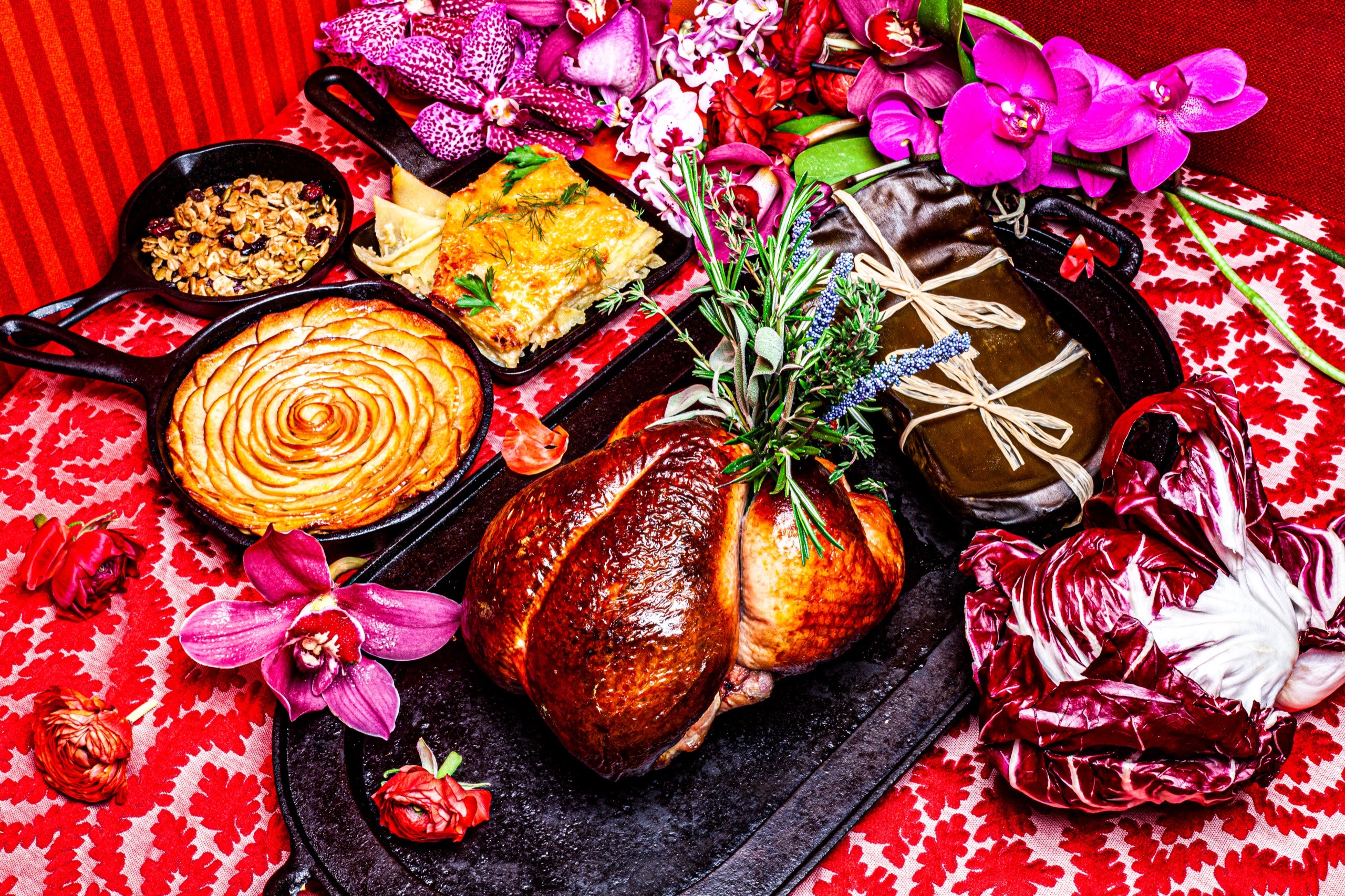 At the beginning of the pandemic, the chef Daniel Humm converted the kitchen at Eleven Madison Park into a commissary for a nonprofit organization that feeds New Yorkers in need. With no plans to reopen, he’s said that luxury will have to be redefined if he does. In the meantime, he’s offering a familiarly luxurious roast-chicken dinner to go.Photograph by Naila Ruechel for The New Yorker

In the upheaval of the pandemic, the chef Daniel Humm converted his kitchen into a commissary for an organization that feeds New Yorkers in need—and converted fine dining into takeout for the one per cent.

For years, the restaurant Eleven Madison Park set the standard for fine dining in New York City and the world, at least for a certain crowd. In 2017, it was ranked No. 1 by an opaque committee that chooses “the World’s 50 Best Restaurants.” By late 2019, the price of the tasting menu, which could take up to five hours to complete and once famously included a course of carrot tartare, fed tableside, and straight-facedly, into a meat grinder, had risen to three hundred and thirty-five dollars, before wine and other add-ons. 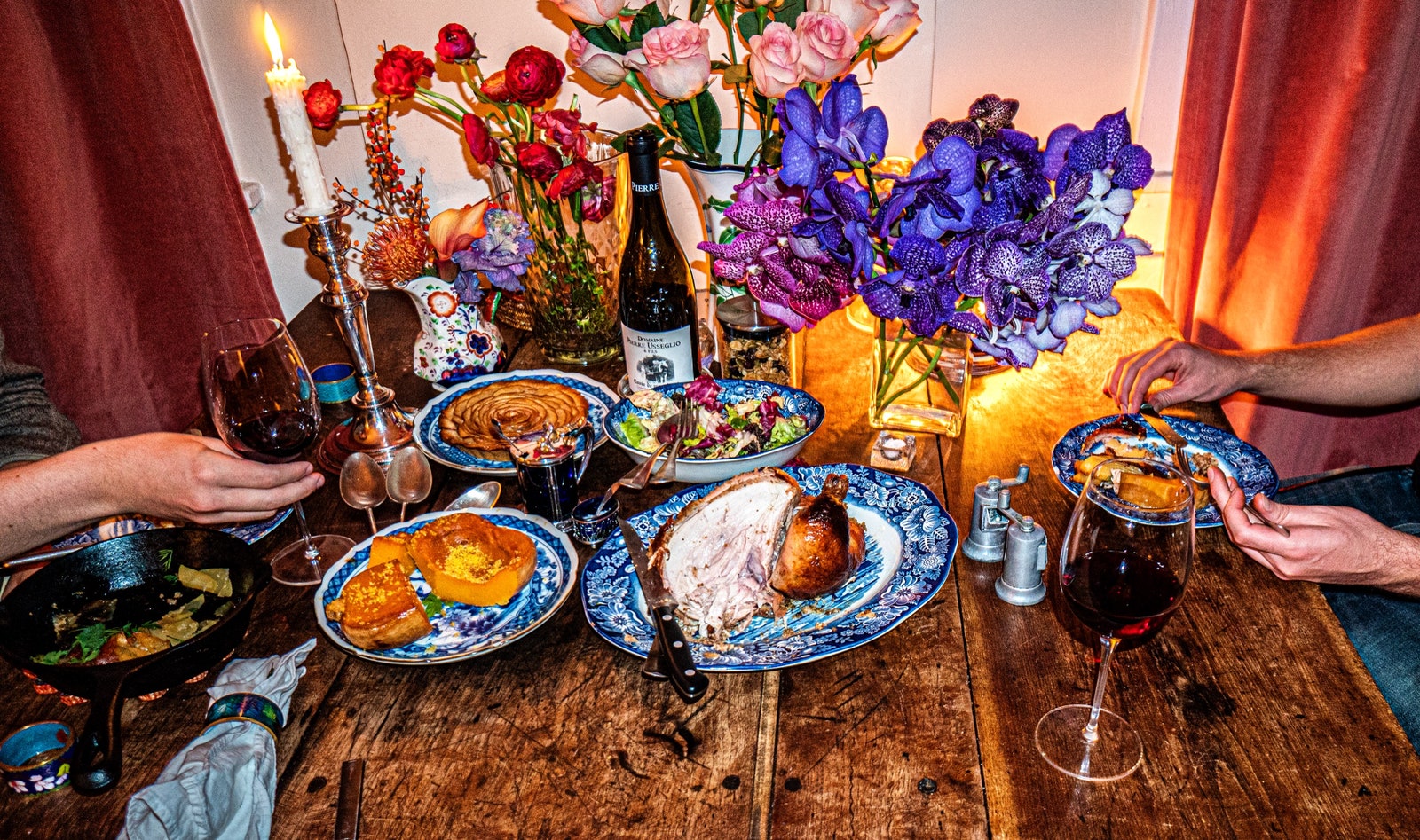 For two hundred and seventy-five dollars, the dinner includes a pre-stuffed raw chicken, half of a roasted squash, salad fixings, a potato gratin, an apple tart, and a cannister of granola. Wine is extra.Photograph by Naila Ruechel for The New Yorker

And then the ground beneath the restaurant industry fell out; not even the most venerated blocks of Madison Avenue were exempt. After the pandemic forced dining rooms to close, Daniel Humm, the chef who bought Eleven Madison Park from Danny Meyer in 2011, seemed to undergo a sort of radicalization. In an interview with Bloomberg Businessweek, in May, he described his “biggest lightbulb moment”: the decision to transform his kitchen into a commissary for a nonprofit called Rethink Food, which provides free meals for New Yorkers. “The infrastructure to end hunger needs to come out of the restaurants,” he said. “I don’t need to only feed the 1% anymore.”

For a while, it seemed like he might not feed the one per cent at all. The restaurant has never offered outdoor dining, and Humm has so far elected not to operate indoors at twenty-five-per-cent capacity. A hypothetical reopening is “a blank canvas right now,” he told Bloomberg Businessweek. “We would need to redefine what luxury means.” But, before the wealthiest New Yorkers could go into champagne-and-caviar withdrawal, Humm launched EMP To Go, offering a roast-chicken dinner—plus a turkey iteration for Thanksgiving, Krug Grande Cuvée and white-sturgeon roe optional—for pickup in not only Manhattan and Brooklyn but also the notorious one-per-cent strongholds of East Hampton; Greenwich, Connecticut; and Montclair, New Jersey. 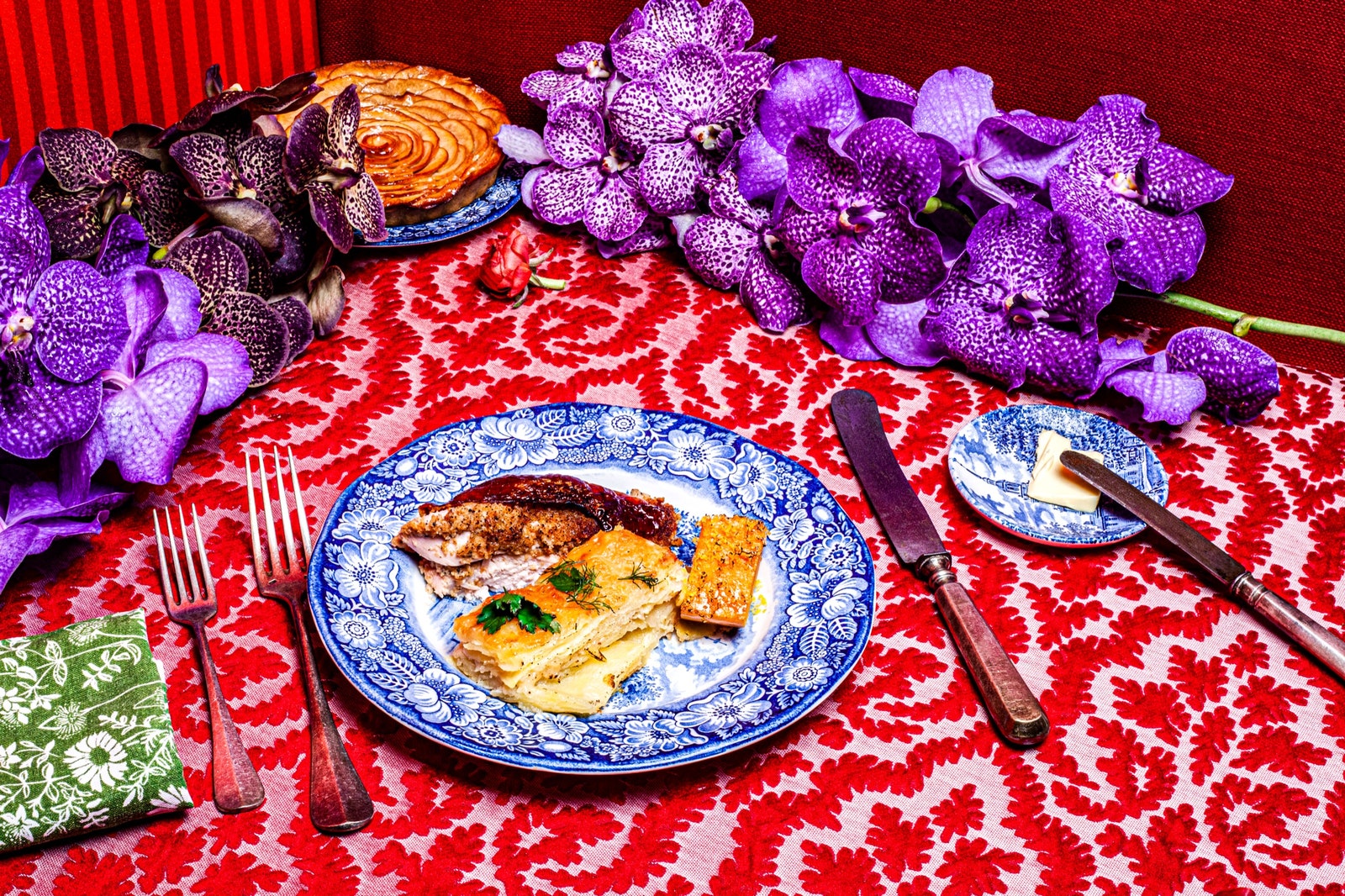 The meal is designed to serve as many as four people, and can be picked up from Manhattan, Brooklyn, Long Island, New Jersey, or Connecticut.Photograph by Naila Ruechel for The New Yorker

Is EMP To Go the world’s best takeout? On a recent rainy Sunday, I arrived at Grand Army Plaza, in Brooklyn, on the lookout for a dark-gray BMW X7 parked in the roundabout’s inner ring, as per e-mailed instructions. At the car, a man scanned a clipboard for my name and then handed me an expensive-looking blue-canvas insulated bag embossed with the restaurant’s abstractly floral logo, for which I had paid two hundred and seventy-five dollars. My feeling of furtive anointment was replaced quickly by a flush of embarrassment; putting aside questions of morality, fine dining is decidedly uncool.

Back home, I unpacked the free-range, certified humanely raised chicken, raw but ready to be roasted, pre-stuffed with brioche, foie gras, and truffle. A box of bitter greens came with tiny jars: vinaigrette and sunflower-seed crumble. There was half of a baked butternut squash, sheathed in waxy seaweed, with a miso-cured egg yolk to grate on top of it, plus a par-baked potato gratin, an apple tart, and a cannister of the restaurant’s status-symbol granola. “Truffle and eggs,” a two-hundred-dollar add-on I’d assumed was coyly named, turned out to be plainly literal: six raw eggs and a pair of dark, mottled knobs that smelled vaguely astringent, along with directions for how to master a French omelette. 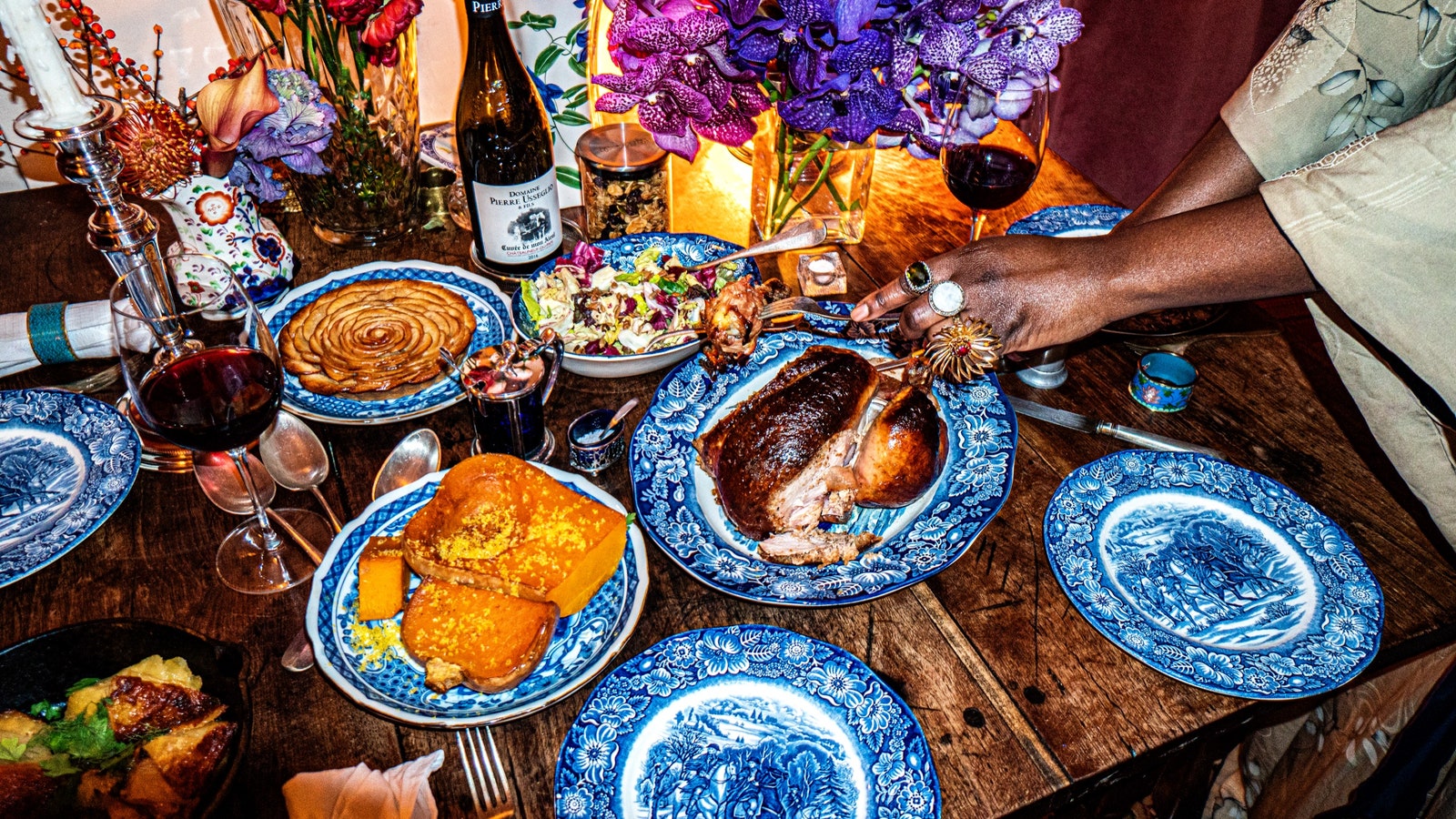 The butternut squash comes with a miso-cured egg yolk and a small zester for shaving it on top. Instructions for cooking the chicken include frosting the skin with butter before roasting it.Photograph by Naila Ruechel for The New Yorker

The chicken was the most decadent I’d ever cooked, not to mention the most beautifully bronzed. (The secret, I think, was frosting the skin, like a cake, with softened butter.) The squash yielded easily to a spoon after I warmed it through, brown butter pooling in its cavity, and the rich, velvety gratin was stretchy with Gruyère and sharp with Parmesan. But my prevailing emotion was discomfort, when the plates had been cleared—and not because I had to wash them myself. If Humm’s pivot to philanthropy felt like a silver lining of the pandemic, a long-overdue reckoning with a system that favors few, EMP To Go seemed to undercut it, luxury adapted but far from redefined. Shaved clumsily over my omelette, the truffles were only as remarkable as nuts, and, paradoxically, less valuable for their scarcity. (Roast-chicken dinner $275.) ♦

Published in the print edition of the November 23, 2020, issue, with the headline “EMP To Go.”
Hannah Goldfield is The New Yorker’s food critic.

A New Kind of Hot Chicken, from Pecking House