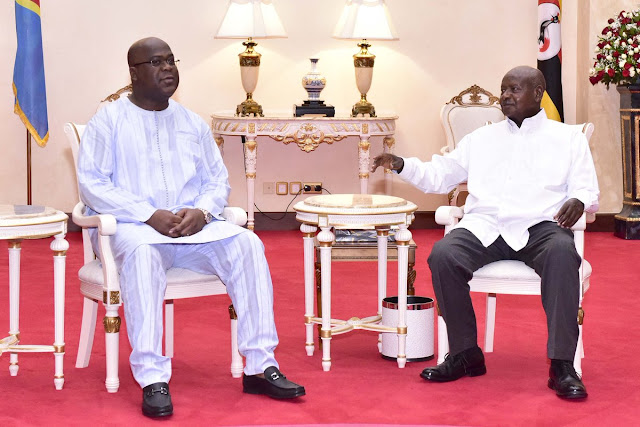 Kampala- President Museveni last October met with Felix Tshisekedi, the president-elect of Democratic Republic of Congo (DRC), a tell tale sign of the already established working relationship between Kampala and the government-in-waiting in Kinshasa.

Diplomatic and security sources intimated to Daily Monitor that President Museveni briefed Mr Tshisekedi on Uganda’s interests in DR Congo, particularly flashing out the Islamist ADF militias known to be hiding in the eastern Congo jungles.

The eastern DR Congo is a sanctuary for a plethora of rebel and militia groups that menace both the civilian populations inside and neighbouring countries.

Mr Tshisekedi, leader of Union for Democracy and Social Progress (UDPS) party, the main opposition party, was yesterday declared surprise winner of the presidential elections with 38 per cent or more than seven million votes against the more than six million votes garnered by Engagement for Citizenship and Development party’s Martin Fayulu who came in the second place while Mr Emmanuel Ramazani Shadary, backed by President Joseph Kabila, came in third place with more than four million votes.

These elections were seen by many as a hypothesis that the DRC had a first transition of peaceful power since its independence in 1960.

Mr Tshisekedi, 56, will replace President Kabila, who has ruled the country for 18 years. Sources added that during the October 8 meeting at State House Entebbe, President Museveni told Mr Tshisekedi that he was interested in seeing a peaceful transfer of power in DRC, which he said would bring stability to the region and economic development of Africans. From Kampala Mr Tshisekedi flew to Belgium and later the United States.

Mr Don Wanyama, the President’s spokesperson, yesterday said he was not aware of the meeting.

Mr Tshisekedi was accompanied to State House by officials of his UDPS party.
He is the son of long-time opposition leader, Étienne Tshisekedi, who died in February 2017.

The Museveni-Tshisekedi meeting coincided with the 9th high level meeting of the regional oversight of the peace, security and cooperative framework on DRC and the region, convened by President Museveni at Commonwealth Resort Munyonyo.
The summit attended by Zambian President Edgar Lungu and South Sudan President Salva Kirr ran from October 8 to 10.
President Museveni was elected chairman of the Regional Oversight Mechanism on the DR Congo and the region under auspices of the International Conference on the Great Lakes Region, a 12 member country body of countries of the Great Lakes region.

Kampala pleased
Uganda and DR Congo have over the last decades enjoyed stable relations, albeit complicated by security tensions in the eastern Congo.

Diplomatic and security sources indicated that while in principle “there is nothing wrong” with a presidential aspirant in one country meeting with a sitting president of another country, in this case Kampala is happy about Mr Tshisekedi’s win since he is the only candidate who contacted them to understand Uganda’s interests in DRC

Sources further intimated that during the roughly one hour meeting, Mr Tshisekedi promised President Museveni to help Uganda to flash out the ADF rebels once he is elected into power.

A fortnight after the Kampala meeting, Foreign Affairs minister Sam Kutesa accompanied by Uganda’s ambassador in Kinshasa James Kinobe delivered a special message from President Museveni to DR Congo’s outgoing President Kabila. Details of the meeting were not readily available.

State minister for International Relations Okello Oryem yesterday described the timing as “still premature” to comment on Tshisekedi’s win nor the polls.
Mr Fayulu, however, denounced the results as “an electoral coup,” as reported by Radio France International.

The results can still be challenged before the Constitutional Court, which now has 14 days to validate the vote.