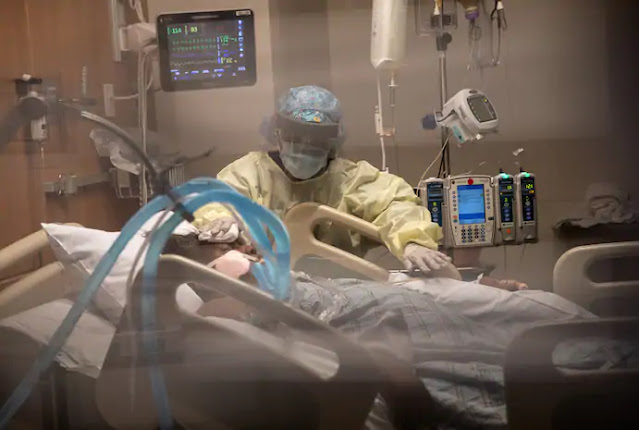 By THE WASHINGTON POST
Oct. 20, 2020 at 2:00
The covid-19 pandemic has left about 285,000 more people dead in the United States than would be expected in a typical year, two-thirds of them from the disease itself and the rest from other causes, the Centers for Disease Control and Prevention reported Tuesday.

The CDC said the coronavirus, which causes covid-19, has taken a disproportionate toll on Latinos and Blacks, as previous analyses have noted. But the CDC also found, surprisingly, that it has struck 25- to 44-year-olds very hard: Their “excess death” rate is up 26.5 percent over previous years, the largest change for any age group.

It is not clear whether that spike is caused by the well-recognized shift in covid-19 deaths toward younger people between May and August, or deaths from other causes, the CDC said.

The report comes with just two weeks left in a presidential campaign whose central issue is President Trump’s handling of the pandemic. Trump has sought at every turn, including in remarks Monday, to minimize the virus’s impact, despite a covid-19 death toll that is likely to be the third-leading cause of mortality in the United States this year, behind heart disease and cancer. That stance has proven to be the president’s enduring weakness as the election looms Nov. 3.

His Democratic opponent, Joe Biden, has made his plans to tackle the pandemic the major focus of his bid to capture the White House.

“The number of people dying from this pandemic is higher than we think,” said Steven Woolf, director emeritus of the Center on Society and Health at Virginia Commonwealth University, who has conducted independent analyses of excess mortality. “This study shows it. Others have as well.”

The data cover the period Feb. 1 to Sept. 16, meaning that excess deaths have almost certainly reached 300,000. Woolf said they are likely to hit 400,000 by the end of the year. The numbers were assembled by the National Center for Health Statistics, a unit of the CDC.

Outside analyses, including some by The Washington Post and researchers at Yale University, have found two main causes for excess deaths. Many probably were the result of covid-19, although they were not recorded that way on death certificates. Others are probably the result of deaths at home or in nursing homes from heart attacks, diabetes, strokes and Alzheimer’s disease, among people afraid to seek care in hospitals or unable to get it.

Overall, the CDC found “that excess deaths have occurred every week since March, 2020,” with a peak during the week of April 11 and another during the week ending August 8. Those dates roughly coincide with the virus’s surge into the New York metro area near the start of the outbreak and a second major rise across the Sun Belt when many states reopened too soon in an effort to revive flagging economies.

The United States is in the midst of another sharp increase in coronavirus infections, this one centered in the Upper Midwest and Plains states. The seven-day rolling average of cases, considered the most accurate barometer, is near 60,000 per day. At least 219,000 people have died from covid-19 so far, according to data kept by the Washington Post.

All told, an estimated 285,404 more people died than would be expected in a typical year, the CDC reported.

While the virus continues to prey mainly on older people and, disproportionately, African Americans and Hispanics, the rate of excess mortality among 25- to 44-year-olds was less expected. Among 45- to 64-year-olds the increase was 14.6 percent, and among 65- to 74-year-olds it was 24.2 percent.

The unexpected mortality rate of adults in the prime of their lives, from 25 to 65, has been a source of ongoing concern in recent years, especially since a spike in deaths from drugs, alcohol and suicide was recognised.

Did you find apk for android? You can find new Free Android Games and apps.
Sharing is caring:
world news, Covid-19 Covid-19, World News Comments Off on Covid-19 pandemic results in 285,000 more U.S. deaths than in a typical year, CDC finds Print this News