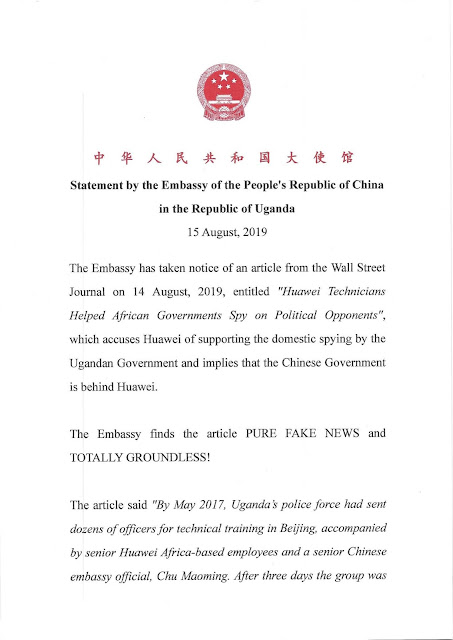 The Embassy has taken notice of an article from the Wall Street Journal on 14 August, 2019, entitled ”Huawei Technicians Helped African Governments Spy on Political Opp onents”, which accuses Huawei of supporting the domestic spying by the Ugandan Government and implies that the Chinese Government is behind Huawei.

The article said ”By May 2017, Uganda s police force had sent dozens of offic ersfo r technical training in Beijing, accompanied by senior Huawei Afri ca-based emp loy ees and a senior Chinese  to the company at Shenzhen headquarters, where Huawei executives shared details on the surveillance systems it had built across the world, according to Ugandan security officials who were present.

Mr. Chu played a crucial intermediary role in the talks. He accompanied the delegation to meetings with China Public Security Agency in the ministry cube-like complex near Tiananmen Square, where they were shown the capabilities of the Chinese surveillance state. Mr. Chu then flew with the group to Shenzhen and sat in on meetings with Huawei executives, according to the Ugandan officials present.”

The journalists gave such a vivid account, as if they were with Mr. Chu then. However, the Embassy has to point out that this is UTTERLY UNTRUE. As a matter of fact, Mr. Chu Maoming had stayed in Uganda for the whole year of 2017, during which time he had never gone back to China.

Such being the case, the Embassy has to seriously doubt the credibility and reliability of the whole article, as well as the professionalism and the basic qualifications of the journalists, who are serving such a big media house as Wall Street Journal.