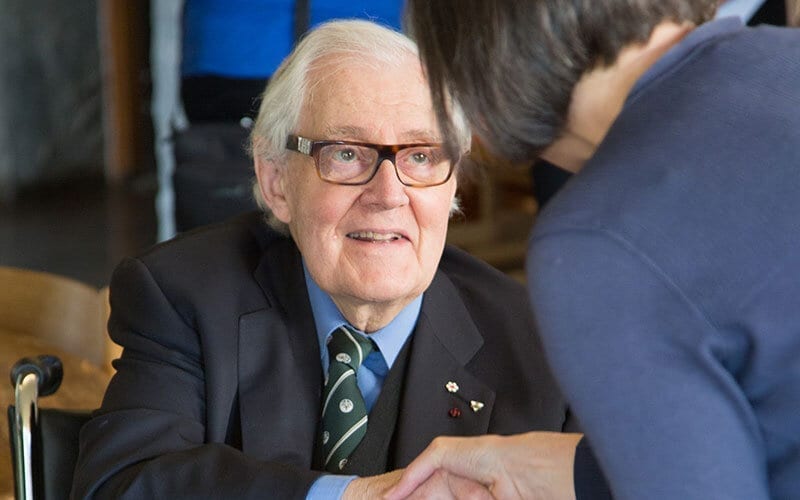 CBIE remembers one of its founders, Professor Thomas H.B. Symons

CBIE remembers Professor Thomas H.B. Symons, who passed away on New Year’s Day at the age of 91.

As a student at the University of Toronto in the 1940s, Professor Symons was part of a small group of inspired youth who founded CBIE under the banner: Friendly Relations with Overseas Students (FROS). With a long and celebrated career as an academic and senior administrator, Professor Symons continued to be a strong supporter of CBIE’s mandate, championing the role of international education in both nation and peacebuilding.

Professor Symons was the founding president of Trent University (1961-72) and founding vice-president of the Social Sciences and Humanities Research Council of Canada (1978-84). He is recognized for his role as chairperson of the Commission on Canadian Studies (1972-84). He understood the value of a Canadian presence on the broader international academic stage and demonstrated his commitment to this principle through substantial international service. This work included participation in the Commonwealth Standing Committee on Student Mobility (1980s), chairperson of the International Board of United World Colleges (1980s) and chairperson of the Association of Commonwealth Universities (1970s).

“Our CBIE Secretariat team extends our heartfelt condolences to the Symons family on the passing of Professor Symons,” said Larissa Bezo, President and CEO of CBIE. “We are humbled by Professor Symons’ creative and foundational institution-building work over these many decades in helping to shape the trajectory and overall field of international education in Canada.”
Professor Symons will be remembered for his passion for scholarship, commitment to his community and distinguished service to his country.

We invite you to learn more about Professor Symons’ life and legacy on Trent University’s special tribute website.