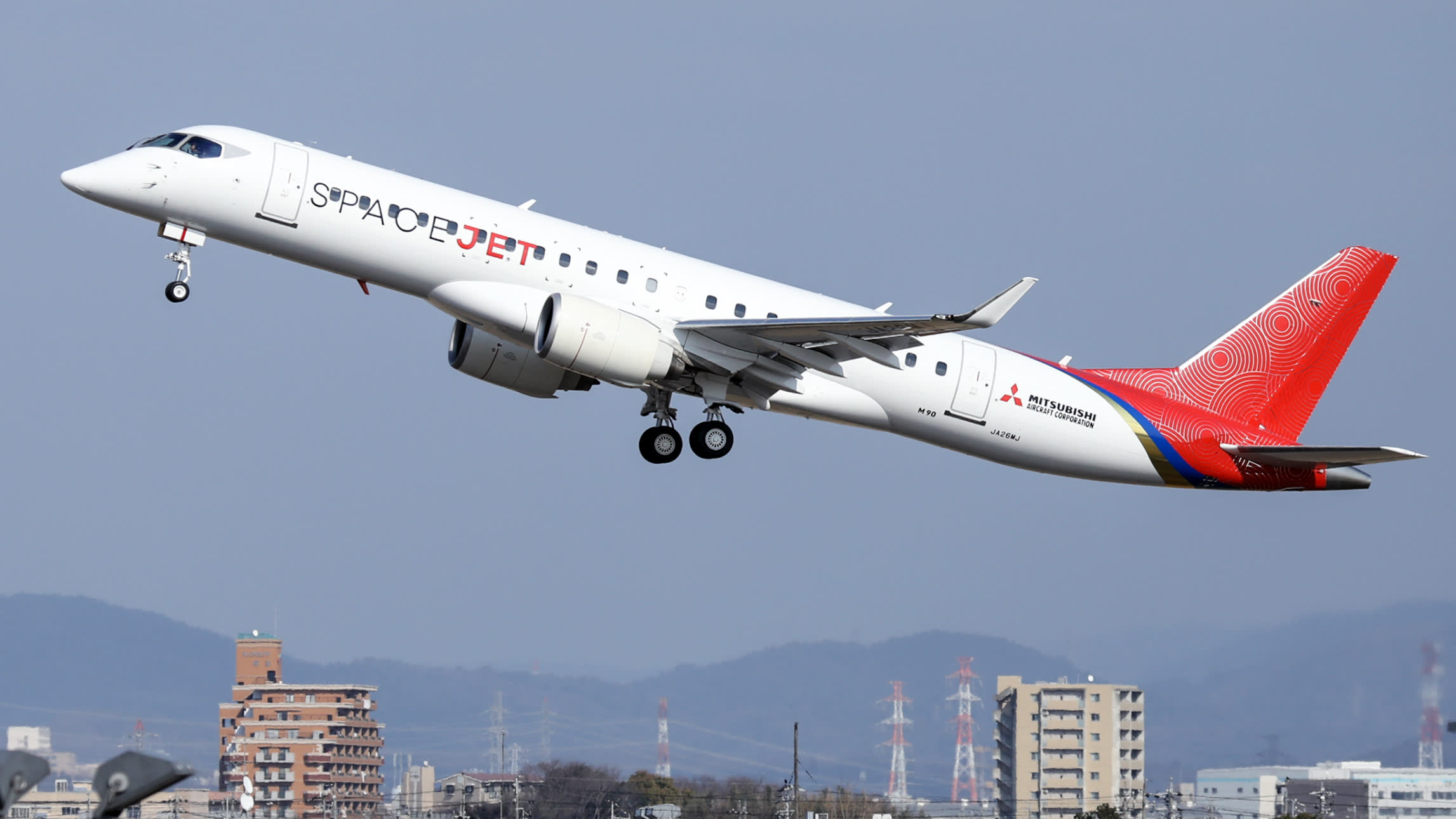 Below, let me give you links which might help.

Airbus Buys Bombardier Out Of Commercial Aviation For $591 Million https://ift.tt/2YJROt6

Bombardier exits commercial aviation by selling stake in A220 jet program to Airbus and Quebec https://financialpost.com/transportation/airlines/update-1-airbus-to-buy-rest-of-bombardier-stake-in-a220-passenger-jet-programme

THEREFORE, threatening me that Uganda Airlines, Kenya Airways or Tanzania Airways will fly to Canada to arrest me is really stupid. You people cannot even afford to even fly your own airlines withing Africa and you talk about flying to Canada. Using the planes we sold to you. Using sijui, what authority? Do you know that most Ugandans do not even know when our country is getting the 2 Airbuses from France? Those planes were not even on the AIR PLANE ORDER LIST for Airbus in 2019.

A SpaceJet takes off at Nagoya airport in Japan. Mitsubishi Heavy Industries has made cuts to the program. (Photo by Koji Uema)

TOKYO — Mitsubishi Heavy Industries marks a milestone in its aviation ambitions on Monday by integrating the commercial jet business of Canada’s Bombardier, even as doubts grow about the Japanese company’s ability to keep its own commercial jet program on track at a time of airline industry upheaval.

MHI’s $550 million purchase of Bombardier’s global network of service centers was meant to secure a foothold in the aircraft servicing business and provide a maintenance platform for its own Mitsubishi SpaceJet family of next-generation regional aircraft under development for 12 years.

But MHI’s ability to finance the much delayed program is under renewed scrutiny as the short-term challenge of the coronavirus crisis weighs heavily on its finances.

Last month, MHI decided to shutter SpaceJet’s overseas operations, consolidate activities at its headquarters in Nagoya and suspend all flight testing. Mitsubishi Aircraft, the program operator, has approximately 2,500 workers — 1,800 in Japan, some 100 at the development center in Montreal, 160 at the U.S. headquarters in Renton and 450 at the flight test center in Moses Lake, both in the state of Washington.

MHI fell into the red for the first time in 20 years for the year ended in March and is struggling to shoulder the cost of the SpaceJet program, in which it has invested at least 716 billion yen ($6.7 billion). S&P Global downgraded company debt to BBB plus from A minus on Feb. 19, due to the growing strain the program is putting on finances. The rating company warned of a further downgrade if project costs surge beyond present assumptions.]

MHI, also a core supplier to Boeing, says it remains committed to the SpaceJet program, at least in the long-term. “As we consolidate, the hope is to reduce redundancies while still maintaining the core competencies we have developed,” said a spokesman for Nagoya-based Mitsubishi Aircraft, which is overseeing the program.

That the Bombardier acquisition will have to be written off entirely underscores MHI’s financial challenge. There is little demand for new aircraft or maintenance services, as 60% of the world’s 26,000 passenger jets are grounded during the pandemic, meaning they require no servicing. Bombardier’s network of service centers around the world repairs and maintains 1,250 jets flown by 130 operators.

Global passenger jet traffic has been down about 80% from a year earlier since April 1, according to data from aviation analytics company Cirium.

A Mitsubishi Aircraft spokesman stressed that the retrench is not the first step in canceling the SpaceJet program.

“Because of the cost control measures and budget directives that forced us to close our flight test facility at Moses Lake, we are putting the aircraft into storage,” the spokesman said, adding that a small team will continue to maintain the aircraft. “Since we are focused on cost control measures now, we will focus on [the] validation and documentation” portion of type certification, he added, referring to paper work for certification with the Japan Civil Aviation Bureau and work to validate it with the U.S. Federal Aviation Administration and the European Union Aviation Safety Agency.

After more than 3,000 hours of actual flight testing, Mitsubishi Aircraft officials have said that the company’s 88-seat aircraft for the Japan market, SpaceJet M90, was close to type certification, and were eyeing that to be achieved in the spring of 2021.

The coronavirus, however, upended the plan. “When the whole industry is downsizing, right-sizing and fleet-optimizing, the last thing they need is a brand-new airplane, all new training, all new spare parts,” said David Pritchard, associate professor of business at the State University of New York Empire State College.

In such an environment, MHI has no choice but to control costs and has frozen its ambition to develop, certify, and mass-produce the SpaceJet M100, a 76-seater for the lucrative U.S. market — the main target for the SpaceJet program.

Mitsubishi Aircraft has company orders for 163 aircraft, options for 124 and letters of intent for another 200, most of them for SpaceJet 100. But those orders could be in jeopardy if the buyers go out of business.

Boeing CEO David Calhoun predicted in May that a major U.S. airline could go under, warning that it will take a full-three years for air traffic to return to the pre-crisis level and another two years for the growth rate to recover.

With the industry in survival mode, “cash is the king,” Pritchard said. “As much as I hate that statement, it’s so true.”

He argues that MHI will have to find a partner to fund the project and said that Commercial Aircraft Corporation of China, or Comac, is the most logical one, noting the Chinese aircraft maker’s deep pockets and its desire to access Bombardier’s global service network and Mitsubishi’s experience in FAA certification.

Comac will form a joint venture either with Mitsubishi Aircraft or its rival Embraer of Brazil, and the one that doesn’t get such a partner “will not be around,” Pritchard predicted.

There have already been reports that Comac is reaching out to Embraer for collaboration. The Brazilian company already has over 80% of the Chinese market for planes carrying 150 passengers or less, and maintains a dedicated office for the country.

Hirotaka Yamauchi, director of the Japan Transport and Tourism Research Institute, a Japanese government affiliate, says it’s highly unlikely that MHI, the nation’s top defense contractor, will partner with a Chinese state-owned company. Further, SpaceJet’s billing as a ‘national project’ has also made it difficult to bring in foreign capital.

Aircraft manufacturing is a highly concentrated industry, and only Airbus and Boeing have the financial, engineering and marketing wherewithal to support a major jet program. But both companies reported net losses last year and are now too consumed with their own problems to throw a lifeline to others.

Therefore, Yamauchi doesn’t expect realignment to happen anytime soon. But, he said, “MHI will eventually need a partner” for the SpaceJet program.

Did you find apk for android? You can find new Free Android Games and apps.
Sharing is caring:
CANADA, business, UGANDA Uganda, Canada, Business Comments Off on Canada’s Bombardier sold its commercial aviation business a long time ago Print this News

NTVUganda has added ENTERPRISE TALK SHOW: Skills on how a teacher used his passion to start a shoe making business video