By The Canadian Press via CBC News 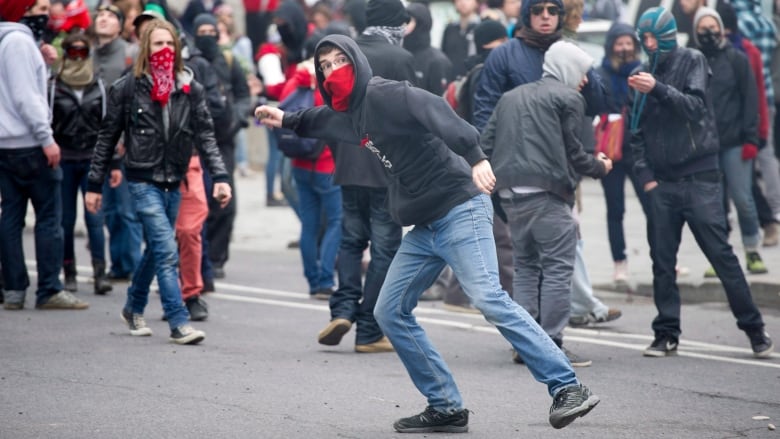 A demonstrator throws a rock towards the police line during a student demonstration outside the Montreal convention centre. (Paul Chiasson/Canadian Press)

The mayhem reached deep inside the convention centre, where Charest’s keynote speech was delayed after a group of protesters gained access to the building and confronted police guarding the meetings.

Two police officers and at least two protesters were injured in the standoff, and 17 people were arrested.

Charest admonished the students and said the social disruption is “unacceptable.”

“This is 2012, this is Quebec. We have had ministers find tanks of gas on their verandas… Molotov cocktails in front of their offices. There are ministers who have had death threats,” the premier said.

“I find it unacceptable that one student association refuses to condemn violence,” he added, singling out CLASSE, the movement’s most militant group.

Charest said debate over Quebec tuition reaches back two decades, and his government’s decision to raise fees was made over a year ago after consultation with different groups.

His Liberal government has already “extended a hand” to student groups about education financing and “increased bursary and loan programs.”

But many students say the tuition protest is about more than the cost of university education.

“It’s not just the tuition increase,” said Alexis Remartini, 18, who made a 60-kilometre bus trip from St-Hyacinthe to attend the Montreal protest.

“The movement has grown to include other things we don’t agree with.”

University professor Guy Dufresne said he was manhandled by riot police. A CBC camera crew shot footage of Dufresne pushed against a car, rubbing his arm in pain.

“It’s disgusting. Shame on the police,” he said.

Some students questioned whether the activism was going too far. Connor Neuendorff, a 19-year-old Concordia University student, was on his way to look for a job when the protest activity blocked his path.

“As far as the students making a valid point, if the public’s going to side with the students after this, then I’d be really surprised,” he said.
Protesters clashed with police

Friday’s protest started midday, with students surrounding the Palais’s entrance, with some building barricades using construction materials from a nearby work site. 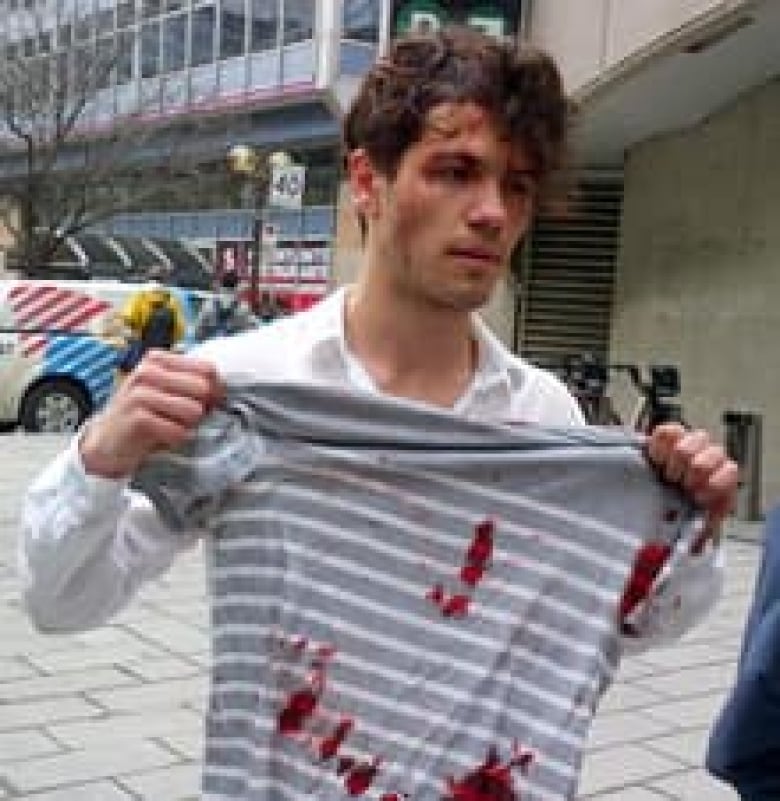 A student protester holds his bloodied shirt during a protest in downtown Montreal on Friday. (Peter Akman/CBC)

The clash also saw someone open a fire hydrant, while rocks and red paint were thrown at the conference centre.

Inside, Charest began speaking an hour behind schedule, but apologized for the delay and thanked people for their patience.

He called the Plan Nord symposium an important event for Quebec’s future and didn’t directly mention the student protesters outside.

But Charest joked with the audience, slying referring to protesters outside.

During his keynote address, the premier said his Northern plan is so popular that throngs of people were clamouring to get into the building. Smiling, Charest promised jobs for everyone, hopefully in the far North.

Charest issued a clarification later in the day, stating he and his government are taking the protests “very seriously.”

He condemned them afterwards while meeting with reporters.

Student groups have organized near-daily demonstrations since they declared an unlimited boycott on classes nearly two months ago.

At issue is an increase that will see tuition fees rise by $1,625 over the next five years.

The government has refused to back down on the increases despite the student unrest.

Quebec’s tuition fees remain the lowest in Canada, even with planned increases.
===
With files from the Canadian Press