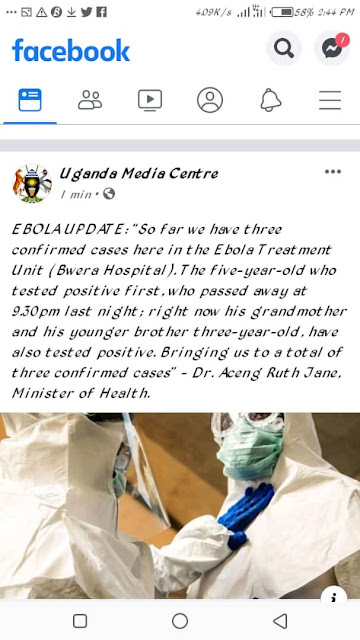 It would be unconscionable for our tax payers in Uganda to continue funding the Military Dictatorship of Yoweri Museveni. I can compile the atrocities that regime has committed over the last 33yrs and publicize them.

There is nothing like Diplomacy with Uganda.  It is only blackmail.  That dictator and his goons are killing innocent unarmed citizens daily.  They are evicting people off their land to put them into IDP camps.  If you read the work Canada has done for Uganda, you will find the Gulu Walk in Toronto where this regime had herded Ugandans in Acholi into camps so that the regime could grab land and impoverish Northern Uganda.

If you read about the original #Bududa #Landslides, you will find out that every penny that was donated to Uganda to resettle my people from the hills of Mt. Elgon was stolen by government officials.

I also challenge you to find out from the UNHCR.  Uganda has been inflating numbers of refugees for years and it is only finally this year that some donors are cutting off funding.

Do you remember when the Uganda regime embezzled 438mln Euros from The Global Fund?  I think the person running it then was the Canadian former MP Hon. Svend Robinson. Maybe the person after him but this was a story that Canada did not pay attention too yet we fund Uganda.

EPORT from The New Humanitarian
Published on 24 Mar 2006
[This report does not necessarily reflect the views of the United Nations]
A commission of inquiry grilled Uganda’s health ministers this week over a corruption scandal that NGOs say prevented donor money from reaching the severely sick.

The commission investigating the suspension of funding worth hundreds of millions of dollars by the Global Fund for AIDS, Malaria and Tuberculosis has quizzed 130 Ugandan government officials and members of civil society over allegations of financial mismanagement and nepotism.

In August 2005, the Geneva-based fund suspended five grants totalling over US $200 million after a report by independent auditors PriceWaterhouseCoopers raised serious concerns about “inappropriate expenditure and improper accounting”.

Uganda has received accolades for leading Africa’s most effective anti-AIDS campaign, and had received some $45 million, out of $201 million to be disbursed over two years, before the Global Fund stopped releasing further payments.

The fund lifted the suspension in November 2005, but only after the government officials responsible for handling the funds had been suspended from their duties and replaced by an international accounting firm, Ernst & Young.

“To steal money intended for … medication, food and welfare is to steal from them [patients] their last glimmer of hope, and to pull the only rug from under their feeble feet,” said Justice James Ogoola, who is heading the inquiry.

In the aftermath of the suspension, the government sought to reassure Ugandans that lifesaving antiretroviral treatment (ART) would not be affected.

A Ministry of Health spokesman, Dr Sam Okware, said Uganda had surpassed its target to have 60,000 HIV positive people on ART by the end of 2005.

“I believe we have 69,000 people receiving ART, so you can see the suspension had no effect,” he commented.

Asked whether the suspension was likely to affect the provision of ART in the coming months, Okware confirmed, “we received the latest consignment on time, about one month ago, and I took personal responsibility to ensure their immediate disbursement.”

However, non-essential programmes have been severely affected.

A Ugandan NGO, The AIDS Support Organisation (TASO), should have received two instalments of Global Fund money to assist community-based organisations and government hospitals, but TASO’s director of advocacy, Peter Sebandja, said the organisation would not receive the second payment, worth about $110,000, until new procedures had been put in place.

“It’s frustrating,” he said. “We made promises to HIV-positive people but have kept them waiting while we wait for the second instalment of funding. Our projects have been set back by months, so it is back to the drawing board.”

The Agency for Co-operation and Research in Development, ACORD, obtained approval for funds totalling $78,000 to support community-based organisations working with children orphaned by HIV/AIDS in northern Uganda, but has so far received only half the pledged funding.

In northwestern Uganda a two-decade campaign of fear waged by the Lord’s Resistance Army has forced more than 1.6 million people into squalid internally displaced persons’ camps, in which ACORD estimates the HIV prevalence rate could be double that of the national average of six percent.

“AIDS will kill more people in the north than the war itself,” said ACORD country manager Geroge Omona, “but the community-based organisations we support with Global Fund monies have had to withdraw their activities, as we are still waiting for the remaining money six months on.”

Ugandans have been horrified at the ease with which officials and NGOs diverted money destined for the desperately sick.

The Global Fund pools money from different donors and allocates funding on the basis of proposals submitted by recipient countries, the idea being that they should maintain a strong role in their own development rather than acquiesce to the demands of donors.

While the PriceWaterhouseCoopers report stated there was no evidence of corruption or fraud, Ogoola’s Commission of Inquiry has spent several months assessing whether the conduct of the project management unit (PMU), which oversaw the implementation of all Global Fund-financed projects, amounted to embezzlement.

“It was like turning the tap on but not caring what happened to the water at the other end. Whether it was ineptness or corruption will come out in the inquiry.”

Uganda’s Minister of Health, Jim Muhwezi, initially said the problem lay with a small amount of missing paperwork from local charities running operations in remote parts of the country.

Those words came back to haunt him when he appeared before the commission on 21 March. During the course of the inquiry, it was revealed that allegations of misuse of funds and abuse of power went all the way to ministerial level.

Questioning Muhwezi on his involvement in the recruitment of PMU officials, Ogoola said: “I put it to you that you personally interjected yourself [in the hiring of staff], with no background information, and that you did so with premeditation.”

Muhwezi denied any improper involvement in the establishment of the PMU.

Staff members of various non-governmental organisations, government departments and the PMU have appeared before the national commission of inquiry, sometimes providing shocking details of how the money was squandered. One such allegation is that the ministers used over $30,000 in allowances during 2004 for the Christmas season.

State minister of health Mike Mukula appeared before the commission on 20 March and responded to Ogoola’s probing over accounting irregularities by stating: “I have never spent a shilling [Uganda’s monetary unit] beyond my terms of reference as a minister. Ministers should not be expected to know the finer details of funding.”

Describing some of the Ministry of Health’s accounting as “nonsensical” and “a heap of rubbish”, Ogoola told Mukula: “You are so detached from accountability. You cannot run away from your responsibilities, you are a minister – every shilling is your responsibility.”

Four investigators from Britain’s Serious Fraud Office are in Uganda to back up the Commission of Inquiry and, according to a Western diplomat, their presence would “lend credibility” to the ongoing investigation. It is thought the British team will review the evidence gathered from over 130 witnesses, with a view to finding other possible areas for investigation.

A GREATER ROLE FOR CIVIL SOCIETY?

Leading figures in Uganda’s civil society responded to the scandal by calling for a rethink of the philosophy and processes behind the Global Fund’s allocation of money.

“When you put this money into a ministry which is having financial problems you must expect problems,” he remarked. “I think the best thing to do is to give the money to national and international NGOs that will not be influenced by government, so they can manage a clean policy on HIV, tuberculosis and malaria.”

According to the finance ministry’s Byaruhanga, it was not a straight choice between civil society and the public sector. “Every stakeholder has a role to play. We are not opposed to civil society being a primary recipient, but the fundamental issue is: do they have the necessary financial and managerial capacity to fulfil this role?” he asked.

In a written statement to PlusNews, the Global Fund said civil society would have a role to play in overseeing the activities of the new management unit. Grants could only be proposed by a Country Coordinating Mechanism (CCM), which must “contain a broad representation, a partnership between all stakeholder groups within the country, including government, civil society, the private sector and affected communities”.

However, concerns lingered among civil society partners. “We can’t rule out a repeat because, at the end of the day, the government is still the principal recipient. We can contribute to the proposal, but the day-to-day management of the funds remains in the hands of government,” said one member of the CCM who spoke to PlusNews on the condition of anonymity. “I would have wanted to see more checks and balances,” she added.

Whether improved checks and balances are in place will be known in September 2006, when Ernst & Young hand over to a new management unit. The Ministry of Finance has until the end of June to propose a new fund-handling body, capable of managing a project worth hundreds of millions of dollars in the best interest of people with HIV/AIDS.

Top of the agenda, the ministry says, is to ensure improved accountability structures are in place to restore public faith in the government.

Did you find apk for android? You can find new Free Android Games and apps.
Sharing is caring:
museveni, human rights, corruption, graft, UGANDA, global fund Uganda, Human Rights, Museveni, Corruption, Graft, global fund Comments Off on CANADA should not send any money to Uganda for ebola or Bududa landslides Print this News