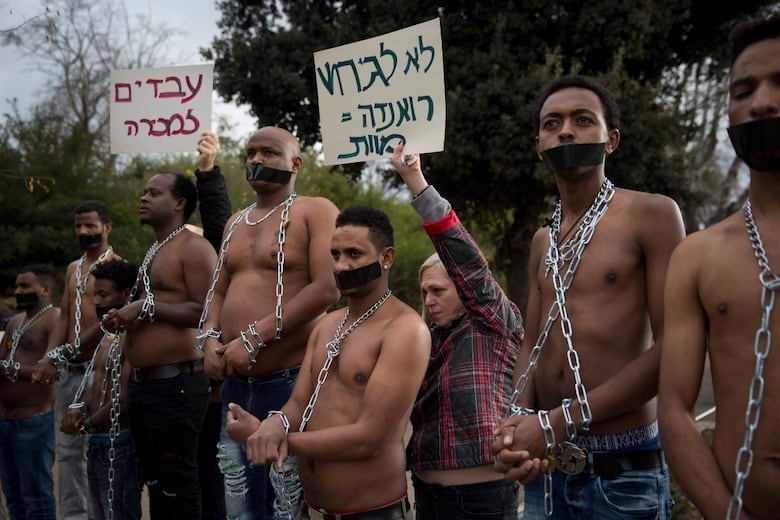 Outside Israel’s parliament, Eritrean migrants wear chains to mimic slaves at a January protest against the government’s policy to deport African asylum seekers from Israel. Hebrew signs read, ‘No for deportation, Rwanda equal to death’ and ‘Slaves for sale.’ (Oded Balilty/The Associated Press) 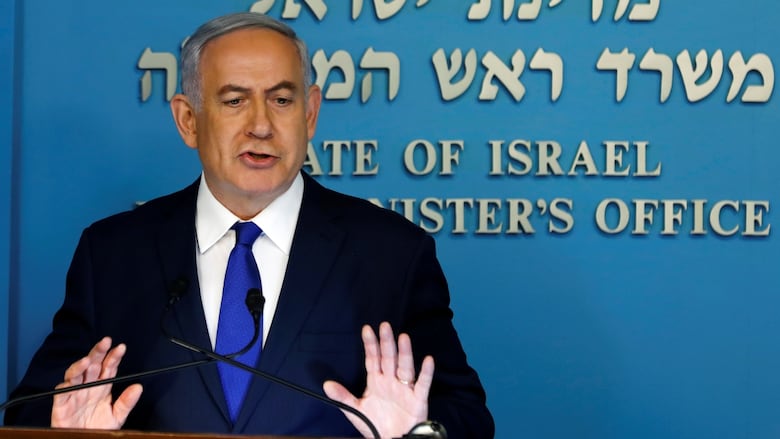 Israeli PM Benjamin Netanyahu’s original plan to deport thousands of African migrants to what is believed to have been Rwanda or Uganda was met with stiff opposition in Israel and abroad. (Ronen Zvulun/Reuters)

ASSOCIATED PRESS via CBC – Israeli Prime Minister Benjamin Netanyahu said Monday that Canada, Italy and Germany will take in some of his country’s African migrants under an agreement Israel reached with the United Nations Refugee Agency to scrap his contested deportation plan.

Under the deal with the UN High Commissioner for Refugees, Israel said it plans to relocate more than 16,000 migrants to Western countries, from the 35,000 to 40,000 who have arrived mostly from dictatorial Eritrea and war-torn Sudan.
Africans in Israel worry deportations could be a death warrant
Canada raises concern over Israel’s deportation plan

“This is a unique agreement between the UN commissioner and the state of Israel, that takes 16,250 people out, takes them out to developed countries like Canada, or Germany and Italy,” Netanyahu said on live television. “That is the commitment the UN high commissioner has made — to organize it and even to fund it.”

Netanyahu’s office said the “unprecedented understandings” would be implemented in three stages over five years, with much of those remaining in Israel integrated and granted official status.

A UNHCR spokesperson confirmed that an agreement had been reached, but gave no details.The refugee agency had urged Israel to reconsider its original plan, saying migrants who have relocated to sub-Saharan Africa in the past few years were unsafe and ended up on the perilous migrant trail to Europe, some suffering abuse, torture and even dying on the way.
Secret deportation agreement

The deal lifts the threat of a forced expulsion to unnamed African destinations, widely believed to be Rwanda and Uganda, with whom Israel had reached a secret agreement. Critics at home and in the Jewish community abroad called that proposed response unethical and a stain on Israel’s image as a refuge for Jewish migrants.

The optics of black asylum seekers accusing the country of racism has turned into a public relations liability for Israel, and groups of Israeli doctors, academics, poets, Holocaust survivors, rabbis and pilots had all appealed to halt the government’s original deportation plan. Before Monday’s announcement, the government had remained steadfast, bristling at what it considered cynical comparisons to the plight of Jews in Nazi Germany. 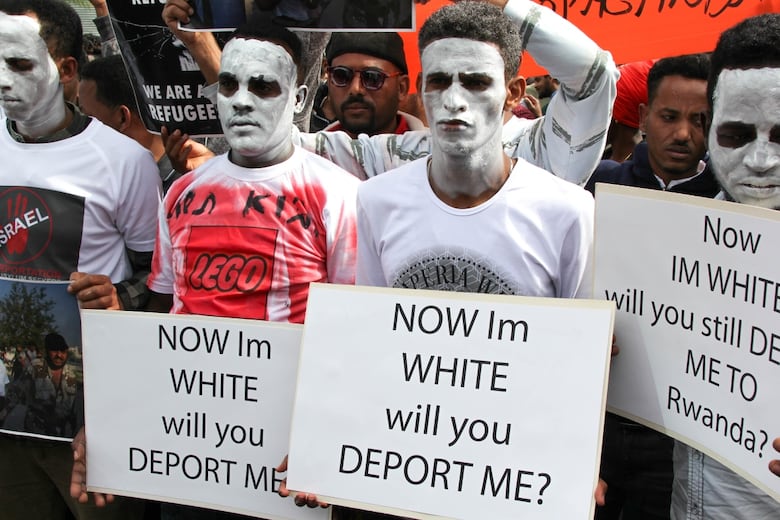 Men and women from Eritrea and Sudan hold a silent protest in February outside the Rwandan Embassy to Israel in Herzliya.

The Africans started moving toward Israel in 2005, after neighbouring Egypt violently quashed a refugee demonstration, and word spread of safety and job opportunities in Israel. Tens of thousands crossed the porous desert border before Israel completed a barrier in 2012 that stopped the influx. But Israel struggled with what to do with those already in the country, alternating between plans to deport them, and offering them menial jobs in hotels and local municipalities.

Netanyahu’s office said that legal obstacles and ensuing problems with the proposed third-country African destinations forced the government to amend its plans and come to an agreement under UN auspices. It said the new framework will include a development and rehabilitation plan for southern Tel Aviv. 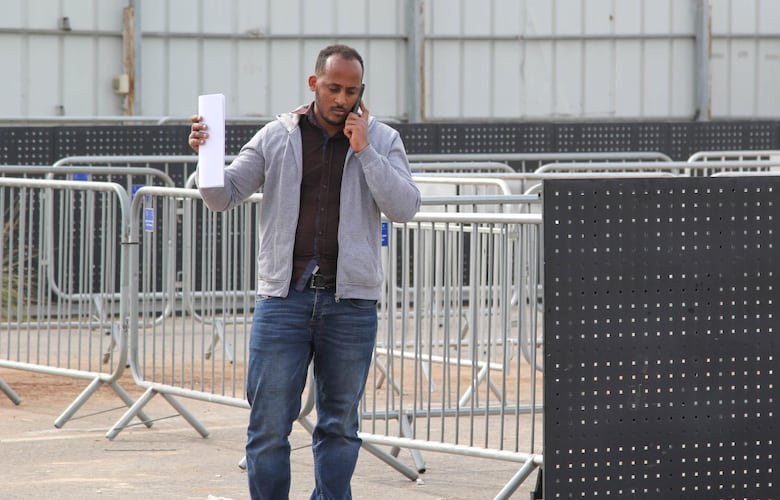 A man originally from Eritrea stands outside an Israeli immigration office, holding a document giving him 60 days to leave Israel or face imprisonment. (Derek Stoffel/CBC)

Protests also appear to have played a part.

The government had previously said women, children and families, for example, would be exempt from the deportation order, as well as those who escaped the genocide in Sudan’s western region of Darfur. Those who will leave Israel are likely to mostly be single men from Eritrea — where the regime is one of the world’s most oppressive and men are forced into a military service with slavery-like conditions.