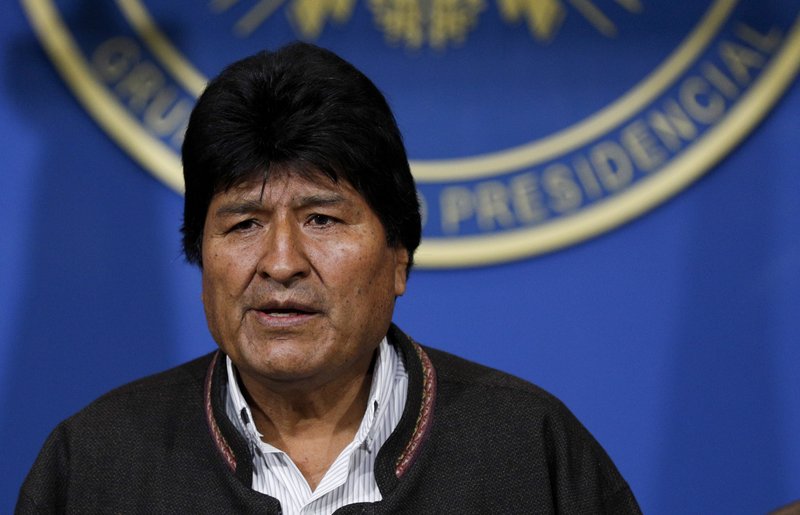 LA PAZ, Bolivia (Associate Press) — Buckling under mounting pressure, Bolivian President Evo Morales on Sunday called for a new election after his claim to have won a fourth term triggered suspicions of fraud and set off deadly protests.

South America’s longest-serving leader made the announcement after a preliminary report by the Organization of American States found a “heap of observed irregularities” in the Oct. 20 presidential contest and said a new vote should be held.

The unrest that has left three people dead and over 100 injured in clashes between supporters and opponents of Morales represents the biggest crisis in his nearly 14 years in power.

Without mentioning the OAS report, the socialist leader said he would replace the country’s electoral tribunal and urged all political parties to help bring peace to the Andean nation.

“We all have to pacify Bolivia,” he said.

Bolivians honked car horns and broke into cheers and applause in the streets as the OAS findings came out.

“The battle has been won,” said Waldo Albarracín, a public defender and activist. “Now, the duty is to guarantee an ideal electoral tribunal.”

The man Morales claimed to have defeated, opposition leader and former President Carlos Mesa, said the OAS report showed “monstrous fraud,” and he added that Morales “can’t be a candidate in new elections.”

Morales did not say whether he will run again.

“The priority is to choose a new electoral tribunal and figure out when we’ll have the new elections,” he told local radio Panamericana.

But many who were once excited by his fairy-tale rise have grown wary of his reluctance to leave power.

He ran for a fourth term after refusing to abide by the results of a referendum that upheld term limits for the president. He was able to run because Bolivia’s constitutional court disallowed such limits.

After the Oct. 20 vote, Morales declared himself the outright winner even before official results indicated he obtained just enough support to avoid a runoff with Mesa. A 24-hour lapse in releasing results raised suspicions of vote-rigging.

The OAS sent a team to conduct what it called a binding audit of the election. Its preliminary recommendations included holding new elections with a new electoral body.

“Mindful of the heap of observed irregularities, it’s not possible to guarantee the integrity of the numbers and give certainty of the results,” the OAS said in a statement released by its president, Luis Almagro, on Twitter.

Pressure on Morales increased ominously on Saturday when police guards outside Bolivia’s presidential palace abandoned their posts. Morales was not at the palace at the time.

Officers also climbed onto the roof of a nearby police station, holding signs proclaiming, “The Police with the People.” Police retreated to their barracks in at least three cities.

During the unrest since the election, protesters also torched the headquarters of local electoral tribunal offices and set up roadblocks that paralyzed parts of Bolivia.

“The question now is if the opposition will accept new elections called by Evo after he had already attempted to steal the election,” said Christopher Sabatini, a lecturer at the School of International and Public Affairs at Columbia University in New York and a senior research fellow at the Chatham House think tank.

“They have good reason to be wary that this time will be cleaner. In fact, given what’s at stake and Morales’ actions up until now, there’s even more reason to believe that he’s going to pull out all the stops to ensure reelection.”

« NTVUganda has added Kasaijja wants politicians to speak ahead of prayers video (Previous News)
(Next News) UGANDA: What the parliamentary probe on Makerere carnage is missing »