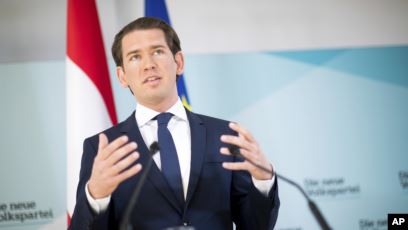 The vote was the latest in a political crisis brought on by a video recording. The video was filmed in 2017, but released only recently. Its images led to the ouster of Heinz-Christian Strache, Kurz’s second in command in the government. Strache is the head of Austria’s Freedom Party, or FPO.

The events do not necessarily mean the political end of 32-year-old Kurz, however. He is still the leader of his People’s Party and wants to lead it back to victory.

His party came in first in the recent European Parliament election.

“I am still here,” he told party activists after parliament voted on Monday.

After the vote, Austrian President Alexander Van der Bellen officially relieved the cabinet of its duties. He asked ministers except Kurz to continue for some time until a temporary cabinet can be made. The next parliamentary election is expected in September.

Van der Bellen also spoke of the video, which was filmed on the Spanish island of Ibiza. In the recording, Strache talked about fixing state contracts.

“The disturbing image of Ibiza… has buried itself deep in our heads, not only here but also, of course, abroad,” the president said.

Strache denies any criminal wrongdoing. He resigned quickly after the video surfaced.

The Reuters news agency says the video recording raised questions about money and influence in Austria. It also shook public trust in the country’s political parties.

Van der Bellen said that the scandal created “a distorted image of our homeland, a different image to what Austria is really like.” He added, “Now it is our task to change that image step by step.”

Did you find apk for android? You can find new Free Android Games and apps.
Sharing is caring:
world news, AUSTRIA AUSTRIA, World News Comments Off on Austrian Chancellor Sebastian Kurz steps down Print this News

« NTVUganda has added Govt to take over funeral of former premier Apolo Nsibambi video (Previous News)
(Next News) Wikipedia article of the day for May 29, 2019 State Route 74 (New York–Vermont) »