Arthur Miller: A View From the Field

This guest blog post by Matthew Barton about the playwright Arthur Miller is part of a series called “Hidden Folklorists,” which examines the folklore work of surprising people, including people better known for other pursuits. It was written soon after Miller’s death in 2005 for the publication Folklife Center News. Matthew Barton worked at the American Folklife Center at that time, and is now the Curator of Recorded Sound at the Library of Congress’s National Audio-Visual Conservation Center.

When the great playwright Arthur Miller died in February 2005, obituary writers focused on his most famous work and his troubled marriage to Marilyn Monroe. Miller’s life and work prior to All My Sonsand Death of a Salesman received little attention, particularly his brief but memorable stint as a fieldworker for the Library of Congress in 1941.

In 1941, the 26 year old Miller was just another struggling, unemployed writer. As a student at the University of Michigan he had won a pair of drama awards, and in 1939 his political satire The Pussycat and the Expert Plumber Who Was a Man had been produced for CBS Radio’s Columbia Workshop while he was making $22.77 a week on the WPA Federal Theater Project in New York. Since then, his career had stalled.

In December 1940, Miller’s friend from the Columbia Workshop series, Joseph Liss, was hired as project editor for the Library of Congress’s Radio Research Project, and he brought in Miller as a scriptwriter. The Radio Research Project was an ambitious foray into broadcasting conceived by Librarian of Congress Archibald MacLeish and funded by the Rockefeller Foundation. MacLeish saw it as an opportunity to use the Library’s resources in a popular forum to educate the American public about the history of a free nation in a time when freedom was under fire.

Miller, Liss and other writers took inspiration from raw material such as the regional surveys of the Federal Writers Project, the holdings of the Library’s Manuscript Division and the collections of the Archive of American Folksong (the precursor of the American Folklife Center’s Archive of Folk Culture). One of Miller’s programs called “Buffalo Bill Disremembered” featured an aging Buffalo Bill Cody looking back at his life, trying to separate fact from fiction. This program struck a chord, and many listeners wrote in with Buffalo Bill stories that had circulated in their families. Another Miller script dramatized the early history of New Orleans. Programs by other writers dealt with the building of the Erie Canal, the history of the tune “Yankee Doodle,” and the story of a Polish migrant in the Jamestown colony.

It was only natural that folklore and folksongs would be used in such programs, but Alan Lomax, the 26 year-old director of the Archive, sought a more active role for his division in the project. In a report to MacLeish, he described a documentary series based on new field recordings that would demonstrate “a new function for radio; that of letting the people explain themselves and their lives to the entire nation.” To that end, Lomax, Liss and others traveled the country in the summer of 1941 in a sound truck outfitted with new disc recording equipment. They interviewed people about their lives, homes and work, and recorded their thoughts about the war in Europe, and if or when the United States would enter the fray. 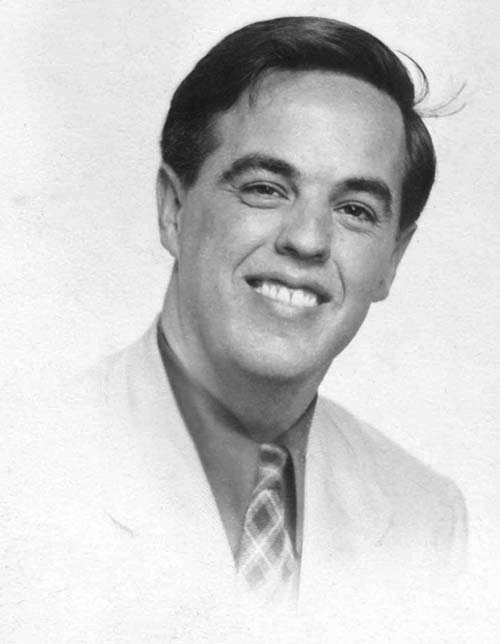 How Miller, who had no experience as a field collector, came to be responsible for collecting the material and writing the script for the sixth and final show is not quite clear, and at the time, Lomax questioned his qualifications. In a note to Radio Research project director Phillip Cohen dated October 15, 1941, the day that Miller set out in a sound truck for Wilmington, North Carolina with engineer John Langenegger, Lomax wrote:

[Arthur Miller] making the trip means for the project to make other sacrifices. Mr. Miller is an awfully nice lad, but if his ability to handle regional materials is evidenced in the New Orleans script and in the Buffalo Bill script, I say he needs some more work before we spend $400.00 on him.

Apparently, the United States Department of Health wanted to borrow a sound truck from the Library for use on a mining safety film to be shot in Wilmington, North Carolina and Miller and Langenegger were provided as a sound crew. Their main job was to interview the miners and safety engineers and gather sound effects.

In 2003, Miller recalled that he had been told to record as many different southern accents as he could on the trip, and there were a great variety in Wilmington. As a result of the new industries created by the demands of the US-UK Lend Lease agreement, the city’s population had doubled in less than two years, with workers and their families streaming in from all over the South.

The finished program included many accents, but its subject was really the people and the town of Wilmington. In a staged opening scene, Phillip Cohen tells Miller:

Get on the Library Sound Recording Truck and go down to North Carolina. There’s a boom on in a town called Wilmington…Ask the folks there what’s going on, what they think is wrong and what’s right. Talk to the people. Get records of their answers, their questions…get Wilmington, North Carolina into that sound truck.

Miller proved to be an exceptional field worker, asking intelligent and direct questions while keeping his informants at ease, whether it was the city manager of Wilmington, the newly arrived shipyard workers in the Wilmington shipyard, their wives in the trailer parks where they lived, or the now unemployed black laborers who had built the shipyard. One Sunday afternoon Miller was led indoors by the sound of singing. There he found 25 African-American women singing old spirituals that they had refashioned into songs of labor protest. A strike at a shirt factory was then in its fifth month, with no end in sight. Miller set about documenting the strike and its music, an experience he would remember for the rest of his life.

Miller and Langenegger returned to Washington on November 5. An undated typed note to Lomax from Miller offers a fascinating glimpse of the young dramatist’s mind at work:

Just to remind you, Alan, of our talk in the restaurant,– in the Negro jobless scene my aim was to keep their talk going in as spontaneous a fashion as was possible. So the dubs should be as close together as possible. In between cut pieces, of course, we don’t want dead silence. Now I remember several pieces of the Negro records which were barren of voices and only the general street and outdoor noise was recorded. If those could be slipped in between the dubs, the realism of the scene could be maintained. Of course the sound of a car passing would do if the above is too difficult.

Joseph Liss’ secretary Evelyn Young forwarded Miller’s finished script to Lomax on December 11, which suggests that Miller, now back in his Brooklyn apartment, may have finished it just before the attack on Pearl Harbor. It timed out at 32 minutes, 22 seconds, a length that could easily be trimmed to the required broadcast length of 29 minutes and 30 seconds—and an edited carbon copy timed out to just over 29 minutes survives. But in an apologetic letter to Miller dated December 21, 1941, Lomax informed him that Phillip Cohen “for reasons which he will explain to you (considerations of National Defense Policy) decided that the strike sequence, Negro unemployment sequence and material about the gay times of defense workers would have to come out of the show. That meant cutting the show down to 24 minutes and I saw nothing else to do but cut it further and make a fifteen-minute program out of it.” In the end, all six programs were cut down to 15 minutes, but it must have been quite a blow for the first-time fieldworker to see some of his best recordings hit the cutting room floor.

Nevertheless, Miller produced a tight 15 minute script, managing to keep some of the strike material, including two songs. The program ended with a ringing call for freedom:

MILLER: But there is no time for talk. The men have ships to build. One ship will slide into the water every twelve days. So this is the voice of the shipyard.

MILLER: And this is Wilmington, North Carolina. A hundred voices talking free and one voice over all the rest, the voice that will keep men free… 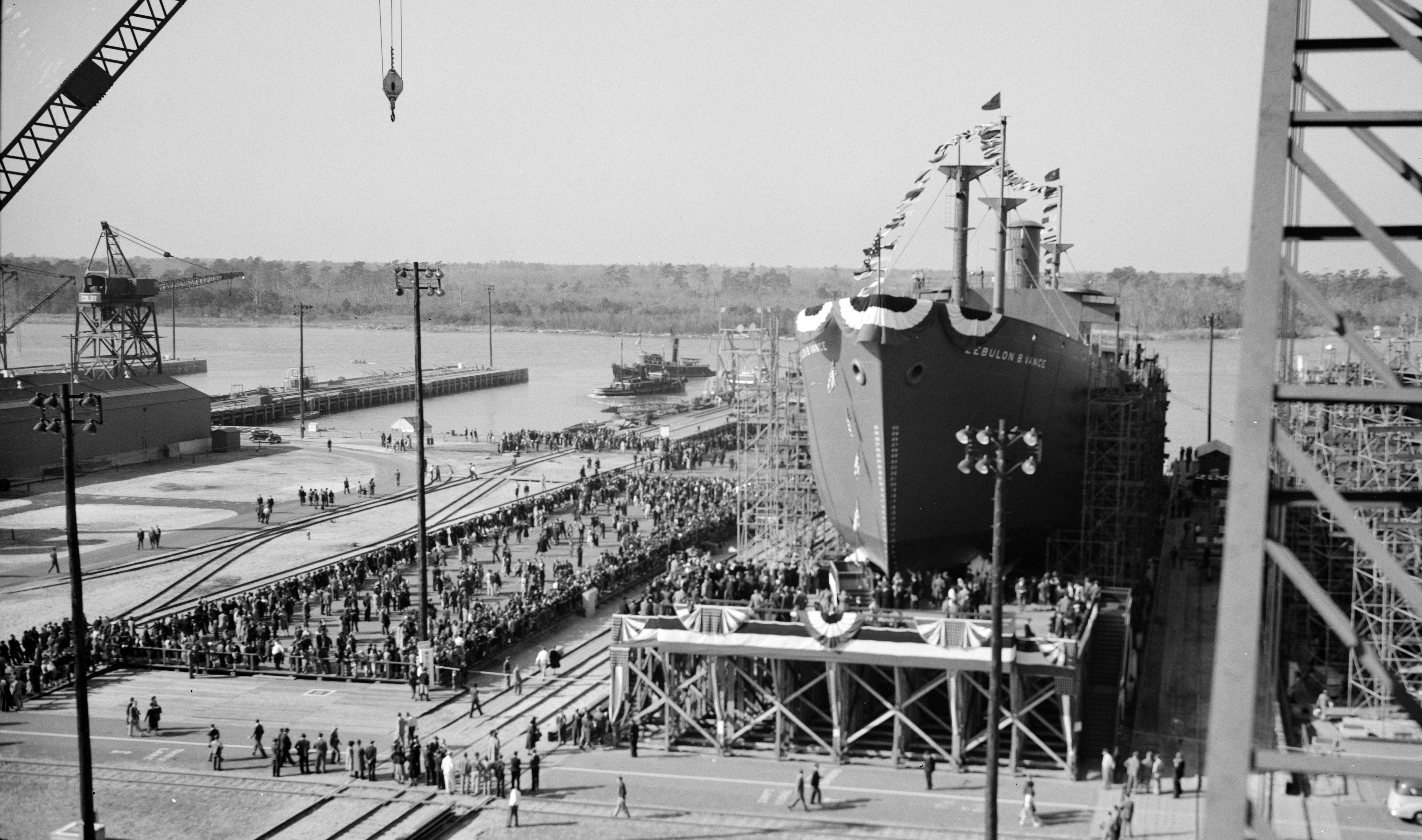 The launch of the liberty ship the USS Zebulon B. Vance on Dec. 6, 1941. This was one of the ships Arthur Miller mentioned at the end of the “This is History” broadcast. This photo is part of the Farm Security Administration – Office of War Information Photograph Collection. Find out more about this photo at this link.

The script called for further shipyard noise at this point, but secretary and typist Evelyn Young got the last word, at least in print, when she entered this bit of dialogue for herself at the very end:

YOUNG: And don’t let me hear you birds ask for another Wilmington Script!! Merry Christmas!!

Miller never forgot his experience in Wilmington. In 1990, he ordered copies of his Radio Research recordings from the Library. Two years before his death, he reviewed and commented on them for Christopher Bigsby, author of “Arthur Miller: A Critical Study,” which became the basis for the BBC Radio 4 program “Arthur Miller: The Accidental Music Collector.”

His recollections were vivid: the mining safety engineer whose breakfast was three bottles of Coca-Cola and a bag of salted peanuts. The octagonal barrel of a shotgun aimed at him by a drunken man who told him to go back to Washington. The voice of a gospel singer who “should have been singing at the Metropolitan.” “Why do I remember all of this?” he asked Bigsby at one point.

Though he never again made field recordings, Miller’s retained some of the methodology. His 1955 play “A View From the Bridge,” had its origins in a bit of Italian graffiti he saw on the New York waterfront: Dové Pete Panto?(Where is Pete Panto?) His inquiries among dockworkers initially met with silence, but piece-by-piece, he assembled the story of a young man murdered by the mobsters who controlled labor on the waterfront.

Miller’s program aired on May 28, 1942. Later that year, in a report to Archibald MacLeish, a once-doubtful Alan Lomax gave the rookie field worker his due:

Mr. Miller shows the town of Wilmington which, since the beginning of the defense program has more than doubled its size. It is a ship-building town and full of the contrasts between the old leisurely way of life and the new trip-hammer tension that the defense program has brought on. Mr. Miller was more direct than we had been in other field efforts and simply walked up to people that he met in trailer camps, factories, and on the streets and interviewed them about what was going on in the city. From this material, we developed an interesting script about this southern boom town. This script was written and narrated by Mr. Miller and it is up to now the most stirring program which we have completed.

« SCHOOL DAYS: July 15th is a birthday for a dear friend (Previous News)
(Next News) Arthur Miller: A View From the Field »

LITERATURE: The Autumn of the Patriarch