Egyptian photojournalist Mohamed al-Rai has reportedly gone missing since Wednesday when he was summoned for questioning by the National Security Agency in Cairo, according to the daily newspaper Al-Arabi Al-Jadeed.

Al-Rai’s family lodged complaints with the prosecutor general and the interior minister on Friday morning, alleging that the photojournalist was subjected to enforced disappearance for more than 24 hours.

On 26 October, the report said that security agents went to Rai’s home to arrest him. But when they could not find him, they left a phone number so that he could call them back. A few hours later, the journalist called the authorities, and was told that he had been summoned by the security services.

Rai went to the police station last Tuesday and was questioned informally for five hours. The investigation centred on the nature of his journalistic work and the places where he works. He was then released, according to the newspaper.

The journalist was summoned again by the security forces on Tuesday evening, and headed to the police station at 2pm on Wednesday. He then disappeared and his family and friends lost contact with him

At least 29 journalists are currently detained in Egyptian prisons, according to the latest statistics released by Reporters Without Borders, while other local human rights organisations estimate that the number has reached nearly 80 journalists and media personalities, including all press and media workers who are members of the union and others.
Israel normalisation deal under scrutiny in Sudan

Sudan’s Foreign Affairs Minister Omar Qamar al-Din has been pressed for clarity over Khartoum’s decision to normalise relations with Israel, according to the online newspaper Arabi21. 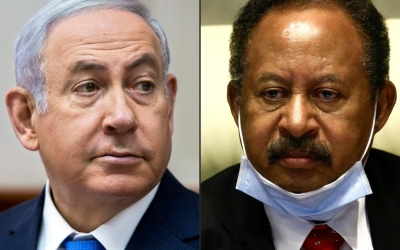 During a political seminar, journalist Ammar Mohammed Adam told the minister: “You are normalising with the Israeli occupation yet you’re being evasive [about the issue]. The whole world talks about Sudan’s normalisation with Israel, yet no clear statements have been issued from your part to deny it.”

He further accused the minister of being responsible for getting Sudan onto the US State Sponsors of Terrorism list in the first place.

“You are the ones who came from Europe and the US after roaming their streets, going to their parliaments, and requesting listing Sudan as a state sponsor of terrorism… you are responsible for putting Sudan on the terrorism list.”

The minister, however, defended the normalisation deal, but said it is so far a “preliminary agreement” that must be ratified by parliament.

“We had no other choice but to seize the narrow opportunity available to us with the approaching US elections, to accept normalisation with the condition that Sudan must first be lifted from the terrorism list,” he told the audience at the seminar hosted by Al-Tayar newspaper in Khartoum.

The United Arab Emirates’ tax haven status had enabled companies operating in France to evade paying billions of euros in tax, a French MP said on Thursday, demanding Paris take a stance against the Gulf country.

During an interrogation session of the French trade commissioner, Franck Riester, by the foreign affairs committee of the French parliament, MP Hubert Julien-Laferriere said that “the issue of tax evasion remains an unsolved issue in the foreign trade of France and the European Union, and concerns all the countries of the union,” reported the London-based newspaper Al-Quds Al-Arabi.

The French parliamentarian pointed out that since tax evasion documents about fake companies in Panama and Dubai were disclosed, several investigations had confirmed how major institutions and multinational companies have been able to manipulate the international financial systems, launder dirty money and exempt them from taxes. “These conducts are unacceptable,” he added

Julien-Laferriere pointed out that several serious investigations have shown that the losses that France has incurred due to tax evasion reached about 100 billion euros, and 30 billion euros for Belgium.

He stressed that these figures were equivalent to six percent of the countries’ gross domestic product, adding that he has questions about the steps taken to deal with countries classified as tax havens.

“Some countries, especially those located in islands, are suitable havens for circumventing international laws,” he said.

“This is also the case of the United Arab Emirates, which has been temporarily classified last year in the blacklist of tax havens drafted by the European Union.”