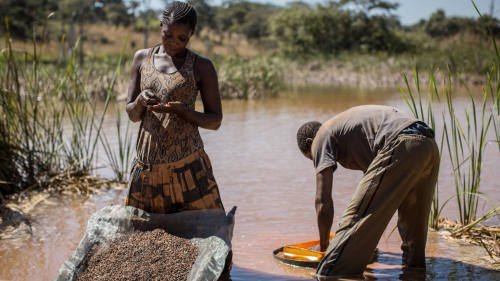 Apple, Google, Microsoft, Dell and Tesla have been sued by a human rights group on behalf of families of children killed or injured while mining the cobalt in the Democratic Republic of Congo that is used in their products.

In the class-action lawsuit, International Rights Advocates claims the companies “aided and abetted” a supply chain for cobalt — a metal critical for smartphones and electric vehicles — that forces children to work in dangerous conditions in the DRC.

“Apple, Alphabet, Dell, Microsoft and Tesla all have specific policies claiming to prohibit child labour in their supply chains,” said IRAdvocates in the suit that was filed in a district court in Washington, DC. “Their failure to actually implement these policies to stop forced child labour in cobalt mining is an intentional act to avoid ending the windfall of getting cheap cobalt.”

Apple and Dell said that they were committed to the responsible sourcing of materials. Both added that they removed cobalt refiners from their supply chains if they were “unable or unwilling to meet” Apple’s “strictest” standards or “if misconduct is found [by Dell]”.

Dell said it was currently investigating the allegations made in the suit.

Google, Microsoft and Tesla did not respond to requests for comment.

The suit is the first to target tech companies for their cobalt sourcing practices and raises the pressure on the industry to take stronger action to acquire the metal responsibly.

The DRC produces about 60 per cent of the world’s cobalt, of which approximately a third comes from unregulated “artisanal” miners who dig by hand. Demand for the metal is forecast to increase rapidly because of the expected growth in electric vehicle use.

[Glencore does] not tolerate any form of child, forced, or compulsory labour

The country’s dominance in the supply of cobalt presents a growing dilemma for tech groups and carmakers about whether to engage to improve conditions on the ground — which comes with its own risks — or source cobalt from other jurisdictions without child labour issues, isolating the DRC from the global supply chains.

Glencore, the world’s largest cobalt producer, supplies the metal to Umicore, a Belgian chemicals group, which then supplies refined material to the tech companies, the lawsuit said. It also identified Chinese producer Zhejiang Huayou Cobalt, as a supplier to Apple, Dell and Microsoft.

IRAdvocates said it had brought the case against the tech companies because it was certain of their connection to the deaths or injuries and the companies were based in the US.

The mining industry has been making efforts to improve the traceability of cobalt. For example, Glencore joined the Responsible Sourcing Blockchain Network last week, which aims to use technology to track the origin of cobalt supplies.

Glencore said it produced cobalt as a byproduct of industrial copper operations and did not purchase, process or produce any artisanally mined cobalt ore. It added that it did “not tolerate any form of child, forced, or compulsory labour”.

The London Metal Exchange, the world’s leading market place for industrial metals, this year set out new rules to allow responsibly sourced metals only to be traded by 2023, which will potentially allow for metals dug up by artisanal miners.

However, critics question whether these initiatives by end users and mining companies go far enough to address forced child labour.

“The case will put further pressure on existing mechanisms to test cobalt traceability. Current mechanisms alone, including the nascent blockchain project in Lualaba [a province in DRC], are not sufficient to ensure supply chains are child labour-free,” said Indigo Ellis head of Africa at Verisk Maplecroft, a risk consultancy. “The only way forward is a multiplicity of solutions to the clean cobalt question.”

« UGANDA: Key news to consider this week (Previous News)
(Next News) Uganda parents must take parenting seriously one of these days!! »