African Americans in the “Forgotten Theater” of World War II 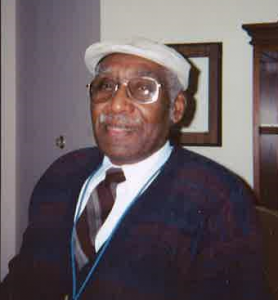 The following is a guest post by Patricia Glaser, a Junior Fellow working with the Veterans History Project (VHP) this summer.

They told us to be careful with our equipment and our clothing when we went to bed that night– be sure to fasten the mosquito netting. Not only to keep out the mosquitos but to keep out the jackals that came through ‘bout every night. Sure enough, that first night […] jackals came right through the tents just like they said they would, howling and making all that noise.” –Private First Class Louis Douglas

Over the course of the research on African-American veterans that I did in preparation for last week’s Junior Fellows’ Display Day, I learned so much about military history and veterans’ lives, in and outside of the service. One part of WWII history in particular captured my interest because I had virtually no knowledge of it until this summer–the China Burma India (CBI) Theater. It is often called “The Forgotten Theater of World War II,” with a very small amount of American soldiers assigned to this region during the war.

Despite being overshadowed by the European and Pacific Theaters of the war, the CBI Theater played an important role in the Allied fight against the Japanese. Initially the plan was to invade Japan from mainland China, but the CBI primarily ended up being a way to keep China supplied in their efforts against the Japanese in the Sino-Japanese War. There were an estimated one million Japanese troops involved in this conflict, and it was in the Allied forces’ interest to keep them preoccupied on two fronts (the other being the Pacific Theater).

One of the biggest undertakings that CBI troops completed was the construction of the Ledo Road, which began in December, 1942. Also called the Stilwell Road (after Lt. General Joseph W. Stilwell, the officer in command of the theater), it was the sole overland supply route spanning 271 miles; starting in Ledo, India and ending at an intersection of the old Burma Road. Much of the Burma Road that connected China and Burma had been destroyed by the Japanese, making the need for a new motorway of utmost importance. Of the 15,000 American troops who were assigned to the road’s construction, more than 60% were African-American men. Black soldiers were given second-hand construction equipment that had been used previously by white troops, and the project wasn’t finished until 1945. These men were not honored for their sacrifices and hard work until 2004, when the Department of Defense recognized them during African American History Month at Florida A&M University.1

There are several digitized collections in the Veteran History Project’s holdings of African-American men who served in this theater. Their oral histories describe an incredibly hard tour of duty with challenges unique to the CBI. One of them is Charles Small, a Technical Sergeant in the 45th Engineer General Service Regiment and medic who helped set up a mobile hospital to treat the soldiers who were building the Ledo Road. He talks about the great effort of these men, who frequently had to re-do work during monsoon seasons because the road would get washed away by the rains. He also played a vital role in providing medical care; he distributed quinine and atabrine to the men to prevent malaria, but says that he never took these medications himself, although amazingly never fell ill while overseas.

However, even on the other side of the world, Small and other African-American troops encountered racial discrimination. In 1942, he embarked from South Carolina on a two-month long journey on the SS Mariposa, a former luxury liner that was converted for soldier transport during the war. When they docked in Australia to re-fuel, he recalled in his oral history, “Black troops were not allowed to get off [the ship]… White troops could,” since the country was so racially prejudiced at the time. Paul J. Wooten, a Technician Four of the 3651st Quartermaster Truck Company, reflected on how he and his fellow soldiers felt about being discriminated against in a segregated Army: “We didn’t like it but we couldn’t say anything about it because it was so universal; it was everywhere you went.”

Wooten also describes in his interview how the severe heat, humidity and rains sometimes made for a gruesome landscape: “The sun was so strong; it would warm up the ground, and the smell of dead Japanese would smell, and it made some of the guys sick. […] Some bodies were stickin’ out of the ground, or layin’ around trees and stuff like that. […] The smell was so sickening.”

Sergeant Jesse W. Greene, Sr. served in both the 45th Combat Engineer Battalion and Company B of the 4th Battalion. He was primarily a cook, but he also helped gravel the Ledo Road. Despite the harsh, unfamiliar conditions in the CBI, Greene was known for his cooking: “I was one of the best cooks around.” He even found a way to make an apple pie so delicious that one of his officers told him, “Nobody can touch you.” Greene goes on to proudly describe his process, “They had them big five gallon cans of nougat–apple nougat. I’d soak em…cinnamon, nutmeg, yes sir, sugar.”

One aspect of CBI service that stood out to me was the threat posed by native wildlife. Corporal James W. Spencer was part of the 3301st Quartermaster Truck Company that followed the Ledo road as it was being built. In his interview, he recounts two different tiger attacks his battalion experienced and at one point says, quite nonchalantly, “I was almost attacked by a leopard one time.” Unfortunately, he doesn’t follow up with any more details about these incredible anecdotes! Private First Class Along with his run-ins with jackals, Louis Douglas of the 1327th Air Transport Unit recalled a close encounter with a tiger: “I was sitting in the tent, and the tents were close together, so close that the tent ropes crossed my path going to the ground. And the tiger was thumping on these ropes […] There was nothing between him and me but mosquito netting. I just kept real still, and he went on by. […] He did growl when he came by me, and it was so deep…”

Second Lieutenant Ira Pottard, one of the last living Buffalo Soldiers of the 9th Cavalry Regiment, also had plenty of run-ins with dangerous wildlife. His service was of a different kind, as part of a combat unit fighting the Japanese; whereas the majority of the U.S. soldiers in the CBI were not there for combat. Upon arriving, Pottard was first sent to Burma to defend the construction of the Ledo Road from the Japanese. He and his fellow soldiers were concerned not only with their own safety, but the safety of their horses and mules as well. They used mongooses to find and kill poisonous snakes, including cobras. “We slept in hammocks, because you couldn’t sleep on the ground–there’s too many things to get ya on the ground. […] See, you might wake up in the mornin’ [with] a python in your hammock with ya. If he’s in there with ya, you get your hunting knife and you start cuttin’–and you cut fast, because you only have a few seconds.”

Some of the men befriended “headhunters,” indigenous people living in the jungles of Burma, who helped the soldiers adapt to their surroundings. They were shown which fruit was safe to eat and which wasn’t, and how to use the monkeys as a guide–whichever trees they were eating out of were safe. Pottard was once invited to a dinner at an indigenous village by the “chief,” where he unknowingly ate a monkey. “It smelled good and everything–looked good. He didn’t tell me what it was until I ate it. […] After you eat the field rations so long, well, monkey tastes pretty good.” Additionally, Pottard and his regiment were so deep in the jungle that they didn’t learn of the war ending until two months after fighting had already ceased! It is hard to imagine being so fully cut off from the world, as I take for granted our constant access to news and loved ones through technology.

These stories are just a small glimpse into the sacrifices and hardships that African-American veterans of the CBI endured. I invite you to dig deeper into VHP’s collections to learn more about them!

Free to Use and Reuse: Wedding Pictures — Library of Congress