AFRICA: Why Angola is best suited to mediate Museveni – Kagame fall out 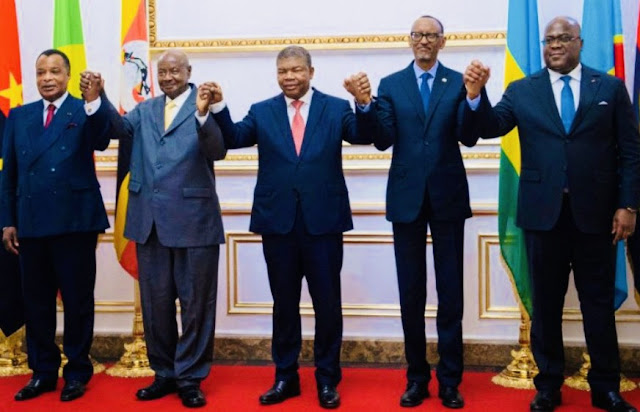 WHY ANGOLA IS BEST SUITED TO MEDIATE THE MUSEVENI – KAGAME FALLOUT

CHANGE OF GUARDS – Following the 1959 and early 1960s ugly events in Rwanda, many Banyarwanda Tutsi fled Rwanda to the neighbouring countries of Burundi, Tanzania, Uganda and Zaire (now DRC). In exile, the Tutsi embarked on plans to return to Rwanda through an armed struggle. One important weapon that contained their activities was the creation of a regional block called Economic Community of the Great Lakes countries ((CEPGL in French) that was comprised of Rwanda, Burundi and Zaire (DRC). Its core objective was to ensure safety of member states, creation and development of activities of public interest, promotion of cross border trade and movement of people and establishment of close cooperation in political, social and economic fields.

With its headquarters in Goma, CEPGL helped contain any form of potential political and social disharmony. It initiated mega economic projects that successfully benefited the three countries. That is how before Uganda’s Museveni came to power in 1986, the three CEPGL member states had no single external political threat. Museveni had made futile attempts to mobilize Congolese Tutsi in Eastern Zaire to help him establish bases there during his manoeuvres for his childhood ambition of becoming president of Uganda. In his appreciation for the strategic role of CEPGL, on the afternoon of 26th January, 1986 after he was sworn in as President, he flew to Goma to meet Zaire’s Mobutu and Rwanda’s Habyarimana.

In October 1990, the Banyarwanda Tutsi refugees whom Museveni had recruited into his NRA left to attack Rwanda. Courtesy of CEPGL, Zaire’s Mobutu militarily came to the aid of Rwanda but the Tutsi government of Burundi played a minimal role in the Tutsi led RPF invasion of Rwanda. However, the Banyarwanda Tutsi from Burundi and Congo stealthy joined hands with the RPF. The 1994 Rwanda Genocide and overthrow of the Hutu government in Rwanda by the RPF saw Hutu flee to Zaire in Millions. From exile, the defeated Hutu reorganised for a forceful return to Rwanda with the help of the host government. They even targeted Congolese Tutsi called Banyamulenge. The RPF government in Rwanda moved very fast to neutralize the threat. A Congolese exiled revolutionary, Laurent Kabila was facilitated to spearhead an armed uprising against the Mobutu government.

The Rwanda backed Laurent Kabila’s rebel swiftly overran a number of strategic places in eastern Zaire in 1996. The rebellion registered overwhelming support from the Congolese Banyamulenge. The militant exiled Banyarwanda Hutu in Congo were dispersed by the Kabila led rebel advance. The Burundi Hutu rebel FDD of Peter Nkurunziza bases were overrun and many fled to Tanzania. With some minimal help from Burundi, Angola, Eritrea and Uganda helped the Rwanda backed rebels to topple Mobutu in May 1997. Angola had been host to Zaire’s rebel group called Katanga Tigers that had been founded by Moise Tshombe from the former Katanga Gendarmes in the 1960s. They had fled to exile in Angola and even formed the elite corps of Angola’s MPLA. They had joined Kabila in his push against the Mobutu regime. Angola’s involvement was driven by the urge to neutralize its own UNITA rebels who had been enjoying bases in Zaire under Mobutu. Actually UNITA fought alongside Mubutu against the advancing Kabila rebellion.

The new rebel force under Kabila formed a new government that was heavily backed by Rwanda. The new rebel army in government was comprised of former Congolese soldiers who had crossed from the Mobutu regime, the Congolese Tutsi Banyamulenge, the dominant Rwandan army and small contingents from Burundi and Uganda. Rwanda”s army dominantly managed the new security order with its top Generals occupying top positions. Laurent Kabila moved very fast to rename Zaire as DRC before joining it to the Southern African Development Cooperation (SADC) regional block.

Amidst rumours of a Rwanda backed coup plot, in July 1998, Laurent Kabila ordered Rwandan soldiers to leave DRC and even went ahead to incite anti Banyarwanda sentiments that culminated in the general population targeting Tutsi more especially in Kinshasa and some places in South Kivu region. Rwanda complied with the withdraw but at that time DRC’s best elite force of 25,000 soldiers that was based in the eastern region declared a rebellions against Laurent Kabila. Rwanda led a plot by the new rebellion to carry out a commando raid on Kinshasa by airlifting troops to the western region near the border with Angola before advancing on Kinshasa. This suicidal mission was halted by Angola at the last minute. Kabila appealed to SADC for help and that is how in August 1998 Zimbabwe, Angola and Namibia sent their troops to his aide courtesy of the SADC’s Defence Pact on aggression.

In eastern DRC, the anti Kabila Rwanda backed rebellion registered the support of a number of ex Katangani Tigers who had earlier joined Kabila from exile in Angola. A faction led by Emile Ilunga and Jean Piere Ondekane joined the rebellion in Goma. On his part, Kabila also registered the help of remnants of the Burundan rebel FDD, the Rwandan Hutu rebels, the Ugandan fighters of former President Iddi Amin. The Kabila alliance launched a futile offensive in the east to retake Moba, Kalemie and Kibalo from the rebels. On August 23, 1998, the rebels overran Kisangani and Uganda reinforced it claiming that Khartoum could use it to supply the ADF rebels.
The rebel operation zones under the control of Rwanda ran from Rutshuru southwards to the border with Zambia while the one under Uganda ran from Butembo northwards to Isiro near the border with Sudan and from Businga towards Gbadolite at the border with CAR. During Uganda’s advance on Equatorial Province, it fought and defeated the Chadians at Gemena.

In September 1998, a fierce aerial bombardment by Angola and Zimbabwe to retake rebel positions in eastern DRC was halted. However, the Kabila alliance later lost the strategic and mineral rich Kindu but Zimbabwe fiercely halted Rwanda’s advance on the most strategic Mbuji Mayi in February 1999. At this stage, Angola faced a resurgence of UNITA rebel activities at home. UNITA had exploited the gap left by the deployment of three brigades in DRC in defence of Kabila. More Angolan soldiers were in Congo Brazzaville having gone there in October 1996 to help Gen. Denis Sassoue Ngweso take power from Pascal Lissuba who had been dealing with rebel UNITA. With its presence in DRC and Congo Brazzaville, Angola now controlled the Atlantic coast of the three countries.

Most worrying was the fact that this time round, UNITA had registered advanced weaponry and combat expertise. Angola suspected that it was Rwanda and Uganda that were helping UNITA. In December 1998 both countries denied working with UNITA but Kinshasha insisted that they had links with UNITA. Another concern for Angola was the presence within rebel ranks of a number of former Mobutu regime Generals who had been close to UNITA. In particular, Uganda backed rebel MLC under Bemba’s links to former Mobutu Generals who had supported UNITA was a cause for worry. However, Angola had respect for Emile Ilunga the President of RCD-Goma who had earlier been the head of the exiled Katangans in Angola and he convincingly distanced his group from UNITA.

By October 1998 Uganda and Rwanda were bickering over strategy and control of the rebellion. Rwanda went further by accusing Uganda of plundering DRC resources. The rebel RCD’s leadership had split into factions with Prof. Wamba Dia Wamba relocating to Kisangani from Goma thus the birth of the Uganda backed RCD-Kisangani and the Rwanda-backed RCD Goma. In March 1999, Banyamulenge soldiers with the rebel ranks detested the role of Rwanda’s army in South Kivu after accusing it of using them as a pretext for intervening in Congo affairs – a factor that isolated them from the rest of the Congolese. Some Banyamulenge soldiers opted to join the Uganda backed faction of the rebellion. Some Ugandan security personnel are alleged to have visited Uvira with a plan of opening up a front in South Kivu.

Kabila and his alliance were accused of helping armed groups fighting Rwanda, Burundi and Uganda on top of allying with Khartoum which was at proxy war with Uganda courtesy of LRA and ADF. Congo Brazzaville accused Kabila and his allies of supporting
armed dissidents under deposed President Pascal Lisuba’s former Prime Minister, Kotelas. In return, Congo Brazzaville’s Gen. Nguesso is said to have supported former Mobutu Generals to attack DRC from Brazzaville. UNITA amassed troops at the border with Namibia near Rundu threatening to attack if the later did not withdraw from DRC. Angola was also distrustful of the mediation efforts of Zambia’s President Chiluba owing to the earlier allegation that Angola had delivered in Zambia its weapon catches acquired from Togo – a factor that accounted for the 1997 alleged Angola backed coup attempt against President Chiluba.

By the time the protagonists in the Second Congo War entered a stalemate stage and eventual gradual withdraw, both Rwanda and Uganda had been courting Angola. Museveni in particular established regular contact with Angola’s Does Santos. Then CMI chief, Brig. Mayombo made several trips to Angola before his counterpart from Angola visited Uganda. Col. Kulaige, the then Army Spokesman led him on a tour of Queen Elizabeth National Park and resided at Mweya Lodeg. It is against Angola’s role in the Second Congo war that Museveni pushed for the creation of the International Conference on the Great Lakes Region (ICGLR). Headquartered in Bujumbura, ICGLR has a membership of 12 states – Uganda, Rwanda, Tanzania, Angola, DRC, Congo Brazzaville, Kenya, South Sudan, Sudan, Burundi and CAR. Seven other regional States are coopted – Botswana, Egypt, Ethiopia, Malawi, Mozambique, Namibia and Zambia.

ICGL has a Group of Friends and Special Envoys from the western donor community who provide financial, diplomatic, technical and political support. At its inception, it signed a pacts on security, stability and development. Among the ten pacts signed so far, is the Protocol on None aggression and Mutual Defence in the Great Lakes Region. It is under the ICGLR that Museveni has relied more in tackling the eastern DRC bases ADF rebels. He has pushed for and secured monitoring teams under ICGLR to be stationed inside eastern DRC and Kasese in Uganda. At the resurgence of their most recent fallout, both Kagame and Museveni rushed to Angola because like Uganda, Rwandan dissidents’ financial muscles have investments there. But more so, Museveni feared Kagame’s current closeness to DRC’s Tsekedi if supplemented by Angola’s Lorenco would make a dangerous alliance.

Museveni’s sole interest in regional blocks is to secure a nonaggression policy. His threat has always been from his western border thus DRC and Rwanda whereby EAC has a minor role to play. He found it fit to engage ICGLR and Angola in particular because the standoff fits into the its mandate while Angola has historically engaged with both Rwanda and Uganda more than any of the EAC member states. Moreover, the current President of Angola was a General in the army and the MPLA Secretary General when Angola was fighting Uganda and Rwanda in DRC over a decade ago. Congo Brazzaville’s Gen. Nguesso was a close ally of the Kabila alliance and in particular Angola during the Second Congo War. Save for Burundi and Rwanda who are interested parties in the standoff, non of the rest of the EAC members was directly involved in the Second Congo War from which the ongoing Museveni-Kagame bickering traces its origin (Kisangani fighting).