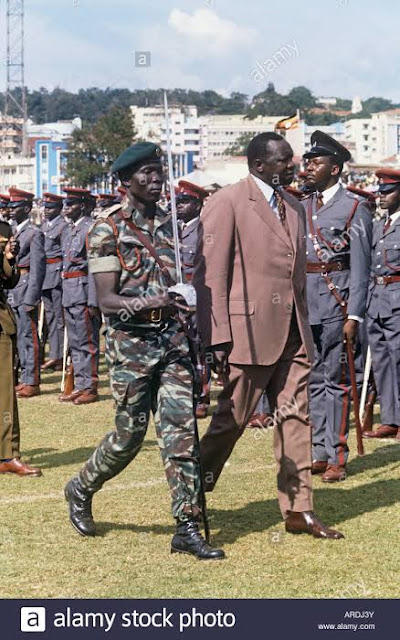 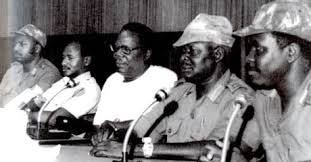 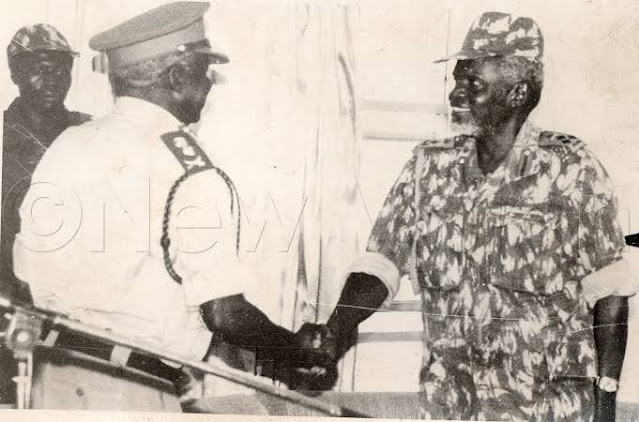 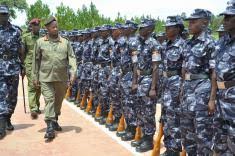 NOTE from the Editor: This post likely has minor errors which we will correct after the Pandamit. We are running very low on resources and had to lay off our assistant who used to read through most of work and correct errors. If you like what our team writes and you read, then why not help us financially? We all have rent, food, school fees and other living expenses to pay for as well as being on the Internet. You can help us by sending a gift of any amount via PayPal to mlnangalama@yahoo.com Please mark it is “Contribution to Change of Guards”. Thank you. MARTHA LEAH NANGALAMA (I am the Chief Editor & Publisher).

Upon the overthrow of Iddi Amin in April 1979, the Uganda Army (UA) was disbanded.  Majority of the UA personnel fled to Congo and Southern Sudan.  Others were tricked into surrendering before they were ferried and detained in Tanzania.  A few luck ones managed to hide within the country from where some of them found their way into the guerrilla armies that cropped up around 1980/1981.  Members of the dreaded State Research Bureau (SRB) and Public Safety Unit (PSU) just melted into thin air.  The Tanzanian army took charge of Uganda’s internal security and it’s territorial entergrity.  To bolster law enforcement, Tanzania sent in a contingent of 1,000 police personnel.  The post Iddi Amin UNLF government sent recruits to Tanzania for training as Officer Cadets and the likes of Katumba Wamala, Pecos Kutesa, Elly Tumwine, Namiti Kagat, Jeje Odong and others were part of that group.  Another batch of recruits were also sent to Tanzania to train as Police Officers and the likes of Jim Nuhweezi, Cossy Odomel, Ssejusa were among that group.   In the meantime, others including Paul Kagame  (President of Rwanda) underwent military Intelligence training at Arusha while the civil intelligence recruits were sent to Cuba for training.

While the Tanzanian army had continued training the UNLA, in 1980 the UK Foreign Office British Overseas Potical Advisor visited Uganda and upon return to the UK he submitted a confidential report that recommended restructuring of the police force.  An idea of a paramilitary force organized along military lines to handle riots and public order in general was floated.  A

British company, Falcon Star Co. Ltd run by an Ex SAS officer Jeremy Theleskis and Peter Merchand was contracted to train a 5,000 man Special Force of the Police.  By  September 1981, a total of 1,500 Special Forces personnel had been trained and  passed out. Since majority had been drawn from UPC strongholds of Teso and Lango courtesy of the Minister of State for Defence Peter otai, some sections of UNLA viewed the Special Force as an Obote army designed to counter the influence of the Acholi dominated UNLA.  During one of their inagural passout parade in the center of Kampala, the brick and yellow camouflage uniform clad were shot at by suspected resentful UNLA personnel leaving five of their personal dead.  The Acholi responded by creating a militia dubbed Not Yet Approved (NYA) that was mainly drawn from Kitgum.  In September 1982 the Special Forces actively participated in routing the Banyarwanda from some parts of south western Uganda back to Rwanda.

Around mid 1980 half of the Tanzanian army withdrew from Uganda and around mid 1982 it made a total withdraw from Uganda leaving behind only an 800 training team.  In May 1982 the government signed an MOU with the Commonwealth for the deployment of a Commonwealth Military Training Team (CMTT) to offer training to the UNLA.  The 36 man CMTT was comprised of personnel from the UK, Australia, Guyana, Serra Leone, Kenya, Tanzania and Canadians who provided the medical backup.  With the UK providing 19 of the total strength, it’s Col. Clevering took charge of the overall command and was deputised by Maj. Kanu from Sierra Leone.  The training program that ended in February 1984 provided training in parade drills, small unit tactics, leadership and battle operations to Non Commissioned Officers (NCOs).  The USA provided slots for senior army officers to attend staff and command courses in the USA and the likes of the infamous Col. Ogole did benefit.

Meanwhile in 1981 President Obote had visited North Korea where he signed a cooperation agreement in the field of economic, technical and cultural.  A 30 man contingent was despatched to Uganda to run projects and set up a military training program.  A military training camp run by the North Koreans was set up in Gulu.  It trained a special Crack Unit that gave the rebel NRA a hard time in the Luwero Triangle.  North Korea supplied sophisticated military equipments including the infamous multibarelled Katutsya.  It’s soldiers operated equipments again the NRA and infact three of them died in combat in the Luwero Triangle.

Upon the expiry of the tour of duty of the CMTT in February 1984, the government signed a military training agreement with the UK.  A 24 man British Military Training Team (BMTT) was send to Uganda and pitched camp at Jinja.   When the Okellos overthrew Obote and his UPC government in July 1985,  they put the 250 team of North  Korean military personnel under arrest and their detention ended in September when they were allowed to leave the country.  The UK’e BMTT suspended it’s training program at Jinja and by December 1985 only 7 of it’s personnel we’re still in Uganda.  During the Nairobi Peace Talks between Museveni’s NRA and the Okellos UNLA, the UK government attached Maj. Gen. Allard to it’s High Commission in Nairobi with the task of liaising with the belligerents for purposes of advising on what military assistance the UK could provide in the event of a successful settlement.

Immediately after Museveni took power in January 1986, he brought in a 30 man team of Tanzanian militay personnel to fill the gap left by BMTT which had totally left the country.  In January 1987 a small number of British military personnel under BMTT returned and resumed the training program at Jinja.  The Tanzanian Training Team left leaving behind a small number of advisors and trainers that managed basic and Cadet training programs.  In the meantime, some officer cadets and commissioned officers received training in Tanzania.  Libya’s Gadaffi who had been the major supplier of arms to Museveni’s rebel NRA continued supplying all sorts of sophisticated military equipments to the now NRA in government.  Libyan military advisors were despatched to Kampala while several NRA cadres were taken to Libya for mainly political indoctrination.  The then USSR supplied an assortment of sophisticated military equipments between 1986 and 1988.  It also offered military and political training to the NRA and the likes of Gen. Muntu and officers from ISO were in Moscow for that purpose.  Intelligence officer from both ISO and DMI received training in Cuba before 1989.  In 1987 Museveni invited back the North Koreans to come and train his NRA on the equipments they had earlier supplied to the UNLA.  They also conducted a military intelligence and VIP Protection training for the NRA at Kireka.  Since then, North Korea assumed the role of being the major supplier of security equipments to Museveni’s NRA and later the UPDF.  However, the USA was also providing slots to NRA personnel to train in the USA.