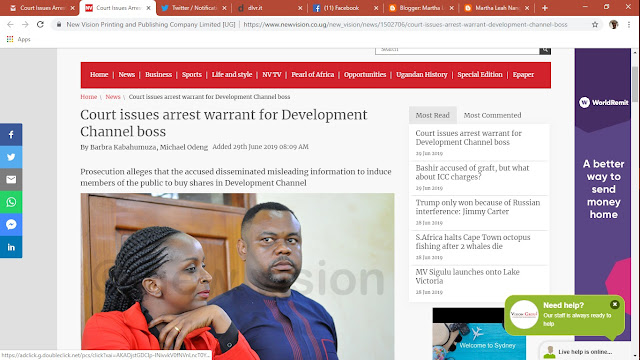 April 16, 2016 (SSB) — Though I still wonder why and how Charles Dukwe got a license for operation in South Sudan, I am only left with a call to deport the Nigeria corruption scandal master from South Sudan. I don’t know why our ministry of Justice would give license for illegal business which is of nonexistence in the law, however I want Dukwe deported as per the time.

The most dangerous, corrupt, and money laundry master Charles Dukwe of Nigeria is in South Sudan with a fake business and promising his employees at his office located at Airport Road in Juba to get millions of pounds every year. Dukwe’s issue was brought to my attention by nearly ten lawyers whom he contracted initially for his business in South Sudan but turned the offer down given the business bad intention and illegality thereof.

The learned young lawyers who graduated from the University of Juba’s School of Law last year (2015) are calling on the country’s government to consider deporting Charles Dukwe à part of the Nigeria corruption scandal currently being investigated and addressed by President Muhammad Buhari.

Charles Dukwe has opened a laundry in the name of United Collision for Africa UCA Company in Juba-South Sudan where he came into contact and contracted with the lawyers.

The lawyers abandoned Dukwe’s signed contract of employment and resigned altogether with the exception of other two whom I cannot mention for their personal reputation.

The resignation of the learned intelligent young lawyers came after they have made a thorough research about and having the understanding of Dukwe’s personality and the business he is operating in Juba-South Sudan.

I was disturbed when I press a Google search with “who is Charles Dukwe” and alot of scandal cases and cheating were the results of my search, when I was in the orientation training by Mr. Dukwe at the Eastern Pearl Plaza along the Juba International Airport Road, I couldn’t even wait I resigned immediately and my colleagues followed me after discovering Charles Dukwe Laundry business in the countries he had operations in, and across the Continent of Africa. Said lawyer; Akot.

Dukwe became mad and sad when almost all of us resigned and asked us to abandon our decision but we are lawyers we cannot operate a money laundry business. Mr. Akot explained.

And very supervising, Charles Dukwe refuted our research information about his case with Nigerian president Muhammad Buhari and said, I don’t care about President Buhari, who is he? Garang Akot said it to me as a second hand information.

According to the learned young lawyers, Charles Dukwe of Nigeria has told them that; even President Kiir is useless to him and that he is capable of turning the people of South Sudan against their government. This is why I term Charles Dukwe as a national security threat and if he is able to confuse and embezzle millions of naira in Nigeria and has said it clear that each of his employees shall get a remuneration of about SSP 2 millions in a year, where is he going to get all these money? To me, it is either a laundry or a scandal of embezzlement of public funds in South Sudan.

President Salva Kiir Mayardit is our Honour, we cannot allow a foreigner like Charles Dukwe to term him as he said Useless and then allowed to loot our people with his fake ideas.

These young gentlemen are of a rare type of patriots with a huge love to this Country, I urge our National security to critically analyses and deport Charles Dukwe back to his Nigeria. He is a threat as he communicated it clearly that he can turn people of south Sudan against the government because he is intelligent and wealthy.

This country doesn’t need the likes of Dukwe or even his laundry business, we have enough corrupt people, there’s no need to import a corrupt from abroad.

To shine a light on Dukwe, I am honored to call for his deportation following the terrible background in Nigeria and other countries in the continent as below; New Nation, owned by Dukwe to collect money from Nigerians but the company is not real as revealed by Nigerian wires. Women in Oil owned by Dukwe and used to collect money from the government in Nigeria in the name of poor women living in oil production areas, and at last UCA which he uses to collect money fraudulently from even South Sudanese citizen and soon government if he is not forced to leave the country.

To confirm, I urge our security service to login to Google search with the name of so called Charles Dukwe and there you will be satisfied. lastly, I would want to thank our security service “NSS” for their unique role charged for thereof, it is the duty of our security to inspect and know the identity of foreign entry to our state as well as to why they are coming and their background in the former country of residence.

Charles Dukwe was refused operation in Kenya according to Kenya law society web page for the year 2016. Dukwe stay in South Sudan is a national security threat, we need to get rid of him early before he does.

I Reech Malual-Akumric accept to stand tall and brave till Charles Dukwe is deported to his Nigeria.

The writer, a Media Legal Consultant for Homeland International Recruitment And Consultancy Agency (HIRACA), is reachable at rmalual@gmail.com /@MalualReech/+211955660611

UGANDA: All scams running in Kampala are by govt or endorsed by govt