The things of K vs K must not be taken lightly. LONG READ.  Let me show you what I just got from Kampala.  After which is what my team published sometime ago about the Kaguta vs Kagame issue.

I notice that many Ugandan journalists are acting as propagandists against Rwanda.  I am no fan of Kagame but give him some credit.  He used to be the Minister of Defence in Uganda and one time he was in charge of Intelligence.  You think he does not know what he is doing?  That is Tupid.

I know for a fact that President Paul Kagame will win this war.  For a FACT.

Rwanda has for the second time closed its Katuna/Gatuna border with Uganda, 12 days after it was re-opened.

Rwanda Revenue Authority [RRA] had said it would allow heavy trucks to cross temporarily as a trial which came to its close on Saturday June 22.

The border was first closed in February this year on pretext of repairs.

Uganda Radio Network [URN] reports that even with the temporary opening, some traders found it difficult crossing the border and fewer trucks were allowed to go through.

The Katuna border weekly market known as “World Market” inside Uganda was poorly attended and there was remarkable absence of Rwandans, usually the major customers.

On June 19, Uganda Revenue Authority (URA) installed a mobile cargo scanner at Katuna Border post to ensure there are no illegal declarations.

Rwandans are still not allowed to cross to Uganda. Ugandan traders were advised to use the Cyanika and Kagitumba border posts to go to Rwanda.

Kampala has lost more than $664 million’s worth of exports to Rwanda while Kigali has lost $104 million during the three months the Gatuna border has been closed, according to Uganda’s East African Community Ministry. 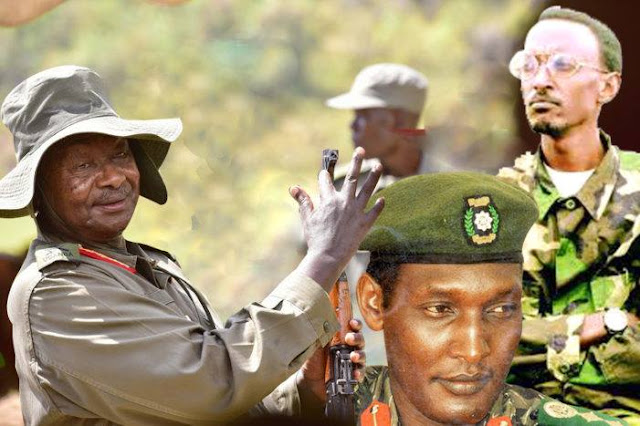 THE COMPLEXITY OF THE FRESH MUSEVENI/KAGAME FALL OUT

The two military dictators are reigning over the two countries that have deep rooted historical ties. Apart from the Banyarwanda immigrants of the early last century, the early 1960s witnessed Banyarwanda flock refugees into Uganda. Museveni and Kagame belong to the former and later categories respectively. Both the immigrant and refugee Banyarwanda played a key role in shaping of the post independence Uganda politics. In the search for an opportunity to forcefully regain their lost power in Rwanda, the Banyarwanda lost no opportunity in positioning themselves in Uganda’s political life. Post independence regimes also exploited them for their own survival.

The Banyarwanda were active in sustaining the Iddi Amin regime security apparatus, Museveni also lured a number of them into his anti-Iddi Amin armed struggles. He had lured a few Banyarwanda combatants like the late Gen. Rwigyema into his Tanzania based FRONASA. Around 1978/79 even when the invading Tanzanian troops crossed the border into Uganda, Museveni embarked on swelling his numbers by recruiting Banyarwanda refugees from camps in Mbarara. In late 1979 when some identifiable Banyarwanda were eliminated from the new post Iddi Amin national army, Museveni retained them as his private army. When he took to fighting in 1981, these Banyarwanda formed the nucleus of his rebel army, the NRA.

It is against this background that the then UPC government moved to restrict the freedoms of Banyarwanda refugees – an act that was construed as systematic targeting of Banyarwanda. When Museveni took over government in 1986, Banyarwanda occupied dominant positions in the military. Very soon it was to become a source of friction within the security circles. Museveni had much earlier enacted an anti – sectarianism law specifically to address the Banyarwanda issue. The 1990 invasion of Rwanda by the Banyarwanda in the NRA brought some temporary relief. When the Tutsi RPA took power in 1994, thousands of Banyarwanda from Uganda returned to Rwanda but still more opted to stay in Uganda. Haunted by his own unclear origin, Museveni granted a blanket citizenship to all Banyarwanda through the 1995 constitution.

When it came to invading Congo in the late 1990s, Museveni and Kagame worked closely. In the same vein, they identified another group of Banyarwanda immigrants in Congo dubbed Banyamulenge whom they claimed to protect against a potential genocide. Owing to bickering of political influence and economic benefits in the Congo, their two armies had three rounds of bloody clashes in Kisangani.

The two leaders shifted the conflict to their two capitals, Kigali and Kampala. Kampala accused Kigali of backing its political opponents during the hotly contested 2011 presidential elections. Kigali accused Kampala of backing its dissident groups. The two capitals hosted fleeing political leaders and military officers from their respective countries. The shadowy PRA rebel group linked to the opposition leader, Dr. Besigye came into play. Kigali hosted renegade Cols Mande, Kyakabale and others. Liikewise, Kampala on the other had hosted and facilitated hostilities by the Rwandese dissidents like Maj. Alphonse Fuluma and Maj. Mupende. Museveni tasked Gen. Kaziini to prepare for an invasion of Rwanda as the latter assembled the so-called PRA in Eastern Congo. It was through the intervention of the then UK Foreign Secretary, Claire Short that a full-scale military confrontation was averted. In Congo’s Ituri, it was the efforts of Gen. Kalekyezi who basing on ethnic considerations managed to lure war lord Gen. Ntaganda to turn against the Kigali backed UPC thus a heavy blow on PRA bases in areas of Mongualo in Ituri.

PRA was suppressed, dissidents were relocated by the UN from the respective capitals (from Kampala to the USA and from Kigali to Sweden), a joint verification mechanisms put in place but low intensity hostilities persisted. This is what gave rise to a series of the infamous espionage allegations by Rwanda of the early 2000s. It was Museveni’s appointment of the Banyarwanda in the names of Gen. Aronda and Gen. Kalekyezi as Army and Police chief respectively that helped resolve the animosity between the two countries. With time hostilities ceased and normal relations were restored. Museveni had never wanted Kagame to take over the reigns of power in Kigali in preference for a maintenance of a majority Hutu political leadership under deposed figurehead former President Pasteur Bizimungu who would worship Kampala.

While Uganda’s political opposition and dissidents lost touch with Kigali, a new wave of Tutsi dissidents from Kigali in the names of Gen. Kayumba, Col. Karegyeya and others sought to link with Kampala. Among other key players in the Museveni regime circles, Gen. Saleh was very close to Col. Karegyeya. The assassination of Col. Karegyeya who had been the most outstanding threat against Kigali, put a lull in the Uganda linked anti-Kagame campaign. While Museveni went into slumber, on his part Kagame instead embarked on building strategic allies within Museveni’s political and security apparatus. This gave rise to the robust Rwanda controlled intelligence network inside Uganda under the patronage of the police chief, Gen. Kalekyezi. That is how the Uganda police was able to have those fleeing Rwanda to Uganda killed, kidnapped and forcefully returned to Rwanda. Any attempts by the dissident RNC to link with Kampala is closely monitored by Kigali courtesy of the Gen. Kalekyezi led spy network.

In their (Hima/Tutsi) power struggle between the security Minister, Gen. Tumukunde and Gen. Kalekyezi, Museveni had initially opted to ignore but the alleged Rwanda backed political ambitions by Kalekyezi woke him up. Mindful of the delicate and complex network that has already been put in place, Museveni is cautiously moving to neutralize Gen. Kalekyezi’s Rwanda sponsored spy network. Museveni also fears that a more direct and prompt action against Gen. Kalekyezi can send a bad message to the wider community of regime cohorts. Gen. Kalekyezi has played a leading role in creating a regime police force whose sole mandate is to suppress political dissent, neutralize opposition, ensure a Museveni “win” during general elections. Also, such a network if not cautiously dismantled can lead to more collateral damage. Much as the alleged links of dissident RNC activities with in Museveni may seem speculative, the facts on the ground could be different. The most recent publicised interception by police of truckloads of dissident RNC Banyarwanda headed for Congo via Tanzania and Burundi is one such live example. The alleged theft of sensitive files from ISO by the head of ICT, a one Kanzira (which is a Kinyarwanda version of Kamuhanda) further demonstrates the complexity of the issue. Every move to distablize Kagame by Museveni is closely monitored.

Other than the Gen. Kalekyezi led robust spy network, Museveni seems to be enjoying a political upper hand. Unlike the initial post Kisangani conflict of the early 2000s where both countries harboured each others’ dissidents, this time round there is no Ugandan opposition political entity that is linked to Kigali. The resurgence of the Museveni/Kagame conflict comes at a time when there is a more widespread general animosity by Ugandans towards Banyarwanda because of their perceived close association with the parasitic and oppressive Museveni regime. Therefore, any opportunistic Ugandan political opposition that may seek to exploit the ongoing bickering by seeking the backing of Kigali risks loosing out on the wider Ugandan population. May be Kigali may be looking forward to backing the much anticipated Third Force under Gen. Mugisha Muntu but he also knows more than anybody else how suicidal such a move would prove. By shunning Kigali’s sponsorship to any credible opposition political force in Uganda and more so given the fact that the choice of Gen. Kalekyezi is not acceptable in Uganda’s polarized political environment, the desperate Kigali may have assassination as the only remedy.

By taking custody of the defeated Tutsi Banyamulenge M23 rebels, Museveni had scored highly in as far as security influence in Congo’s South Kivu is concerned. The ongoing infiltration of former M23 fighters into South Kivu by way of alleged escapes from Uganda coupled by the alleged scheme to set up proxy RNC bases in the Banyamulenge strongholds of Minembwe is not a coincidence. The Banyamulenge through their M23 are motivated by preservation of identity in the Congo and to them what matters is anyone who is willing to offer backing; Museveni is currently in the driver’s seat. However, owing to economic considerations, both Rwanda and the Banyarwanda in Uganda and elsewhere don’t wish to see political events that will lead to Banyarwanda being forcefully returned to Rwanda. In as much as the Banyarwanda of Uganda cherish Museveni’s patronage and so much prefer to stay in Uganda, they owe their allegiance to Rwanda. Whatever course of action that Kigali chooses to counter Museveni’s links with RNC, the stakes of Banyarwanda in Uganda matters. The initial bickering of the early 2000s saw Kigali backing a semblance of a structured Uganda political opposition with a tag armed wing in the form of the shadowy PRA while Uganda only had a handful of Rwandese dissidents holed up in urban Safe Houses. This time its is the opposite and owing to the factors outlined above it may not be easy for Kigali to host dissident Ugandans.