The UN migration agency says it hopes to repatriate another 1,968 Ethiopian migrants who are being detained under horrific conditions in a sports stadium in the Yemeni port city of Aden.

Yesterday, 124 Ethiopian Migrant departed Aden Airport as part of IOM’s Voluntary Humanitarian Return.This is the first batch of migrants currently being detained in 22 May Stadium in Aden. pic.twitter.com/AB5JFleCKF
38
8:06 AM – May 29, 2019
Twitter Ads info and privacy 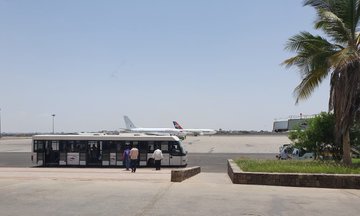 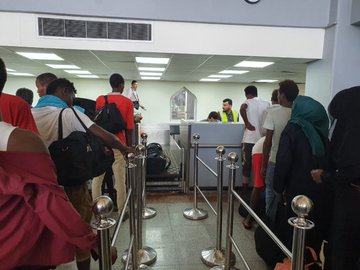 16 people are talking about this
But the operation, which was to have begun last Saturday got off to a late start. And this says IOM spokeswoman, Angela Wells, might pose a problem.

“The operation was only cleared for eight days. So, because it was delayed, we are now waiting to see if we can continue it past that date, ” she said. “We will do our best to work with the authorities to find sustainable solutions and start another round of VHR (Voluntary Humanitarian Returns) and to help people where we can.”

With the approval of the Saudi-led coalition and Government of Yemen, 347 migrants have been flown home on three IOM chartered flights this past week. Wells says women and children were among the first to be repatriated as they are seen to be the most vulnerable.

At the end of April, Yemeni authorities rounded up more than 2,000 irregular migrants in Aden, most Ethiopians. They are among an estimated 150,000 migrants who have made the arduous journey to war-torn Yemen in hopes of finding work and a better life in neighboring Saudi Arabia.

Wells tells VOA the migrants are being held under appalling, life-threatening conditions in Aden’s Al Mansoura Football Stadium. She says delays in repatriating the migrants are likely to result in more suffering and more deaths.

“Already eight people have died from acute watery diarrhea and one migrant was shot by a guard. So, the result if we are not able to get everyone out that we can could be quite catastrophic. And, so that is why we are urging the authorities to work with us and help us get as many people home as possible,” Wells said.

In the meantime, IOM reports Yemeni authorities are continuing to round up more migrants and bring them to the sport stadium. It warns the growing number of people being detained under sub-standard conditions is worsening an already acute humanitarian situation.