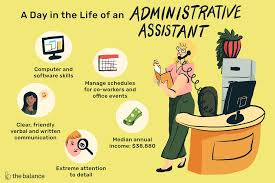 Rita Maxwell had no idea she was about to lose the job she’d had for nearly 20 years when her boss told her to meet him in the conference room at the end of the work day.

In a short conversation, Maxwell’s longtime boss, the head of an executive search firm in Northern Virginia, informed her that he no longer needed an executive assistant because he could handle his own scheduling, errands and phone calls. He offered her a few weeks of severance pay and said he would stay late while she packed her belongings.

“I was completely taken aback when he called me into the meeting room to let me know my position had been eliminated,” said Maxwell, who was let go in early 2017. “There’s just not a lot of loyalty anymore.”

The United States has shed more than 2.1 million administrative and office support jobs since 2000, Labor Department data shows, eroding what for decades had been a reliable path to the middle class for women without college degrees.

The job losses affecting administrative assistants, bookkeepers, clerks, data entry specialists, executive assistants and secretaries have largely continued even as the economy recovered from the Great Recession, suggesting these jobs aren’t coming back.

Employment in administrative support positions has fallen to 1986 levels, and the Labor Department predicts that secretaries and administrative assistants will see the largest job losses of any occupation in the coming decade.

Since her layoff, Maxwell has only been able to land temporary jobs that pay $13 to $16 an hour — about a third of the roughly $80,000 annual salary she made in her final years at the search firm. Retraining did not seem like a realistic option in her mid-60s, she said.

A lot of companies simply “ghost” her, Maxwell said, not calling or emailing to let her know the outcome even after she came in for a final-round interview. She has run down her savings and dipped into her retirement fund to pay the mortgage on the bungalow house in Manassas that she purchased in 2011. If she can’t land a full-time job by the spring, she said, she’ll have to put her home up for sale.

“I was part of the women’s lib generation. I was proud I was able to support myself and not have to depend on somebody else to keep a roof over my head,” Maxwell said. “But what in the world am I going to do if I don’t land somewhere?”

The U.S. unemployment rate is 3.6 percent, a half-century low, and there are more job openings than unemployed Americans. Technology has created more positions than it has destroyed, economists say. But although the nation is likely to have many jobs for years to come, it’s less clear whether they will be well-paid jobs.

On the presidential campaign trail, the conversation has focused mainly on the plight of workers losing manufacturing jobs (and potentially truck-driving jobs) to automation or trade. Most of those workers are male. Almost no attention has been paid to the upheaval that women in administrative positions are facing, said Martha Gimbel, a labor economist and former research director for the Hiring Lab, even though the scale of job losses is not far off from what occurred in blue-collar sectors.

“If you think about the amount of emotional energy we’ve devoted to what the future of truck drivers is as opposed to the future of administrative assistants, it’s mind-boggling,” Gimbel said. “We’re so focused on jobs that men do that we allow the suffering of women in this area to be silent.”

The nation has shed 2.9 million production jobs since 2000, according to Labor Department data. (Although manufacturing has lost even more than that, other jobs in welding and specialized computer operation have grown.)

Administrative positions have been lost to automation and outsourcing. Nearly 20 percent of administrative assistants have moved into something else entirely, such as sales or customer service roles, job site LinkedIn found.

“Up to about five years ago, the trend was to replace administrative work with cheaper labor in India or the Philippines,” said Phil Fersht, head of HFS Research, which works with clients on automation strategies.

“The new trend is to actually replace administrative work with robotic software,” he said. “I saw a bank in Brazil recently replace 600 staff with basically a chatbot.”

But a third threat is also at play: upskilling. Companies increasingly want a college degree for administrative positions, recruiters say, making it even harder for those who are laid off to land one of the roughly 18 million remaining administrative jobs.

“For non-college-educated workers, the landscape of opportunity is contracting and narrowing,” said David Autor, an MIT economist whose research found that workers without college degrees face about as tough of a time in cities as they do in rural areas. “We have tons of jobs for lesser-educated adults, but we have very few good careers.”

Among the 10 jobs expected to add the most employees in the next decade, six pay less than $27,000 a year. Jobs are growing at the high end and low end, a “barbell” economy.

The changes are falling especially hard on women over 50.

The Trump vs. Obama economy — in 15 charts

Elizabeth Espenshade, from Elizabethtown, Pa., walked right into an administrative assistant job at a steel company after graduating from high school in 1975, believing, like many factory workers, that it would last a lifetime.

When steel ran into trouble in the 1980s, she was laid off but transitioned to a job in state government. She worked for three decades as an executive assistant at the Pennsylvania auditor general’s office until she was let go in 2013 at age 57 because of budget cutbacks.

Since the layoff, she has found jobs, but none have paid even half of the $29 an hour she earned in her final years in state government.

“I think technology is taking over everything. It’s taken away a lot of our work,” Espenshade said. “I needed three more years to get full retirement, but I was pushed out the door.”

Espenshade initially fell back on a side job that she’d had for many years, doing data entry in a trucking company’s billing department. But that role was outsourced to India in 2016.

Today, Espenshade works part time at a nonprofit drug and alcohol counseling service. She said she enjoys the work, but it pays $13 an hour, complicating her hope of retiring soon. Staff at PA CareerLink, a government job center, urged her to retrain for a new career, but she didn’t think that was practical given her age.

UGANDA: Advice to new graduates and soon to be unemployed

Want create site? Find Free WordPress Themes and plugins. I am responding to a tweetRead More

JOBS: Quartz Africa is hiring an EAC Nairobi based Correspondent, other jobs available