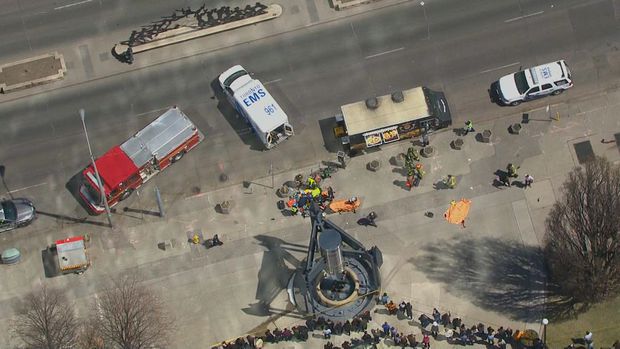 Aerial screen capture from video of an incident involving a van striking several pedestrians in Toronto’s Yonge and Finch.

CTV NEWS – Nine people are dead, and sixteen more are injured, many critically, after a rental van mowed down pedestrians for close to three kilometers in North York Monday afternoon.

Aerial footage from the scene showed victims on the sidewalk covered with orange tarps, as police taped off the surrounding blocks. The Globe and Mail has not confirmed the number of people dead at the scene. Sunnybrook Hospital has confirmed one person has died in hospital.

Michele Kelman, who works at an IT company with an office on Yonge St., said she was walking back to work after lunch with a friend when they heard screams behind them.

Ms. Kelman said she turned and saw objects and bodies flying through the air and the front end of a white van heading straight down the sidewalk toward her.

She turned instinctively, trying to shield herself, and the truck rushed past without touching her.

When she turned back she saw only carnage. “My friend was gone,” she said. “I couldn’t find her body for a while. There were a few around. And there were people trying to bring her back.”

Ms. Kelman said she her friend did not survive. She declined to identify her because her family hasn’t yet been notified.

“The numbers are just starting to come in,” he said.

“It’s unprecedented. We’ve never seen anything like this in Toronto up until now…we never thought this would happen here…it’s a level of surreal…you go in and treat each patient with an individual focus, then you move to the next one.”

“This is not something we’ve seen in the city of Toronto.”

The white van, which had a Ryder Truck Rental and Leasing logo on its side, fled the area, making it roughly three kilometers before being stopped on the sidewalk near Poyntz Avenue. It had severe front-end damage.

Police have not released any information about the cause of the crash. The driver is reportedly in custody. 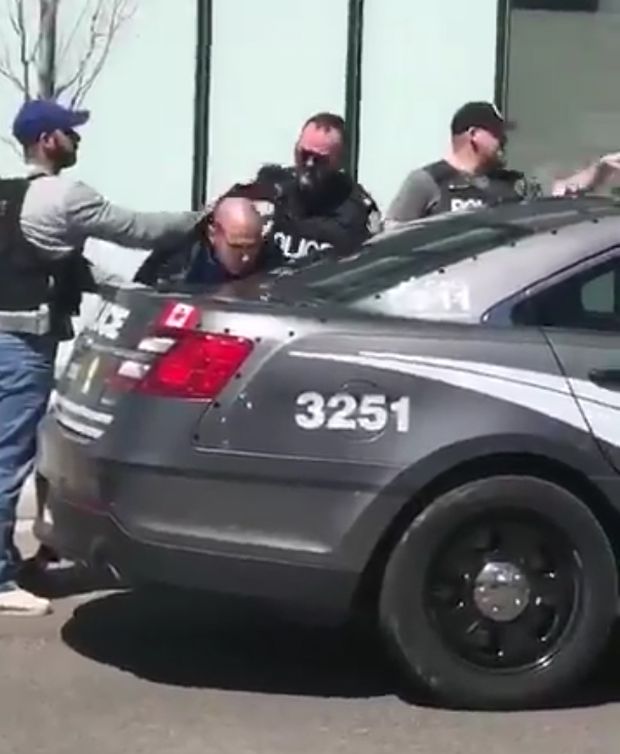 The driver of the van was taken into custody after he got out of the vehicle and pointed what appeared to be a handgun at a police officer, according to an witness and videos posted on Twitter.

Amir Farokhpour was steps away when one of the victims was hit Monday. He had just walked out of the furniture store where he works, heading for lunch, when he “heard a bang.”

He looked up to see a southbound van veering wildly in the northbound lanes. In its wake was a middle-aged man, his head covered in blood. The driver appeared to be aiming for two women on the sidewalk, he said, but didn’t mount the curb and swerved back across the road and continuing south.

“We tried helping the guy, but he was dead right away,” Mr. Farokhpour said. As he told the story the victim lay nearby under a tarp, a shoe and other debris several metres away. 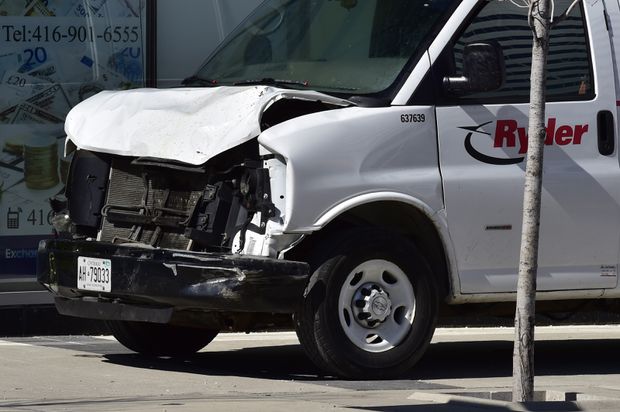 A van with a damaged front-end is shown on a sidewalk after a van mounted a sidewalk crashing into a number of pedestrians in Toronto on Monday, April 23, 2018.

Another witness said he saw the van a few blocks farther south. Andy Jibb, a web designer who works from his home 27 storeys above Yonge, heard crashes and screaming.

He raced out onto the balcony and saw “five or six” people lying on the sidewalk. “Three of them weren’t moving at all,” he said

As Mr. Jibb watched, the van proceeded south down the sidewalk as people scrambled out of the way before disappearing from view.

“I saw people chasing the van and people rushing to the people on the ground,” he said.

One witness, named Ali, told reporters that when he saw the van veer onto the sidewalk he thought the driver of the van had a heart attack.

But then he realized the van, which he estimated was going at speed of up to 70 kilometres per hour, was intentionally hitting people.

“People were getting hit, one after the other,” a tearful Ali said.

He saw a stroller fly in the air. There were also elderly victims because there is a retirement home nearby, he said. As soon as he could stop, he called his father, who often went for strolls in the area, to make sure he wasn’t among the victims.

Another witness, Wisam — who asked that only his first name to be used — had just left the Whole Foods store at Yonge and Sheppard with a colleague, when they noticed the sound of cars honking and emergency vehicle sirens.

They stopped on the sidewalk and saw, from across the street, a white van with a “Ryder” logo on it driving along the sidewalk towards Yonge Street.

“You could see the face of the van was already smashed. There was no grill. I think there were no lights either,” he said.

“There was a squeaking noise,” coming from the van, he said. “Maybe the squeaking of the tires, or from the engine.”

Instead of stopping at Yonge, the driver of the van continued along the sidewalk, cutting the corner in front of a Tim Hortons, and crashing through a bench and a Green P sign. “The bench on the street was completely bent backwards,” he said.

The van continued along the sidewalk down Yonge, eventually turning right onto Poyntz Avenue.

Wisam and his colleague followed, and by the time they arrived at the intersection of Yonge and Poyntz, they saw the van parked on the sidewalk. A man was laying on the sidewalk directly outside of the van, pinned down by police officers.

At the time, Wisam had no idea what he had just witnessed. He assumed it had been an ordinary hit-and-run. “I was like, ’This is Hollywood … We just thought it was some idiot running away from a hit and run.”

The busy area was chaotic as police attempted to tape off the surrounding streets. TTC service in the area has been suspended.

Bryan Jenkins was on his way home from work, coming out of the subway as the chaos began. “It was chaos, people screaming everywhere. Like people were hysterical, you know,” he said.

Dozens of police cruisers had flooded the area by 3 p.m., and an EMS bus has been brought in along with multiple ambulances to treat victims.

Seven patients were transported from the scene to the trauma centre at Sunnybrook Health Sciences Centre, the hospital said in a statement.

Different videos posted to Twitter show a man being arrested in possible relation to an incident where a van mowed down pedestrians in Toronto’s north.

Staff were meeting Monday afternoon to make sure there are enough beds available for the injured.

Traffic is being “controlled” outside the hospital’s main campus on Bayview Avenue.

Sheldon Taerk happened to be at the hospital for an unrelated matter when the victims started arriving. Outside the hospital, he described how hard the staff were working to revive victims.

“They’re all working so hard in there,” he said tearfully.

In Ontario, potential acts of terrorism are investigated by RCMP-led national-security squads. “At this point we are still gathering information on the incident and once we have the ability to do a press release we will do so,” RCMP said Inspector Don Halina, of the Ontario Integrated National Security Enforcement Team. ​

Word of the incident came just as Mayor John Tory was speaking to a business luncheon in Scarborough.

“There has been in the Yonge and Finch area a very tragic episode that’s occurred involving a number of pedestrians and a vehicle,” Mr. Tory said, just minutes after the first reports came in. “I won’t speculate this moment in time how many people have been directly affected but it’s multiple people … I will just say at the outset that of course our prayers and our thoughts are with the people that have been affected by this, the pedestrians in particular. And with our emergency responders … At the moment we have no knowledge of exactly how this came about or what lay behind it.”

Dozens of police cruisers have flooded the area, and an EMS bus has been brought in along with multiple ambulances to treat victims. At least eight ambulances have reportedly transported patients to Sunnybrook Hospital.

Prime Minister Justin Trudeau told the House of Commons that “our hearts go out to anyone effected. We will have more to learn and more to say in the coming hours.”

The busy area was chaotic as police attempted to tape off the surrounding streets. TTC service in the area has been suspended.

Police have not released any information about a potential cause of the crash.

Canada has had other recent attacks involving vehicles.

Last September in Edmonton, an assailant stabbed a police officer and struck four others in a rental van outside a football game. No one died. Abdulahi Hasan Sharif, 30, has been found fit to stand trial on 11 charges including attempted murder.

The deadliest vehicle-ramming attacks have taken place in the United States and Europe since Al Qaeda’s 2006 call for Western recruits to use trucks as weapons, and after ISIS renewed the call in 2014 for lone wolves to improvise weaponry. The van came to rest on Poyntz Ave

THE GLOBE AND MAIL, SOURCE: TILEZEN;