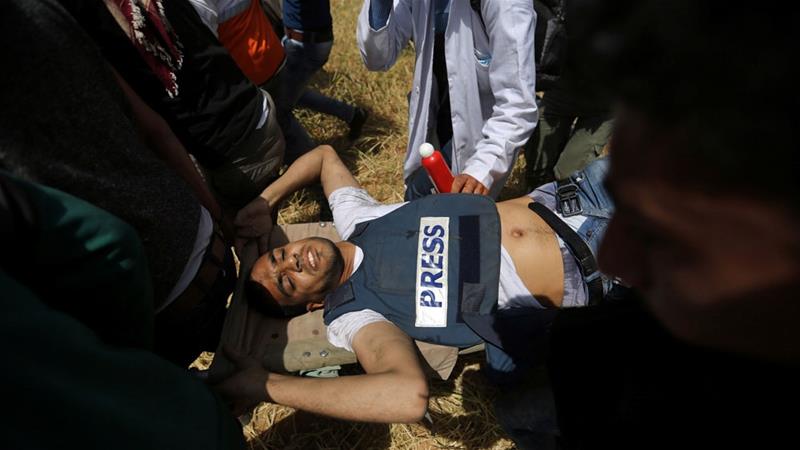 AL JAZEERA – A press advocacy employee has been sacked following his condemnation of Israel’s lethal force used against Palestinians.


A Canadian press-freedom group has come under fire after the sacking of one of its employees who published a statement condemning the “extrajudicial killings” of Palestinian demonstrators by Israeli forces in Gaza.

At least 17 Palestinians were killed by Israeli live fire and more than 1,000 others were wounded, as thousands rallied to mark the 42nd anniversary of Land Day on March 30. Among those injured were at least 10 journalists.

On April 2, Kevin Metcalf, communications coordinator for the Canadian Journalists for Free Expression (CJFE), wrote a statement on behalf of the group urging the government of Canada to condemn the “IDF’s [Israeli Defence Forces] brutality”.

Failure to do so, he wrote, “will undermine Canada’s moral authority when condemning similar acts by any other nation-state. Targeted attacks against demonstrators and journalists must be condemned wherever they occur”.

Canada regularly issues statements denouncing violence that occurs worldwide – most recently, it condemned the reported chemical attack in Syria’s Eastern Ghouta. However, the Canadian government has remained silent regarding the killing of unarmed Palestinian protesters.

Metcalf’s statement was attacked by critics who accused the CJFE of lacking neutrality, taking a position in the conflict and pushing for “anti-Israel policy”. 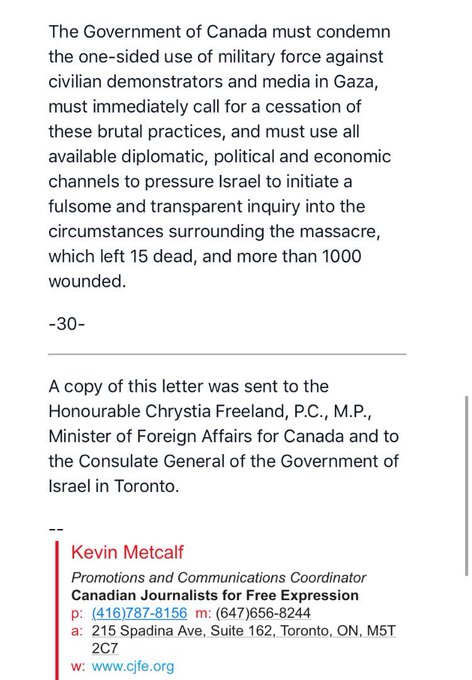 Am I the only one disturbed that an organization called Canadian Journalists for Free expression is lobbying the Canadian government to take a specific position on Israel? Does @CJFE realize how such politicking can damage our reputation, and thus freedom?

Meanwhile, as the Friday protests in Gaza continued, another 15 Palestinians were killed and a total of 1,600 were wounded, including seven journalists.

On April 8, a day after Palestinian photographer Yaser Murtaja died of his wounds after being shot by an Israeli sniper while wearing a jacket clearly marked with the word “PRESS” on it, CJFE removed their statement and Metcalf was notified of his termination.

“It was made very clear to me that they weren’t going to keep me on [employed] as a result of having published the statement,” Metcalf told Al Jazeera.

On April 11, the CJFE explained in a revised statement that it decided to remove the text written by Metcalf because it “went beyond the organisation’s mandate” and was “overreaching”.

When asked to clarify what was particularly problematic, Tom Henheffer, vice president of CJFE, said: “The core message wasn’t wrong, but it was too broad in focus and incorrect in tone, easily leaving it open to misinterpretation (which led to the controversy online over the last couple of weeks).

“Our new statement still condemns the IDF [Israeli army] action, calls for an impartial investigation, and asks the Canadian government to call for the same, but does so in a more precise way that better aligns with our core mandate,” Henheffer wrote in an email to Al Jazeera.

Metcalf said he did not expect such controversy to arise, given the fact that the CJFE has regularly condemned suppression of speech and journalism worldwide, including in countries such as China, Croatia, Iran and Russia.

“Writing and publishing statements and protest letters is what is expected of me as per my job description. It is clear that I am being punished for doing my job,” Metcalf wrote in a Facebook post on April 9.

Independent Jewish Voices Canada (IJV) also said that they were “deeply concerned” about the “politically-motivated firing” of Metcalf.

“The firing of Mr Metcalf for defending press freedom against attacks in Palestine sends the message that support for freedom of the press is contingent,” Corey Balsam, national coordinator for IJV, said.

“With Israel’s blockade of access points to the occupied Palestinian territories, local reporters are among the few sources of information coming out of the region,” added Balsam.

“Canadian Journalists for Free Expression was right to condemn the killing of their colleagues as well as other lethal attempts to silence Palestinians’ right to protest, much as they do in other contexts.”

CJFE was not the only media watchdog to issue a statement condemning the lethal force used by Israeli forces. Reporters Without Borders accused Israel of “deliberately shooting” journalists in Gaza.

The US-based Committee to Protect Journalists went a step further in their statement, referring to those responsible for Murtaja’s death as “killers” in its headline.

Neil Macdonald, an opinion columnist for the Canadian Broadcasting Corporation (CBC) who has also reported from the occupied Palestinian Territories, argued that excesses of Israeli soldiers are almost never punished. That’s why, he said, criticism from organisations like CJFE or the International Criminal Court are important.

“For a journalist working in Gaza or the Occupied Territories, a PRESS badge offers limited protection at best. For a Palestinian journalist, it clearly offers none at all,” Macdonald wrote.

« Today in History – April 18 (Previous News)
(Next News) SCIENCE: How to choose the perfect baby »

USA: ‘I Don’t get confused.’ Nikki Haley fires back at White House – VIDEO