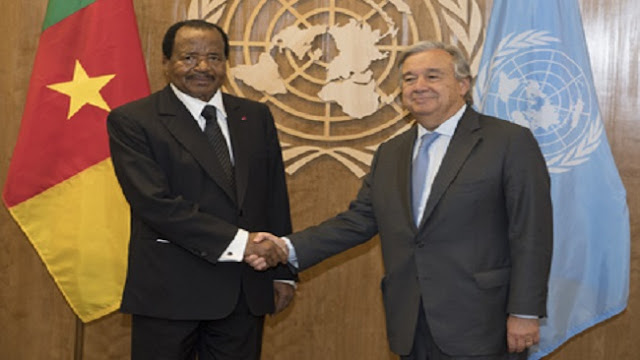 DAKAR (Reuters) – The United States has accused the Cameroonian government of “targeted killings”, arson and looting in its fight against an Anglophone separatist movement.

In a statement following a meeting with President Paul Biya on Thursday, the U.S. ambassador to Cameroon called for dialogue to end an 18-month-old conflict.

English-speaking rebels have killed over 20 gendarmes and tens of thousands of people, mostly English-speakers, have fled to Nigeria to escape army reprisals.

The unrest has destabilized the mostly French-speaking Central African oil producer, months before an election in which Biya will seek to extend his 35-year-old rule.

Reuters reported in February that soldiers had burned down houses with people inside and shot unarmed residents as part of a military offensive to root out the separatists in the Northwest and Southwest regions.

The Cameroon army and government has denied mistreatment of its English-speaking minority.

“The month of April has proven the bloodiest so things are not getting better,” said U.S. ambassador Peter Henry Barlerin.

He said Cameroon authorities had authorized “targeted killings, detentions without access to legal support … and burning and looting of villages”.

The separatists have committed “murders of gendarmes, kidnapping of government officials, and burning of schools”, he said.

Leading separatists have claimed responsibility for such attacks.

What started as peaceful protests in late 2016 calling for greater representation for Cameroon’s English-speaking regions has morphed into a full blown secessionist insurgency, partly in response to the government’s clampdown on demonstrations.

Witnesses and rights groups have said the army has used helicopter gunships to fire on protesters, allegations the government denies. —— AUTO – GENERATED; Published (Halifax Canada Time AST) on: May 18, 2018 at 01:49PM

CUBA: Only 3 out of 104 survive Boeing 737 crash at José Marti International Airport