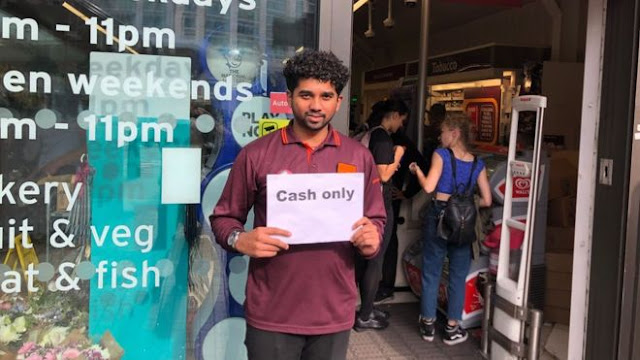 BBC – Card payments are failing across the UK and elsewhere in Europe, Visa has said.

Customers have been complaining that payments are being declined, but some report contactless transactions are proving more successful.

Barclays and Bank of Ireland advised customers to use ATMs to withdraw cash, which appear to still be working.

Visa is working to resolve the issue but one payments firm said transactions were now working intermittently, but there was a backlog.

The Payment Systems Regulator told the BBC it understood the problem to be limited to Visa card payments only.

Mastercard and American Express both said their networks were working.

Supermarket Tesco said chip and pin payments were not affected, but contactless payments were. Sainsbury’s also said it was experiencing problems.

Responding to complaints on social media, HSBC said there were issues with processing Visa payments, which were intermittent, but were “slowly recovering”.

Jay Curtis, 32, is in Swansea and had two cards declined in B&Q.

“I didn’t have cash on me so I had to drive all the way home.”

The Bank of England, which oversees electronic payment providers such as Visa, said it was “aware of the issue currently affecting Visa and working with the firm to resolve the situation”.

Transport for London said it expected customers to still be able to use their contactless payment cards to pay for travel on its buses, trains and Tubes.

However, Paymentsense, which runs card services for small businesses, said transactions were now starting to go through but there was a backlog.

« ZIMBABWE: So what changed after Mugabe’s fall? NOTHING! (Previous News)
(Next News) UGANDA: Museveni;s wife shocked parents can’t feed own kids – I AM THINKING THEY MAY BE RAN OUT OF CAKE???? »

FOOD: How to get good goat breeds