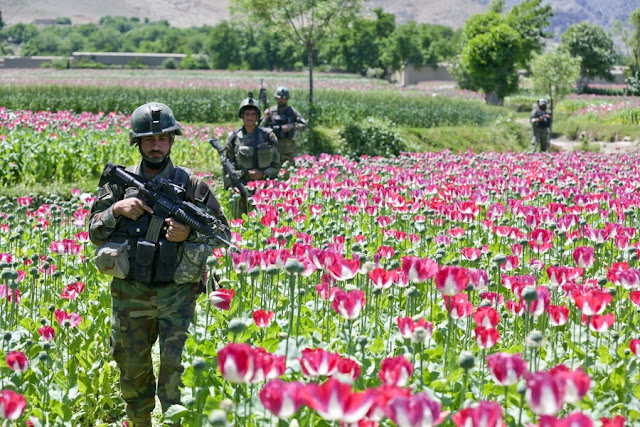 KANDAHAR, Afghanistan (Reuters) – Afghan farmers are busy in their poppy fields as the annual opium harvest begins, underscoring the government’s failure to stamp out a crop that yields much of the world’s supply of heroin.

“We don’t get enough money if we grow wheat or other crops,” said Mohammad Nadir, 35, as he gathered the crop he planted last year on two acres of land in the southern province of Kandahar.

It is Afghanistan’s second major center of cultivation of the opium poppy after the neighboring province of Helmand, and a hotbed of activity by Taliban militants.

Nadir scraped the gum from poppy bulbs into plastic containers to be used in making opium, heroin and other drugs.

His annual yield will generate more than $3,000 in income. That compares with a take of less than $1,000 if he switches to growing wheat on the same land, as authorities hope.

But Nadir will have to share his profit with the Taliban, in exchange for which they protect poppy fields and find domestic and international smugglers to sell the illegal produce.

The insurgents extract a large share of their revenues from narcotics, a trade the United Nations values at roughly $3 billion a year in Afghanistan.

Despite years of effort to replace it, the banned crop is a vital part of the south Asian nation’s economy. Opium production hit a record in 2017, up 87 percent over 2016, the U.N. says.

Last year, the government distributed more than 10,000 tonnes of seeds to farmers to persuade them to grow wheat along with 20,000 tonnes of urea, widely used as fertilizer for foodgrains.

Many farmers collected seeds to grow wheat but did not plant them, said Akbar Rustami, a spokesman for the agriculture ministry in Kabul, the capital.

“We tried to discourage farmers from sowing poppy seeds but they continue to ignore our orders because they want to earn more money,” he said.

It launched more than 500 criminal cases against farmers and civil servants for allowing illegal cultivation.

American and Afghan forces have begun a campaign of air strikes against drug refining and manufacturing laboratories in southwestern Afghanistan, aiming to choke off Taliban revenue.

“We need a special task force to stop farmers from sowing poppy,” said Najibullah Ahmadi, who oversees the drive to ban poppy cultivation. “We need helicopters to conduct aerial surveillance.”

The government has failed to provide alternate sources of income, said Nadir, the farmer in Kandahar, who worries about providing for his five children.

“We want the government to find us jobs and pave the ground for alternative farming. If there is a good alternative, there won’t be any need for cultivating poppy anymore.” —— AUTO – GENERATED; Published (Halifax Canada Time AST) on: April 30, 2018 at 12:43PM

CONGO and OPEC: A marriage of mutual need