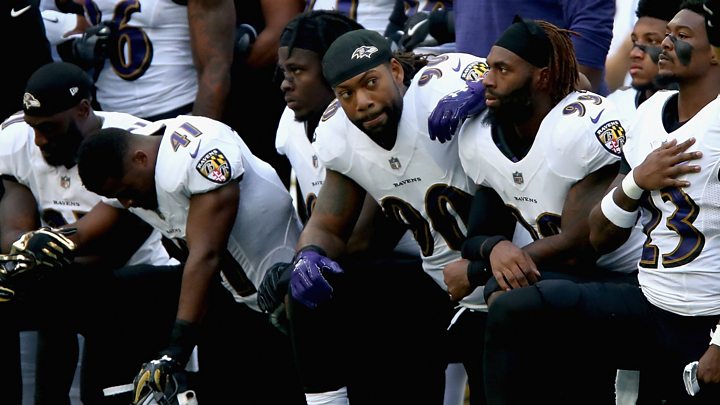 NFL teams will be fined if players kneel for the US national anthem under a new policy.

BBC – The American football league said players who do not stand for the Star-Spangled Banner can stay in the locker room until it has been performed.

The NFL also vowed to “impose appropriate discipline on league personnel who do not stand and show respect for the flag and the Anthem”.​

Players said the protests were against police brutality of African Americans.

“It was unfortunate that on-field protests created a false perception among many that thousands of NFL players were unpatriotic,” said NFL Commissioner Roger Goodell in a statement accompanying Wednesday’s new policy.

“This is not and was never the case. This season, all league and team personnel shall stand and show respect for the flag and the Anthem.”

Decoding the NFL protests
Kaepernick: From one man to a movement
What must Americans do during the anthem?NFL players were previously required to be on the field for the anthem, but there was no firm directive to stand during the song.

The policy includes the provision that clubs can develop their own rules – so long as they abide by the league’s directive – to handle players who do not wish to stand.

It does not state how much clubs will be fined should their athletes protest on the field, but gives them the option to impose penalties on any player who breaks the new rules.

The statement comes a day after NFL teams pledged $90m (£67m) towards social justice initiatives, under an agreement reached with all 32 teams in the league. 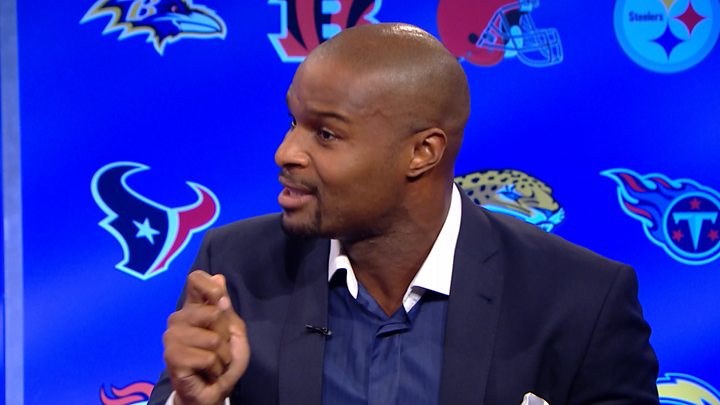 The debate over the kneeling protests began in 2016, when San Francisco 49ers quarterback Colin Kaepernick refused to stand for the anthem.

Similar demonstrations spread across the league, where most players are African American. 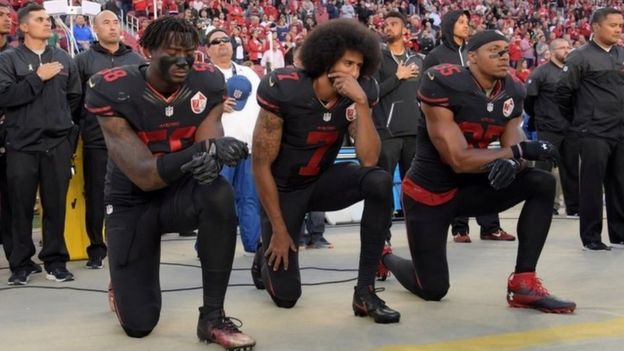 President Donald Trump was highly critical of the protests, calling them “disgraceful” and unpatriotic. He also urged the players to be fired.

US Vice-President Mike Pence walked out of an NFL game because players from Mr Kaepernick’s team knelt during the anthem.
Trump-1, NFL-0

Donald Trump started a staring contest with the NFL, and the NFL just blinked.

What began as a few unscripted presidential comments at an Alabama campaign rally escalated into a public relations nightmare for America’s most popular sports league, which saw its patriotism questioned from the White House bully pulpit.

Within a matter of weeks the NFL’s popularity plummeted among conservatives and its financial bottom line was threatened – stark proof that Mr Trump can drive the opinions of his supporters even when his target is a national juggernaut that has spent years branding itself as a shared American cultural experience.

Now protesting athletes, who always insisted they were kneeling to draw attention to the abused and ignored victims in American society, will have to save their demonstrations for the solitude of the pre-game locker room.

On the field, expressed love of anthem and flag will be mandatory. 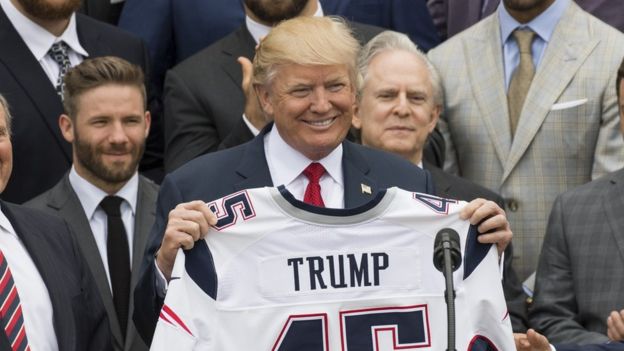 Image copyrightGETTY IMAGESImage captionMr Trump holding a customised Patriots jersey he was presented with earlier this year
What’s the reaction?The NFL Players Association (NFLPA) issued a statement following the policy announcement saying they were not consulted.

“NFL players have shown their patriotism through their social activism, their community service, in support of our military and law enforcement and yes, through their protests to raise awareness about the issues they care about,” the statement reads.

“The vote by NFL club CEOs today contradicts the statements made to our player leadership by Commissioner Roger Goodell and the Chairman of the NFL’s Management Council John Mara about the principles, values and patriotism of our League.”

The union said it will be reviewing the policy and will challenge aspects that are inconsistent with the collective bargaining agreement. 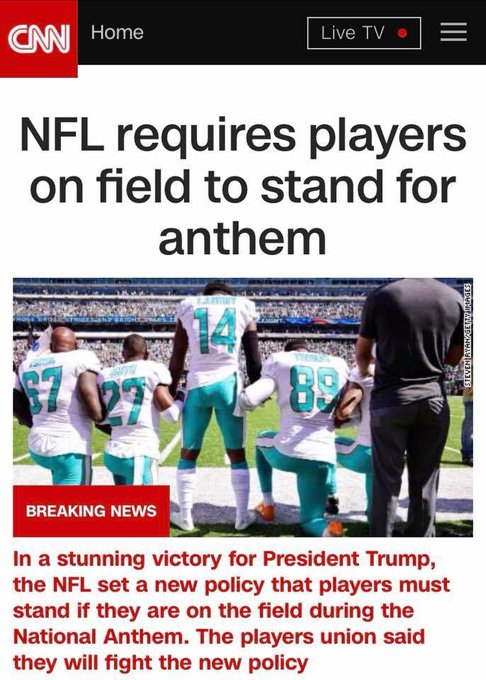 Have NFL ratings suffered?President Trump has repeatedly claimed credit for a ratings slide in the NFL. Last year the league saw a nearly 10% drop in viewership, according to Nielsen data. In 2016, there was an 8% decline.

Though some fans appeared to tune out over the national anthem protests, other factors have also been cited.

Some analysts blame the 2017 decline on the proliferation of games added through the expansion of Thursday Night Football.

The 2016 presidential election siphoned viewers while the league’s domestic abuse scandal also played a role, according to a JD Power and Associates survey.

League viewership figures were also declining even before the “take a knee” protests as more viewers dumped cable subscriptions.

But NFL games are still among the biggest television attractions. In 2017, NFL games accounted for 37 of the 50 most-watched programmes of the year, according to Nielsen.

Did you find apk for android? You can find new Free Android Games and apps.
Sharing is caring:
trump, Take a Knee, NFL, Black Lives Matter Sports No Comments » Print this News